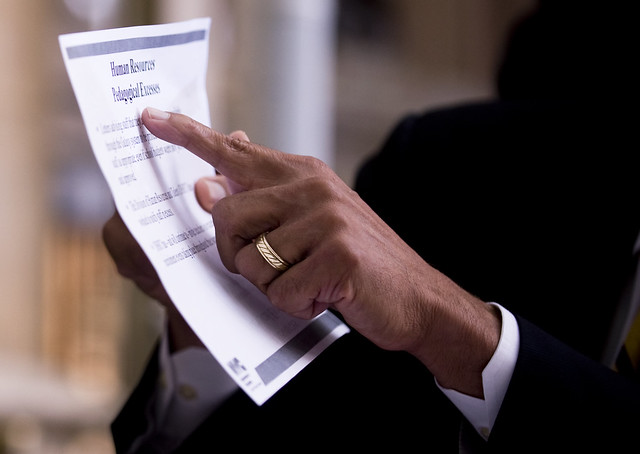 The New York City Council regularly passes bills mandating that city agencies create reports on their work, ostensibly as part of the Council’s oversight responsibilities. From city jail populations to hate crimes statistics to use of force by police officers, the Council has passed bills requiring a report be delivered to it.

The Council passes so many reporting bills that last year, it passed legislation that would help it track the number of total reports required under local law, the City Charter, or mayoral order. The bill compelled the city’s Department of Records and Information Services to create a central list of every single report required from every city agency, board, or office.

The result: a 57-page document that lists a whopping 842 required reports of various types due at a variety of time intervals. Of those, 490 are listed as not received by DORIS, despite some being producing by agencies on a regular basis, raising questions for Council members about whether agencies are refusing to comply with the law or are overwhelmed with burdensome reporting mandates.

The Council often requests information from city agencies to gauge the effectiveness of city services and programs and to decide on annual budget allocations. City agencies, however, can sometimes be less than forthcoming, necessitating that the Council put the force of law behind their inquiries.

But agencies just as often fall out of compliance with their reporting requirements, which even City Council Members admit can be onerous and time- and resource-intensive. Council Members themselves can forget about their requests once they’ve been legislated. Some have questioned whether passing a “reporting bill” is good for a press release or constituent newsletter but leads to little follow up from the Council members who insist on their importance.

The initial posting of the list, which was due July 1, shows that the mayoral administration, city agencies and boards, and the Council have a long way to go to prove that the reporting bills so frequently passed are actually essential to effective and efficient city government, and getting completed and used.

“Transparency is essential for responsive and effective government. We need accurate and up-to-date information to be easily available to the public,” said Council Member Fernando Cabrera, who sponsored the bill as chair of the governmental operations committee, in a statement to Gotham Gazette. Cabrera inherited the bill from former Council Member James Vacca, who introduced it last session as chair of the technology committee but was term-limited out of office before it passed.

Cabrera said the bill was a response to a review that showed reports from several years either missing from agency websites or unavailable on the DORIS website. His legislation now requires a full list of all such agency reports, the frequency with which they are due, the law mandating them, and the date they were last published.

For example: The Department of Homeless Services’ shelter repair scorecard, due every quarter and last delivered to DORIS on July 15. The Department of Buildings report on injuries and fatalities at construction sites, produced monthly and submitted to DORIS but marked as not received on the list. The Department of Corrections’ latest report on punitive segregation in the third quarter of 2019, available on the DOC website but listed as last received by DORIS in July 2014.

Starting in January 2020, the report will also have to include links to the reports online, and DORIS will be required to request each report from a specific agency if it is not delivered within ten days of its due date.

“People have a right to easily access the information that the law requires be made public. This is about accountability,” Cabrera said.

For some agencies, such as the Department of Education, the Council also has a limited ability to pass new laws dictating policy or procedure, and has to instead rely on requiring greater transparency that can lead to better oversight. “There's nothing more meta than a report on reports,” said Council Member Ben Kallos, a member and former chair of the governmental operations committee and co-sponsor of the legislation, in a phone interview.

“As a legislator, I try to avoid legislation that requires a report, a task force or a study, because they always seem like a waste of time,” Kallos added. “I prefer to focus on legislation that just does things. That being said, with certain non-city agencies, we're left with no other choice.”

The current report includes dozens of city agencies and the information they are meant to publish everywhere from just once to monthly, quarterly, annually, or every two, five or ten years. The Department of Environmental Protection tops the list in number of required reports, with a total of 48; the Department of Transportation is second with 41; the Department of Health and Mental Hygiene is meant to produce 35 reports; and the NYPD is mandated to provide 34.

A glimpse at the report of reports might give the impression that agencies are being negligent with their reporting responsibilities, given that 490 of the 842 are listed as not received. But the list is far from perfect. Those reports that are listed as having not been received include many that have been created and are regularly maintained by city agencies on their websites, which is part of the problem that Cabrera pointed to in his statement.

Ironically, the report even notes that DORIS itself has not submitted an annual report “on powers and duties, cost of savings,” as required by the City Charter.

Jose Bayona, a spokesperson for the mayor’s office, said the discrepancies stem from processing the hundreds of required reports which, for a small agency like DORIS, is an intensive task. “It takes time,” he said. Reports may have been sent but not included in the list or have not been sent and DORIS has pushed agencies to provide them, he added.

“DORIS continues to expand content on the government publications portal by working with agencies to submit all of their reports, as required by the City Charter,” Bayona said in an email. The publications portal is meant to contain digital copies of every report produced so far by city agencies, commissions, and boards. “The number of reports available on the portal has increased from 4,180 in [Fiscal Year 2015] to 23,089 today.”

On DORIS’ annual report, Bayona explained, “DORIS submits data about its powers, duties and costs in the [Mayor’s Management Report] and considers that to be an annual report. Nevertheless, the Librarians listed the charter requirement for an annual report as a separate document because one of the Council’s requirements is that the Library list all required reports.”

For Council members seeking greater transparency from the administration, the report is illuminating, even with its deficiencies. “I can’t say I’m not disappointed,” Kallos said, pointing to the picture of “rampant non-compliance” that emerges from the report. He said agencies often withhold reports from the City Council that they are required to provide.

“It's no surprise that if they didn't send reports to the City Council, that they didn't follow their charter requirement to submit them to the Department of Records and Information Services. After all, very few people even know that DORIS exists.” He did concede that perhaps agencies themselves are unaware of their responsibility to send reports to DORIS, an issue that this new report might rectify.

Kallos said he often requests reports from agencies which they will send to the Council but not to him, leaving him to track them down. Then, agency officials will embarrass him at City Council hearings. “It's a game of cat and mouse in the very worst way of Tom and Jerry where the mouse actually clobbers the cat,” he said, noting that the DORIS report would help him in those efforts. “If there's a report I can't get my hands on and [DORIS] can't either, then it seems like maybe the agency didn't do their job.”

Council Member Ritchie Torres chairs the Committee on Oversight and Investigations, and he said the report of reports is a valuable tool for the Council’s scrutiny of the administration but might also prompt a more “holistic” review of how the Council requests information.

“Reporting bills can be a powerful advocacy tool for shining a spotlight on a matter of public concern,” he said in a phone interview. “But here's the problem. Even if a reporting requirement has merit, the accumulation of the requirements over time becomes a real imposition on a city agency. The notion that a reporting bill has no fiscal impact is something of a myth.”

Similarly, as the city’s new reporting on reports law went into effect July 1, state legislators in Albany are looking into whether they are imposing burdensome “study bills” on state agencies. Polltico New York reported earlier this month that State Senator James Skoufis and Assemblymember Brain Barnwell plan to introduce a bill requiring an examination of state study bills. “We do need to, as silly as it sounds, study all of these study bills,” Skoufis told Politico.  “Perhaps if nothing else, it will shine a light on this issue and make us think twice about just doing study bills to make a political statement.”

Torres said the Council should refocus on a more demand-based approach to obtaining the reports they need, to ensure that the information being produced is not obsolete.