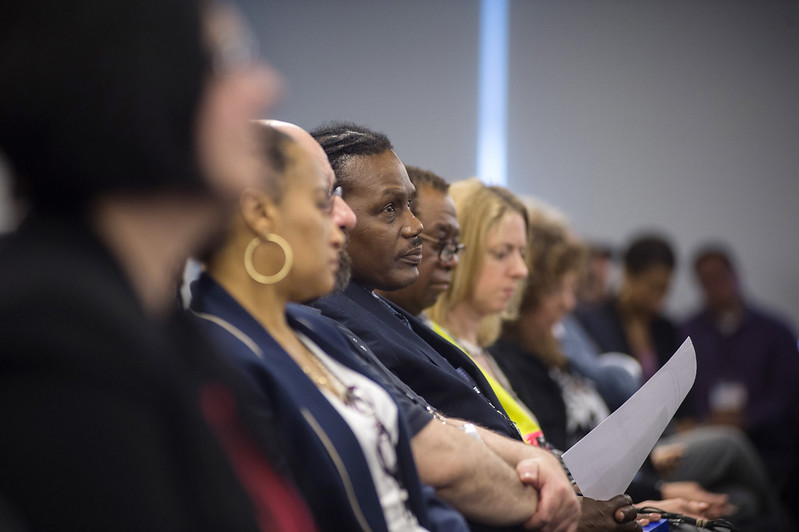 President Trump’s nonstop record of false claims (12,000-plus labeled false or misleading as of an August count in the Washington Post) received a brief respite recently when he tweeted that poverty and unemployment rates for black and Hispanic residents of the United States had reached record lows, which PolitiFact and other media outlets acknowledged as accurate.

While it’s true poverty rates for black and Hispanic Americans are down, as you’d expect, Trump still failed to talk about the whole truth.

Here it is: the causes of these improvements have included nine-and-a-half straight years of economic expansion, demographic changes that have brought people of color to 50% or more of the entering-prime-age workforce, and record levels of educational attainment. (Of course, the president did not comment on the continued severe racial and ethnic disparities in American society faced by people and communities of color.)

A closer look at some United States and New York City economic, poverty, and educational attainment data over time helps put the president’s point in the context of the profound racial injustices and disparities that are part of our society.

Most Prime Workers are People of Color
The Washington Post presented the table below in a September article entitled, “For the 1st time, most new working-age hires in the US are people of color.“ 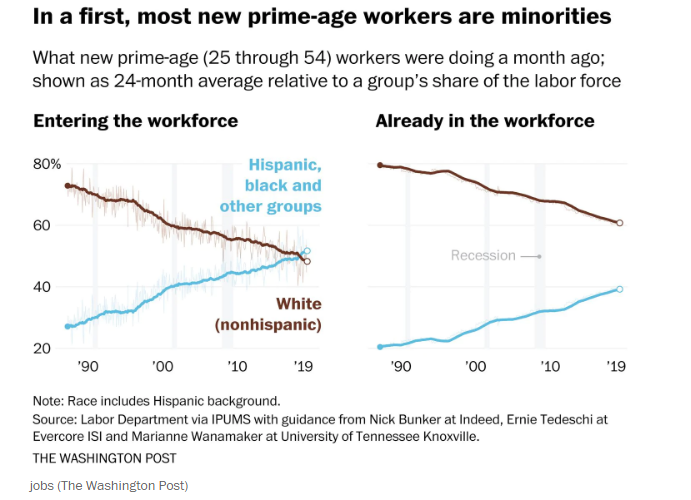 In other words, one major reason black and Hispanic Americans are doing better is pure demographics -- they are half the new people getting jobs because they are half the people (along with other people of color) entering the labor force!

U.S. Recessions and Expansions Seriously Impact Poverty
The economic history of recessions and expansions, with increases and decreases in poverty rates, is not new. Below is a look at poverty in the United States from 1959 to 2010. In 1959, 55% of black Americans lived in poverty. The graph does not show it, but poverty for whites in 1959 was 18%. 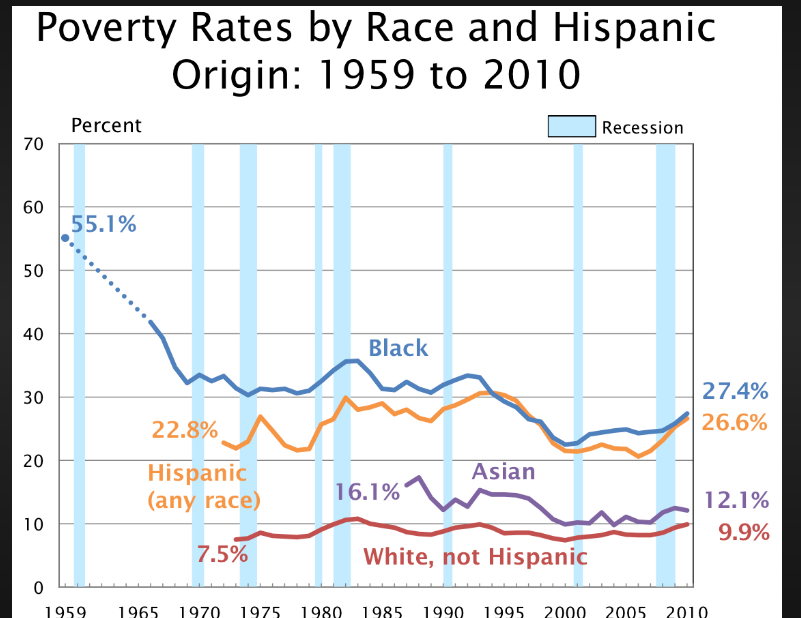 Following a recession in the early 1990s, President Clinton oversaw an eight-year economic expansion that brought job gains of more than 22 million from 1993 to 2001, about the same as the current national expansion. The poverty rate in the United States in the year before Clinton became president was 14.5%, but much higher for blacks, 33.3%, and for Hispanics, 29.3%, according to U.S Census data.

As the health of the American economy improved, poverty rates declined again. By the end of President Obama’s second term, in 2016, the overall rate was 12.7%, and poverty rates had declined for blacks to 22.0% and for Hispanics to 19.4%. It took gains of 16 million jobs from 2010 to the beginning of 2017 to bring these poverty reductions.

What About New York City’s Poverty Rate?
New York City’s poverty rate has hovered around 20% of its population for decades, according to a 2011 New York Times article based on census data.

People of Color, Despite Discrimination, Have Achieved Record Educational Attainment
It’s hardly a secret that the American economy has transformed itself into a service and information economy with higher demand for educated workers. People of color in the United States (and New York) have persevered in the challenge to gain skills, despite significant barriers. Black, Hispanic, and Asian populations have achieved record educational attainment, a success correlated with hard work in the face of discrimination that is a record in each and every year, very different than the up and down swings of the economy. 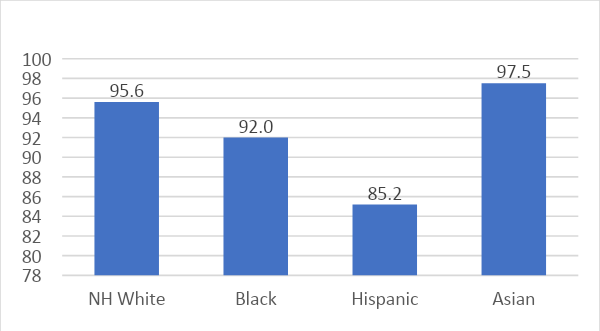 Although younger black and Hispanic Americans are closing the gap with whites in high school completions, for the full population over the age of 25 they still suffer from disadvantages compared to the rest of the nation in the attainment of bachelor’s degrees and higher. 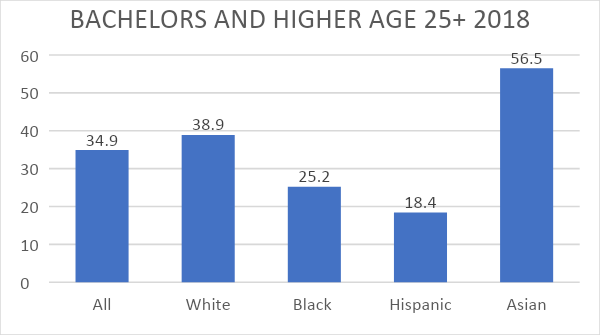 The following table on the history of educational attainment shows the long struggle to move forward for American communities of color, along with the extraordinary disadvantages they suffered compared with whites during U.S. history.*,** 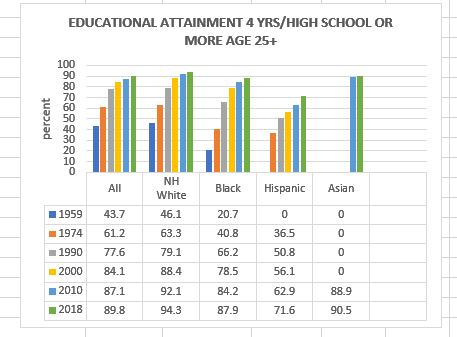 *The Census in 1990 and earlier reports whites, not non-Hispanic whites. The zeros reflect that the Census did not report these numbers in those years.
**1974 is the first year Hispanics are reported separately.

In NYC, High School Graduation Rates for Communities of Color Have Improved Dramatically
In New York City, high school graduation rates for black and Hispanic students have improved dramatically over time, like in the rest of the nation. The table below is from the New York City Department of Education for 2018 and provides the graduation rate for an entering 9th grade group, called a cohort, for August of their fourth year of high school. The cohort is the group of students who entered 9th grade in 2014.

The 2014 9th grade cohort of black students shows 72.1% graduated by August 2018, but DOE statistics also show that 18.6% of the black students in the 2014 cohort were still enrolled but had not graduated.

Looking at the six-year graduation rate for black students, for the 2012 9th grade cohort, 77.5% had graduated and 5.5% were still in school. 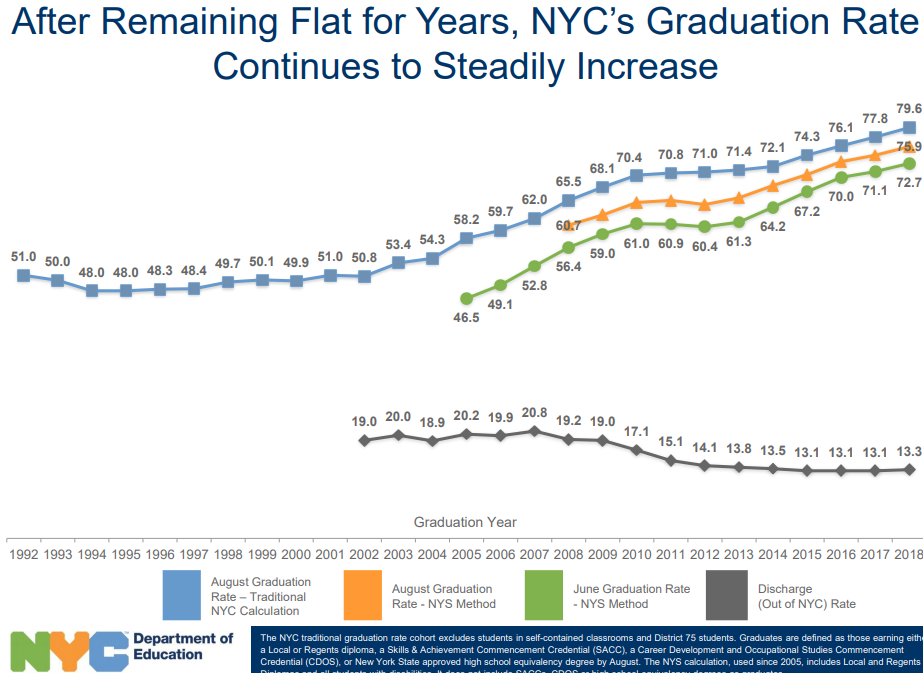 The table below shows the six-year graduation rates, with those still enrolled, for the New York City school system for all students, and black and Hispanic students for the 9th grade cohort that entered in 2001. 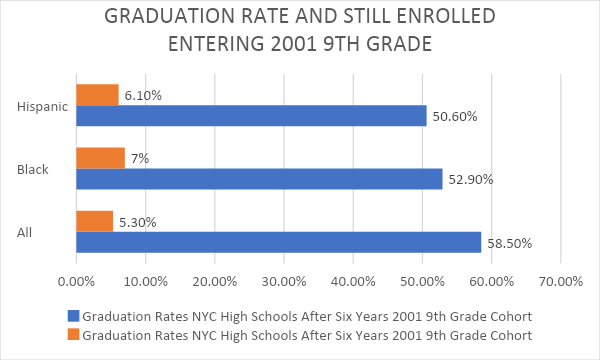 The numbers for students who had graduated after six years or were still enrolled have improved dramatically between the 2001 entering cohort and the 2012 and 2014 entering cohorts.

Educational “Achievement Gap” for NYC Students is Narrowing
The New York City Department of Education also reports on the extent to which the “achievement gap” between black, Hispanic, and white students for high school completions is narrowing. 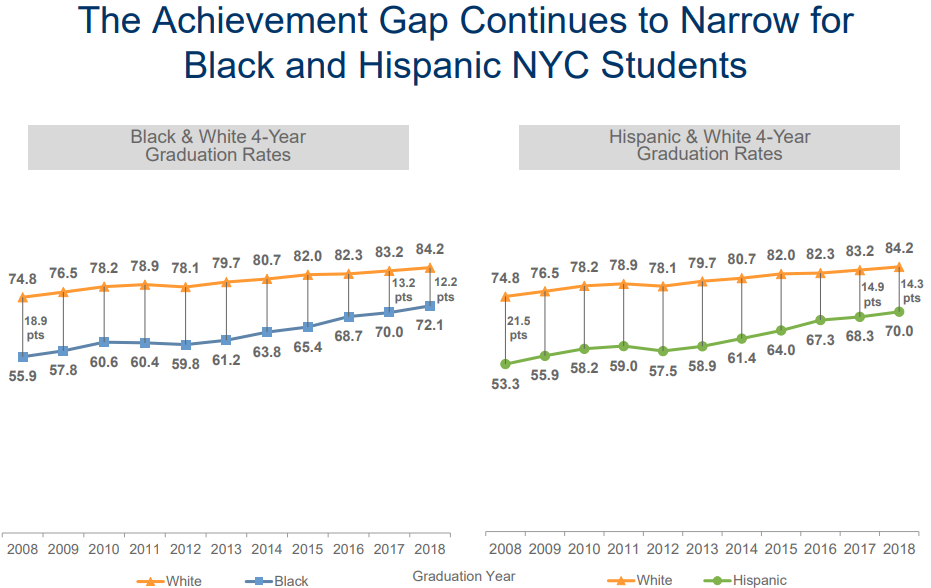 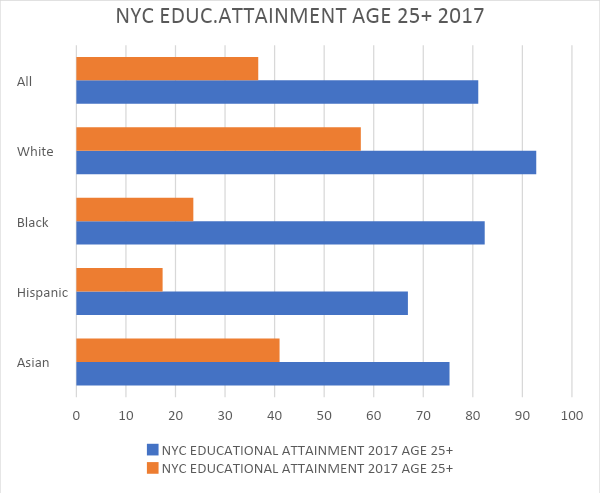 So, while President Trump’s tweet about black and Hispanic populations reaching historically low levels of poverty and unemployment was true, this achievement has nothing to do with advances brought forward by his administration. It’s been a slow and overall steady – but sometimes rocky – climb, which includes almost a decade of straight economic expansion, demographic changes that have brought people of color to 50% or more of the entering prime age workforce, and record educational attainment for black and Hispanic Americans.