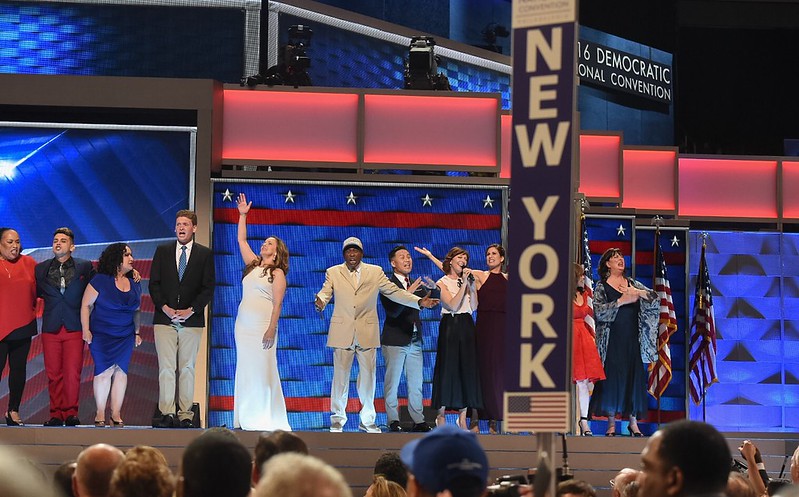 In many states, State Committees are a big deal. They are the primary strategic planner for their party’s political efforts, and a key conduit for funding to candidates and local organizations. In New York, not so much. This is largely a function of the State Party’s leadership, and that attitude is well reflected in the State Committee’s picks for New York State’s DNC representatives.

In the DNC, each state is awarded representation through the state party’s Chair and Vice Chair, as well as members apportioned by a formula that accounts for population, Democratic Party enrollment, and votes cast for the Demcoratic candidate in the most recent presidential election. As a large, Democratic state, New York has a large voice on the DNC. The state’s influence is also felt in the fact that two of the DNC’s Vice Chairs, elected by the DNC members, are New Yorkers, further boosting its vote total.

As an influential, ethnically diverse state with a population almost evenly split between urban and non-urban residents, New York is uniquely positioned to champion a Democratic message that appeals to a broad swath of Americans. It’s hard to believe it does this, though, given the chosen composition of the state’s DNC delegation.

New York’s dismal failure in representation is meaningful, but it would be hard to know it. The DNC makes it extremely difficult for people to acquire the voting records of DNC decisions. An attempt to uncover how New York’s delegation voted on holding a climate debate and issue-based forums in the current presidential primary ran into an initial dead end with the New York State Committee, which says it doesn’t ask members how they vote, and the DNC, which says it only tells DNC members the voting results. This all seems odd for a body whose members are theoretically elected by, and responsible to, State Committees.

Ultimately, I obtained the rolls and they reveal that of New York’s 15 members (including those not elected by the State Committee), only two voted in favor of the holding a climate debate. Perhaps more shockingly, only eight of those who cast votes were there in person (it cannot be determined if the six New Yorkers who didn’t cast votes were present, though it seems likely they were both absent and without a proxy since they were not counted as abstentions). Regardless of how one feels about the climate debate, it seems likely that a different composition of the DNC delegation -- one more diverse, younger and engaged -- could have changed the vote total as well as the number of delegates that attended the meeting.

Last year, one of New York’s DNC seats was left vacant by the passing of Assemblymember Denny Farrell. On October 15, at their fall meeting, the State Committee selected his replacement. In the end, three candidates from Upstate New York ran: Buffalo Mayor Byron Brown, State Committeewoman Kelleigh McKenzie, and State Committeewoman Elisa Sumner. Brown, who also served as Governor Cuomo’s heavy-handed Chair of the State Committee until he was ousted after the 2018 scandal involving a mailer falsely smearing Cuomo’s primary opponent, won with over 60% of the vote.

While the election of an African-American man from Upstate is a step in the right direction, it remains palpably insufficient. African-Americans are the only minority group adequately represented in the DNC delegation while a single upstate member shortchanges nearly half the state’s population -- particularly the part most experienced in winning elections against Republicans.

Brown’s election also represents a continuation of the political status quo. As a long-term ally of Governor Cuomo and a State Chair who often ignored the democratic process, Brown’s ascension to the DNC is likely to maintain New York’s support for business as usual.

If people feel detached from the mechanics of the Democratic Party, they needn’t. In 2020 voters will have a chance to elect their State Committee members -- one male and one female per Assembly District. Those members will then immediately meet to select New York’s DNC members. In the past, the State Committee has rubber-stamped a slate chosen by the Democratic Party elite composed mainly of elected officials and power-brokers. Next time, it looks like there could be a contest for DNC membership and a push for a Democratic Party that represents New York’s Democrats.

***
Ben Yee is a civic educator and organizer in New York City. He is a Democratic State Committeeman for New York’s 66th Assembly District. On Twitter at @yben.