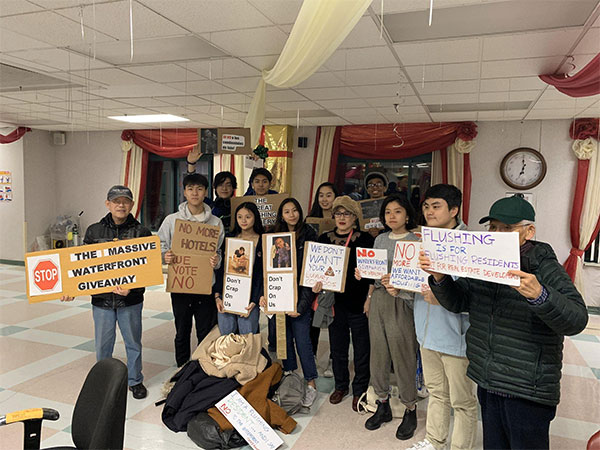 Most Flushing community stakeholders, including at least one Community Board 7 member, learned from a December YIMBY article that a massive waterfront rezoning and special district application had been certified by the City Planning Commission, initiating the seven-month Uniform Land Use Review Procedure that could make it a reality.

Eager to learn the details of the proposed rezoning and new development, the January 7 CB 7 land use committee meeting was attended by so many unfamiliar faces such that the committee chair asked everyone for a brief self-introduction.

While Flushing resident and activist Bobby Nathan was among a handful of attendees who expressed their opposition to the Special Flushing Waterfront District rezoning that evening, many others in subsequent meetings joined him. Initially protestors were dismissed for being “rude and inconsiderate,” then five NYPD officers were called to the January 21 meeting due to a group of protesters holding signs stating sentiments such as “We don’t want your

The Special Flushing Waterfront District proposal would add nine buildings for a total of 13 towers (four buildings provide a base for two towers each) in a 29-acre site bounded by 36th Avenue to the north, College Point Blvd to the east, 40th Road to the south, and the Flushing Creek to the west. All the proposed towers except for two will exceed the FAA height restrictions in the primary approach path to LaGuardia Airport, which is less than two miles away.

These towers would add 3 million square feet in luxury hotels, residential condos, retail, and office space. The addition of 1,725 luxury residential condos represents more than half of the total volume of luxury condos added to the Flushing market in the past decade. To facilitate pedestrian and vehicular circulation, a network of “publicly accessible” private streets and private extensions of existing mapped streets will connect the cluster of mixed-use towers.

The development team’s presentations emphasize the introduction of an urban scale and improvements in the public realm as primary community benefits. However, the architectural renderings underscore the utility of the open space, which largely serves to provide relief from the massive building bases lined with ground-level retail storefronts rather than accommodate passive or active recreational use.

The public realm includes a pedestrian path that will connect the new blocks along the Flushing Creek (which remains polluted by combined sewage and stormwater overflows). The other community benefit is a miniscule 61 units of affordable housing at 80% of Area Median Income (AMI) equal to $85,360 for a family of four, while the median household income in downtown Flushing is closer to $41,000.

Despite the massive scale, complicated and layered environmental matters including the remediation of brownfields and the Flushing Creek, construction in a coastal flood hazard area and hurricane evacuation high-risk zone, and outstanding public safety concerns due to the proposed building heights that potentially obstruct airplane navigation, the Department of City Planning issued a negative declaration on the Environmental Assessment Statement, meaning that the agency found “no significant effect on the quality of the environment.”

The negative declaration eliminates two pre-ULURP opportunities for public review and comment on the socioeconomic, environmental, and neighborhood impacts of this complicated and transformative special district and rezoning application.  Because of the negative declaration, Flushing stakeholders were denied an opportunity for a public scoping hearing to comment on topics that should be part of an Environmental Impact Statement, and another opportunity to review and comment on a comprehensive Draft Environmental Impact Statement.

The Department of City Planning explained the negative declaration is merited because the development area is a commercial (C4-2) zone and the proposed new density and uses are as-of-right.  Only a small portion of the development site will be rezoned from a manufacturing (M3-1) zone to a mixed manufacturing-residential (M1-2/R7-1) zone.

Department of City Planning’s explanation, however, is deceptively simplistic.  Since the development site is comprised of numerous lots, several that are large (in the range of 100,000 square feet) and deep (as they are bounded by College Point Blvd and the waterfront, reaching 582 feet in depth) and varied in topography and grade (downward slope to the Flushing Creek), the as-of-right zoning is “fairly restrictive.”  Moreover, the 1998 Waterfront Access Plan applies to the site and requires provision of “a shared public walkway, upland connections to the public walkway, and visual corridors.” Given these significant site constraints, a special district designation is essential for the developer-owners to maximize the commercial (C4-2) zoning bulk and density parameters.

To resolve these challenges, the three property owners formed FRWA LLC to work with the Department of City Planning and a small army of master planners, architects, engineers, and lawyers to divide the 29-acre area into buildable sites that facilitate visual corridors connected by privately owned and managed streets.

In order to maximize the commercial (C4-2) as-of-right buildable floor area, the special district requires a waiver to permit 11 towers to exceed the FAA’s strict height restrictions. Moreover, the special district lowers the parking to a commercial (C4-4) zoning that requires one parking space per 1,000 sq. ft. rather than per 300 sq. ft. in a C4-2.

In contrast to City Planning’s position that the proposed density is as-of-right, a Special Flushing Waterfront District to waive FAA restrictions, modify WAP zoning controls, and stipulate additional state and federal environmental approvals is necessary for FRWA LLC to maximize their C4-2 development rights.  In order words, the proposed waterfront district is not truly as-of-right because the development scheme is dependent on numerous waivers and modifications of land use rules.

FWC LDC hired ARKF to conduct baseline land use, zoning, and environmental studies of a larger 60-acre study area. In 2014, FWC LDC transferred the remaining $800,000 of the BOA grant to the Department of City Planning to complete these studies and prepare a zoning proposal. During this stage of planning, City Planning dubbed an 11-block portion of the waterfront area (approximately 47 acres) Flushing West, and expanded the scope of the zoning study to include new affordable housing production as part of Mayor de Blasio’s Housing New York plan. Crain’s New York Business reported on this highly unusual arrangement:

“The role of the (FWC LDC) in the planning process and the money it will be paying the department raise questions about who is actually running the show in this part of Queens and how much real estate interests who support the initiative— including members of the development corporation's board—stand to gain.” 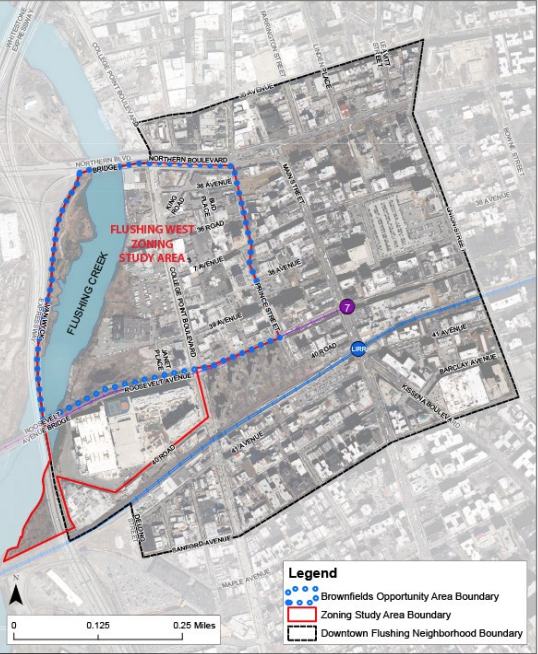 Described as “under the radar,” Flushing West joined Brooklyn’s East New York and Jerome Avenue in the Bronx as the first neighborhood rezonings eyed for implementing the mayor’s mandatory inclusionary housing policy.

The Flushing Rezoning Community Alliance led by the MinKwon Center for Community Action, Faith in New York, and St. George's Church was formed in July 2015 to advocate for an inclusive planning process and deeper housing affordability.  It prepared a report highlighting substandard neighborhood conditions and detailing recommendations for an equitable rezoning. Less than a year later on May 27, 2016, City Council Member Peter Koo wrote a letter to then City Planning Commission Chair Carl Weisbrod detailing outstanding infrastructure constraints and pressed the point that the Flushing West rezoning would be equivalent to "stuffing 10 pounds of potatoes into a five pound bag." ​The city ceded to Koo’s request and ended the Flushing West Neighborhood Planning Study.

While Flushing West ceased to be a city-led rezoning, the Department of City Planning continued to work with FWC LDC on a smaller area comprised of the lots owned by the three major developers that formed FRWA LLC. They are F and T Group, United Construction & Development Group, and Young Nian Group LLC, a Chinese transnational development group that purchased the former Korean supermarket Assi Plaza, after several speculative flip sales, for $115 million. In consultation with Community Board 7’s executive committee, this public-private collaboration completed the Flushing waterfront special district and rezoning application.

Department of City Planning served an integral role in preparing a Special Flushing Waterfront District plan that maximizes private development rights and profits. In response to the 2015 Crain’s article that questioned DCP’s consultant role to the FWC LDC, Queens Department of City Planning Director John Young wrote, “In short, the LDC has no veto power over our work. Rather, the public does - via the city's transparent and multilayered public land-use review procedure.”

However, the Department of City Planning’s negative declaration on the EAS has eliminated pre-ULURP opportunities for public review and comment on a complex special district and rezoning application.  In response to my request for clarification on the EAS, the Queens City Planning office suggested I contact an associate at Stroock, the law firm that represents FRWA LLC.

ULURP ends with the New York City Council, and Council Member Koo’s vote will determine the fate of the Special Flushing Waterfront District. In addition to detailing the challenges due to overdevelopment and the outstanding need for affordable housing, Koo’s May 2016 letter noted that developers informed him the Flushing West rezoning represented a downzoning and since "the numbers didn't add up," “it is actually more financially feasible for them to have an empty lot.”

Apparently, City Planning, FWC LDC, and the FRWA LLC’s army of experts figured out how to make the numbers work to move ahead with the waterfront district plan. The question now is, will Council Member Koo maintain a principled position and reject a rezoning that augments environmental risks and socioeconomic burdens, and supercharges the gentrification of Flushing?