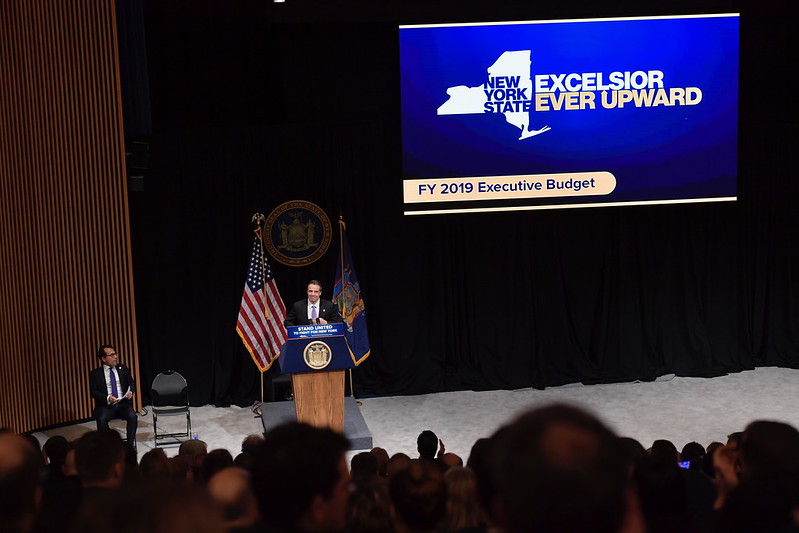 The New York State Division of the Budget surprised the public this past November with an announcement the State faced a $6.1 billion deficit to close for the 2021 budget due by April 1, 2020. The DOB disclosed in its Mid-Year Update that Medicaid costs were exploding -- dramatically more than anticipated -- in both the budget adopted in April 2019 for the current year (fiscal year 2020), as well as for the next one (FY 2021). The budget agency said the situation demanded immediate cuts to both Medicaid and the overall budget.

The Cuomo administration, in its January 24 submission to the Legislature of the new budget plan, proposed $2.5 billion in new reductions to the Medicaid program for FY 2021, as well as incorporating almost $900 million in cuts for the current budget year that began being implemented in November.

The governor’s $2.5 billion cut to projected Medicaid spending would be implemented through the appointment of the Medicaid Redesign Team, which includes representatives from providers, unions, and some other groups, and is tasked with reconfiguring services to achieve savings that would reach the target reduction. If unsuccessful, or if the Legislature fails to adopt the MRT redesign, the Cuomo budget plan includes a fallback to an across-the-board $2.5 billion cut. At a joint legislative budget hearing on January 29, the Greater New York Hospital Association testified that those cuts would amount to 10% of the entire Medicaid program in New York.

The City of New York expressed alarm about another proposal in the governor’s budget proposal that would require local governments to pay for increased Medicaid costs that the State of New York has been absorbing in recent years. Mayor de Blasio testified in Albany on February 10 that the city has very little control over the state-run federal program and that this potential cost-shift could force the city to pay $1.1 billion more for Medicaid expenses in its own budget and warned the city’s public hospital system, Health + Hospitals, could be severely affected. The Cuomo administration has disputed the city’s estimates.

DOB Knew A Year Ago Medicaid Costs Were Escalating Rapidly
Despite the public’s lack of awareness of spiraling Medicaid costs, the Division of Budget and the State Health Department knew a year ago, before last year’s budget was adopted, that Medicaid spending was wildly out of control. The Empire Center for Public Policy, an Albany-based think tank and budget watchdog, accused the Cuomo administration of concealing the deficits in a detailed analysis released in December, following months of similar criticism from both the Empire Center and the Citizens Budget Commission. The Empire Center’s work helped blow open the Medicaid budget crisis and helped guide my own analysis.

DOB released documents after the budget was adopted last year that severely under-reported Medicaid spending, creating the impression there was no serious problem. The DOB’s Mid-Year Update was issued late, in late November, for the period April 1, 2019-September 30, 2019, seven months after the April 1, 2019 adoption of the 2020 budget.

As the State Legislature and the governor were finalizing enactment of the 2020 budget in late March of last year, the State Health Department was informing the Division of the Budget that the payments of Medicaid bills were so much larger than anticipated that the State would violate a spending cap on the Medicaid program by $1.7 billion for the fiscal year ending March 30, 2019.

The DOB and the Health Department then deferred the payment of the $1.7 billion to Medicaid providers several days into the new fiscal year that began on April 1, 2019. The deferral meant that the State Medicaid budget for 2019 had run over its projection from a year earlier by 10%, and Governor Cuomo and the Legislature had just adopted a budget, with a baseline Medicaid spending for the start of 2020 that was already $1.7 billion higher than 2019. The whole budget was out of balance as well and not being reported as such.

Despite DOB and the Health Department’s decision to push the Medicaid payment into the new fiscal year, DOB’s 2020 Enacted Budget Financial Plan released in April 2019 contained Medicaid spending numbers that were obviously wrong,

The FY2020 Budget Released by DOB in April 2020 was Clearly Erroneous
Below are the FY2019 and FY2020 DOH Medicaid spending projections taken from the Enacted Budget Financial Plans. The extra $1.7 billion deferred Medicaid payment, which should have been reported in either FY19 or FY20, is nowhere to be found in the excerpts of the Medicaid budget below:

Instead, the deferral and the extra spending appear in the November 2019 Mid-Year Update all rolled into 2020, which now appears as $3.34 billion higher than FY19, bringing the expenditure to $23.82 billion.

Even though the $1.7 billion Medicaid payment was due in March 2019, meaning fiscal year 2019, it is not incorporated into the 2019 results. But DOB knew in April 2019 the payment had been deferred; after all, the agency had ordered it. The real result for FY19 should have been $22.1 billion, presented in April, with a correct projection for 2020. Instead, the Mid-Year Update put all the spending into 2020.

Following October 2019 New York Times reporting, and criticism by budget watchdog groups that the state had delayed Medicaid payments in 2019, DOB acknowledged major problems for the first time in a public document released on October 17, 2019, called the Annual Information Statement, intended for investors in state bonds. The State Comptroller reported on the problem a few weeks later, but it was not until the Mid-Year Update that the state was restating the problems as severe.

Going back to April 2018, the adopted FY2019 budget contained a colossal underestimate of the costs of the Medicaid program, which would affect the 2020 estimate and the 2021 estimate by billions of dollars. Medicaid spending projections simply had no basis in reality. Here’s the Mid-Year Update again, presented in November 2019 but this time with a serious Reality Check:

As stated above, the real baseline for 2019 was $22.1 billion after accounting for the deferred spending. And this made the spending forecasts for 2021 even more spectacularly mistaken. The Mid-Year Update forecasts what the spending would have been but for the abrupt and drastic curtailments implemented months ago and proposed for FY2021.

Why the stupendous error?
Frankly, the State Division of the Budget did not have a handle on all the many forces the state had set in motion for the Medicaid program:

The Federal government’s 100% reimbursement for the Medicaid expansion for Obamacare was scheduled for reduction to 90% in 2020; Comptroller DiNapoli reported in a budget analysis that this reduction would cost the State Medicaid program $1.7 billion in FY2019 and FY2020.

This happened in 2018, adding $140 million to costs, as reported by the New York Times in October.

The state also created other avenues for Medicaid enrollment.

The elderly, the disabled, the mentally ill, and persons with substance abuse problems were required to move into managed long-term care. This included home-care services for existing and new beneficiaries, and a new “consumer choice” program allowed beneficiaries to hire family members, frequently with the assistance of enrollment agents called Fiscal Intermediaries, who could apply for the program on behalf of the potential new recipients.

Applicants could also attest they needed immediate support. While the local government still had to determine eligibility and assess their need for care, beneficiaries were moved into managed long-term care right away. Concern has been expressed that people who are healthy are being moved into the “consumer choice“ program, called Consumer-Directed Personal Assistance, without adequate monitoring.

According to the Empire Center for Public Policy, the state, starting in 2015, has absorbed about $1.3 billion in local spending, with New York City the main beneficiary.

All of these factors seem to have meant that the Division of the Budget and the Health Department just couldn’t keep track of the combined impact of so many new drivers of Medicaid spending.

What now?
The state (and the Medicaid program) got a lucky break at the beginning of 2020. Tax revenues were reported up by $1.5 billion over the April 2019 estimate, and the state used the money to absorb much of the added Medicaid spending and eliminate the need to keep deferring payments to subsequent years. The state also now projects tax revenue will rise by $2 billion more than anticipated for FY2021, allowing more of the FY2021 deficit to be covered without spending cuts.

The state is still sitting on $6 billion in reserves that could be used to mitigate spending cuts. Mayor de Blasio and others have urged consideration of tax increases on the wealthy. The state could increase assessments on Medicaid providers, and use the money as a way to leverage federal Medicaid dollars, another way to mitigate cutbacks. Negotiations with the Legislature on the Medicaid program and the overall budget will no doubt bring adjustments to protect the Medicaid program and protect recipients and providers.

The Health Department, DOB, the Comptroller, and the Legislature need to figure out what went wrong. The State also needs to bring more transparency to reporting on the costs of the Medicaid program, and go back several years step by step. The Comptroller may need to require a restatement of the state’s books, too, and make sure there is no repeat to the colossal mistakes by the Budget Office.