The tens of millions annual tourists who supercharged New York City’s economic growth during the past few decades looked past the low public hygiene standards in their pursuit of skyline views and Broadway shows. Public restrooms? Very few and mostly awful. Overcrowded sidewalks? We got ‘em! Millions of long-suffering visitors and residents have had to tolerate oozing garbage bags on city sidewalks, grimy subway stations, crowded playgrounds, gross bathrooms in city parks, and more. When a pizza-eating rat in your city becomes a YouTube star (over 11 million views), you might have a problem.

New York City’s grittiness should become part of its storied history. There are many reasons why the city has become the world leader in the COVID-19 outbreak (overcrowded apartments, two international airports, social inequality, and more), but it didn’t help that the city’s public hygiene standards were so low. In order to bring back the tens of millions of tourists, and retain the residents and businesses, the city needs to rethink government and private-sector neglect of basic hygiene. The subways are in some ways now cleaner than they have been in decades, thanks to dedicated frontline staff, but city (and state) leadership needs to adapt the rest of New York to make it easier to stay clean and healthy.

Luckily, there are a number of relatively low-cost, high-impact approaches (what planners today call Tactical Urbanism) that could be implemented right away to reassure residents and visitors that the city and state take these issues seriously.

I am sure that many politicians will claim that they can’t spend the money on anything but the basics, but the city’s industries will not rebound until leaders can reassure visitors and residents that they won’t get sick. Funds should even be diverted from the state budget to make the city cleaner. New York City remains the golden goose for both state and city budgets. If we lose out to lower-density areas like Texas, it is lights-out upstate and down.

Public Restroom Revolution: A New Standard of Cleanliness
The city has flirted with additional public restrooms for decades, such as fully automated systems during the Bloomberg years, but the city hasn’t added a large number of public restrooms since Robert Moses built about 650 playgrounds, most with comfort stations, in the 1930s and 1940s.

According to the New York City Comptroller’s Office, “New York City ranks a lowly 93rd in [public] bathrooms per 100,000 residents among the 100 largest American cities.” The public restrooms that do exist, most of them in city parks, are often dilapidated and unsanitary. The lack of numerous, spacious, and clean public restrooms has long been a threat to public health in New York; today, their absence could undermine the city’s recovery as a tourist destination and desirable place to live.

Adding public bathrooms in the short-term will cost money, particularly in labor to maintain them to a high standard, but adding restrooms now doesn’t have to be Second-Avenue-Subway expensive. A portable handwashing station costs about $800. Experienced companies like Callahead will gladly rent full restroom trailers, with private stalls, for city use. New York State, which should contribute to this effort, can paint them blue and add the state seal to make the experience more official.

These temporary restrooms could be deployed medium-term in cordoned-off parking spaces alongside city streets. Hundreds of them spread throughout the city’s commercial and residential areas would be a game-changer. The city regularly turns over valuable parking spaces to movie trailers for days and weeks, why not public restrooms? These restroom trailers would be staffed and maintained to high standards by attendants recruited from the growing number of people now unemployed in the city.

This “tactical urban” approach, using a short-term, low-cost tactic to demonstrate a long-term planning strategy, could deliver what the city has always needed: nice places to go to the bathroom and wash hands. Once clean and widely available temporary bathrooms are demonstrated as superior to forcing people to “hold it” or sneak into or beg for bathrooms in restaurants or cafes, these facilities can be upgraded into permanent, attractive, public restroom facilities. Bathrooms and sinks shouldn’t be ‘customers only.’

We have some great models out there for the long-term, including the super-popular bathroom at Bryant Park. I have personally waited many times to use that supremely-maintained facility. 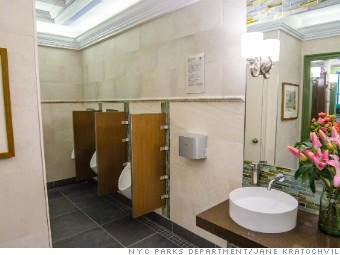 Bryant Park is so good in large part because it has such great bathroom attendants. Adding bathroom attendants in larger private bathrooms—restaurants, bars, shopping centers—would be a major upgrade, too. The city should require all private businesses with larger restrooms to provide active human attendants. Some private bathrooms are well-managed, but most are only cleaned and monitored occasionally. There is a big difference between someone standing by a sink with a towel for you and an occasional janitorial visit. We need people watching to make sure that everyone is washing their hands. Much of the world has public bathroom attendants, including Mexico, and the bathrooms they supervise tend to be cleaner. 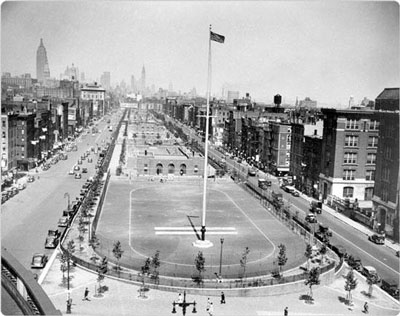 City and state leaders had to close down playgrounds to stem the spread of the virus. But in the long-term city kids, especially those in cramped apartments, need parks for their mental, physical, and emotional health. Keeping playgrounds closed, or shaming families who allow their kids to play on sidewalks or streets, is cruel. Using the police to enforce social distance in parks is not only a waste of valuable resources, but may lead to blowback from overpoliced communities.

The potential solution to safely reopening parks goes back to New York City’s rich history of playground development and recreation planning. Many decades ago city parks were better staffed than they are today, with attendants and recreation specialists who took a much stronger hand in supervising play and looking after the equipment. Budget cuts have reduced the human presence in most city parks; changing social standards also restrained their power over kids and families.

It is a good time to bring back active attendants who can 1) regulate the number of children and parents in parks 2) organize kids into safe recreation activities that integrate social distance 3) clean and wipe down the playgrounds constantly and 4) make sure the bathrooms are maintained to the highest standards. Some of the current staff are already doing this difficult work, but the New York City Parks Department will need many new staff members to meet higher standards.

Rethink NYCHA Open Space and Create Neighborhood Parks in Streets
I wrote a column last winter about the vast reservoir of open space on NYCHA grounds and the potential to create new city parks in these underutilized spaces. NYCHA developments are often up to 80 percent open space, including, in total citywide, hundreds of acres of lawns with established trees.

Start pulling down the fences and finding new uses, including seating, outdoor eating spots, work-out spaces, and more so that the city’s residents can spread out and so NYCHA residents can finally use these spaces. Revamp the tired playgrounds, add temporary restroom trailers, and put in attendants.

Longer-term amenities could also be created on underutilized sites as was done at Carver Houses in partnership with Mt. Sinai Medical Center. These NYCHA open spaces belong to the public and should be made more useful for both residents and visitors. 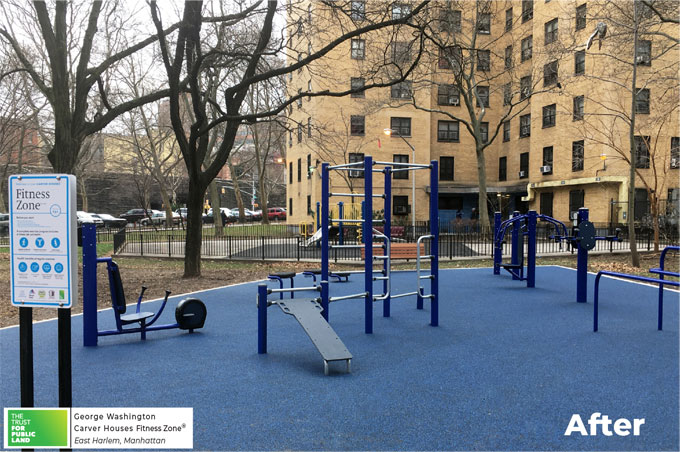 In traditional neighborhoods, smaller streets can be closed for children’s play. The city’s Play Streets program needs to be supercharged. Local parks will both reduce the population pressure on city parks and keep the virus local if kids get it. The key is to furnish the closed streets in an affordable and usable manner.

All across suburbia, for instance, parents have taken over neighborhood streets during the crisis with portable basketball hoops for their kids. These cheap additions would work just as well on city streets that have been closed for kids. The hoops are cheap and many of them could be deployed on a closed street to reduce the number of kids playing. Paint could be used to create a court. Hopscotch, four-square, and other courts can also be painted. The classic fire hydrant can be partially opened to cool kids in the hot weather. Kids can bike around safely. Closing some cross streets won’t shut down the whole city either. Maintaining these spaces will also require attendants: more jobs!

Sidewalk Widening
There is a great deal of variation in sidewalk width in New York, but we know one fact for sure: few of them meet social distance standards. We need to make sure that smaller streets in neighborhoods like the Lower East Side get a minimum amount of sidewalk space for distance. Super-popular wide sidewalks, such as Fifth Avenue, need even more space for crowds. Thankfully, there is plenty of available space for sidewalk expansion: streets.

It is good to see the City Council stepping up for street closures, but in the long-term New York City will need to find practical ways to unclog the sidewalks while allowing for regular car and truck traffic. Many countries are already pointing the way by taking space from streets to make wider sidewalks and new bike paths.

Given the continued popularity of Citi Bike and need for more pedestrian space even pre-pandemic, shifting some space from streets to sidewalks and paths seems like a good option. This is a low-cost solution that will allow for the city’s business to continue. Once everyone realizes how nice it is to have wide sidewalks, and businesses start putting out more café tables, the sidewalks could be permanently widened. 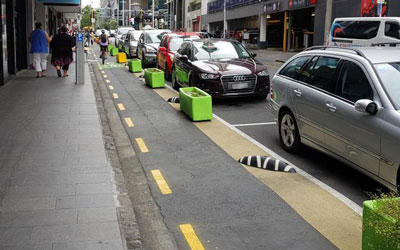 This short article is not designed as an exhaustive list. The examples here illustrate that the city could implement modest improvements, at modest cost and enormous benefit, in the short-term.

They also test out temporary interventions with long-term potential. Their implementation would put a lot of people to work on beneficial projects in a time of mounting unemployment. Ordering people to wash their hands and cover their faces is crucial, but it will take a lot of creative thinking to make New York City a healthier place to live and visit.