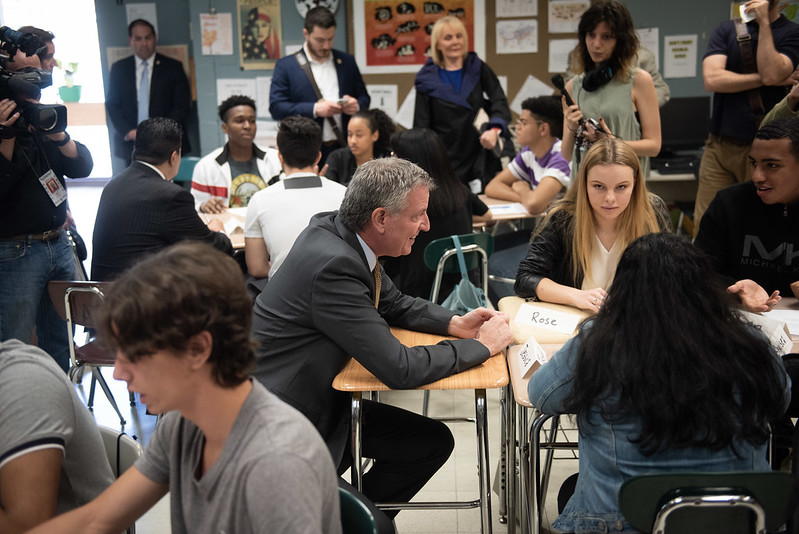 The New York City Department of Education has lost 74 employees to the novel coronavirus, including 30 teachers and 28 paraprofessionals who have died as of May 8. Evidence has also emerged that children can develop serious illnesses after being infected with the virus, and even those who are asymptomatic are often effective transmitters.

Now that both Mayor de Blasio and Governor Cuomo have wisely decided that our public schools will be closed through the end of June, it is time to start thinking about how they will be reopened in the fall to maximize the health and safety of students and staff, and strengthen the academic and emotional support that our students will need to make up for the myriad losses they have suffered this year.

As Mayor de Blasio has said, “Next school year will have to be the greatest academic school year New York City will ever have because everyone is going to be playing catch up.” And yet he has also proposed over $800 million in reductions to the Department of Education, including staffing freezes and at least $140 million taken directly out of school budgets, which would likely cause class sizes to grow even larger, the loss of school counselors and more.

How could next year be the best year ever, given such drastic reductions? In fact, our schools will need increased investments to provide the enhanced feedback and engagement that students will so desperately need after months of isolation and inadequate remote learning.

Many countries, including Denmark, Germany, and France, are gradually reopening their schools while implementing new protocols including frequent handwashing, temperature-taking, and reducing class sizes to obtain the recommended social distancing within classrooms and prevent the spread of the virus. Some are lowering class size by limiting the number of students into the school at any one time through split or staggered schedules. The American Federation of Teachers has recommended class size reduction be achieved in schools throughout our nation as well: “one of the most important measures districts can take is to reduce class sizes…Class sizes of 12-15 students will, in most circumstances, make it possible to maintain physical distancing protocols.”

Smaller classes have also been shown through research to boost learning and provide the social and emotional connections that many students will need from their teachers, given the loss in learning, isolation, and stress caused by the pandemic this year. Shouldn’t class size reduction happen here too, and if so, how?

Clearly, every available space would have to be used in our school buildings to accomplish the physical separation and smaller classes required. Split sessions would also be implemented in overcrowded schools, and more funding for additional staffing. At first glance, this would appear impossible, especially given the economic crisis the city is facing. Yet considerable savings could be obtained by cutting other, less critical areas of the education budget.

As a letter signed by 34 City Council members pointed out, the city should reduce spending on “consultants, administration, cancelled or unnecessary testing, and contract[s]” rather than cut school budgets.

Prominent among potential savings this year is a big chunk of the $1.1 billion spent annually on school busing, given that these buses haven’t operated since mid-March. Parents and advocates began a campaign against wasteful spending on unused busing, and City Comptroller Stringer sent a letter to the chancellor, pointing out that the city had no legal obligation to renew these contracts in the midst of a pandemic. Following this, the DOE postponed the vote originally scheduled for the Panel for Educational Policy on April 22 to approve $400 million for extending busing contracts through March and April. Cancelling these contracts through the end of the year could save as much as $700 million.

Considerable savings could also be achieved this year in energy, facilities, and supplies, given the fact that school buildings will be closed three-and-a-half months by the end of June, and will likely shut over the summer as well. About $570 million was allocated for energy and leases this year – with more than $175 million for energy and fuel costs alone. Surely, at least $25 million could be saved in this category.

While the Department of Education has proposed to freeze the hiring of teachers, counselors, and aides, they plan to increase spending on School Safety Agents who are hired by the police, spending a total of more than $432 million. School Safety Agents already number over 5,500, more than the number of counselors, social workers, and school psychologists combined. If the spending on these agents was merely frozen at last year’s levels, that would save at least $5.6 million right there.

There are also considerable cuts that could be made to the bureaucracy: 155 employees were added to the DOE’s central administration in 2019, and 185 more to borough offices. Large raises were awarded to administrators, leading to a 50 percent increase in the number of bureaucrats who earned more than $200,000 per year.

The mid-level bureaucracy, which includes borough offices, has more than doubled in expenditures to $351 million since de Blasio was elected. If spending on that level returned to what was spent in 2014, that alone could save another $147 million.

This fall, DOE ordered many schools to administer computerized MAP assessments, which officials testified in the future all students would be required to take several times a year. According to the comptroller’s Checkbook NYC, the cost of the contract with NWEA, the company that produces these assessments, is $5.25 million, with $1.66 million spent to date. Yet a randomized experimental study showed that the use of MAP exams was not correlated with any gains in student achievement, and many educators as well as researchers question their validity.

With more than $570 million in savings described above, we could prevent any cuts to school budgets and allocate at least $100 million to hire staff to lower class sizes, as many parents, education experts, and advocates urged at standing room only City Council hearings held in February before the pandemic hit.

Moreover, about one-third of elementary grade classes and 40 percent of middle school classes are inclusion classes, meaning that they include both general education students and students with disabilities and have two teachers per class. Strong consideration should be given to dividing these classes in half, while keeping their inclusive nature, which would allow for class sizes of 10 to 16 without any additional hiring.

New York City schools also have an average of 14 students per teacher, while average class sizes are nearly twice as large. Thousands of push-in specialists, as well as other personnel, such as literacy coaches who generally spend little actual time working directly with students, are already on staff.  Many of these instructional personnel could be re-deployed and assigned to teach their own classes, at no added expense.

If split schedules are introduced, intensive tutoring should be provided to students when they are not attending school, either at their homes, or in community centers or other locales. This could be done by enlisting thousands of volunteers from well-established organizations such as Literacy Inc., as well as recent college graduates whose salaries could be subsidized through the AmeriCorps program.

Our public schools still have not fully recovered from the last economic recession in 2007-2008, when class sizes increased sharply. This fall, there were more than 325,000 students in classes of 30 or more. The number of children in grades 1 to 3 in classes that large has risen by more than 3,000% since 2007.

Over this period, student achievement in New York City has remained stagnant or declined, as measured by the NAEPs, the most reliable national assessments. We simply cannot afford to allow them to lose any more ground. Through creative thinking and targeted savings that could be used to pay for more teachers, counselors, and tutors, and redeploying other instructional personnel already on staff,  smaller classes could be achieved next year, schools could provide the necessary social distancing, and students receive the instructional and emotional support that they will need more than ever before.