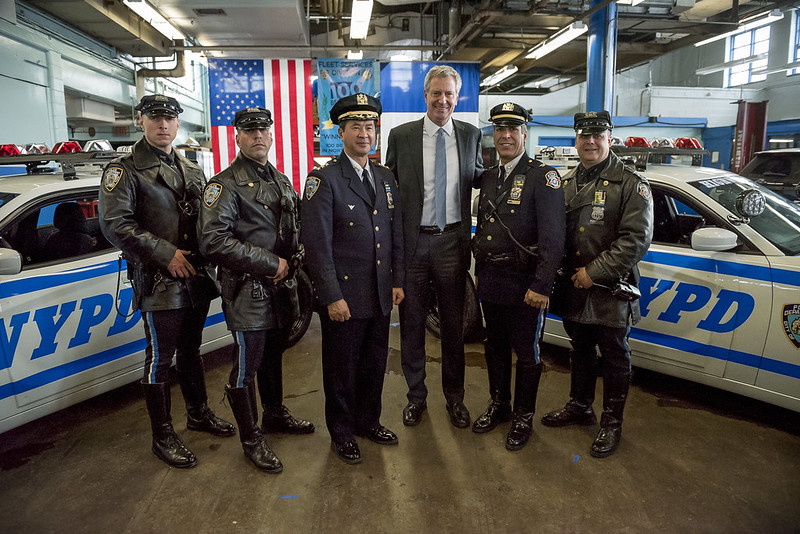 Streets and sidewalks make up a majority of New York City’s public space. Like the parks and open spaces that make up the rest of it, these spaces should serve a common good, accessible for all to travel, to play, and to protest without harm. But there is ample evidence that this is not a reality.

Consider what happened when Mayor de Blasio cracked down on social distancing last month. Nine out of ten arrested for walking, standing, or sitting too close in public space were black and Latino; so were 82 percent of those summonsed. The crackdown was an echo of stop-and-frisk, a decades-long policy of police harassing people on city sidewalks. From 2002 to 2013, black and Latino people were nine times more likely to be stopped by police even though white people were twice as likely to be found with a gun.

Or consider how the streets are policed. For example, in New York City, more than 89 percent of tickets issued last year for crossing the street midblock or against the light went to blacks and Latinos. Nationwide, black drivers are almost twice as likely to be pulled over as white drivers, and four times as likely to be searched, despite being less likely to be found with drugs, guns, or alcohol.

This shift in the dominant paradigm is more than possible. Consider one small example, found in the “Open Streets” program launched in New York City two months ago.

Weeks later, under pressure from the City Council and thousands of New Yorkers, Mayor de Blasio restarted the Open Streets program without police. In this police-free iteration, the program was wildly popular. Still, the program largely excludes neighborhoods of color, evidence of how fixing systemic racism will be more complicated than ending police enforcement.

These two versions of an Open Streets program show how antiquated and wrongheaded ideas about the necessity of police enforcement are. As advocates for communities of color and safe, equitable transportation alternatives, we believe that it is time to end NYPD enforcement of streets and sidewalks. This could do more than make public spaces fair, it could save lives.

What if the money that once went to traffic enforcement, for example, funded traffic engineering instead? Policing streets is not only a physical threat to New Yorkers of color but an ineffective way to control unsafe driving behavior. More effective is when streets, by design, “police” themselves, as the New York City Department of Transportation (DOT) has proven many times over in redesigning public spaces to reduce speeding, cycling on the sidewalk, even the behaviors that cause crashes. Unlike intermittent, selective, and biased traffic enforcement, these changes are permanent and systemic, affecting all who use the streets or sidewalk equally.

The NYPD budget is more than five times that of the DOT. That money could be redistributed to repair the harm caused by racist policing -- funding schools, social services, and redesigned streets. It is time to stop spending so much on practices that harm people of color and use that money to fund permanent systemic improvements for the common good.