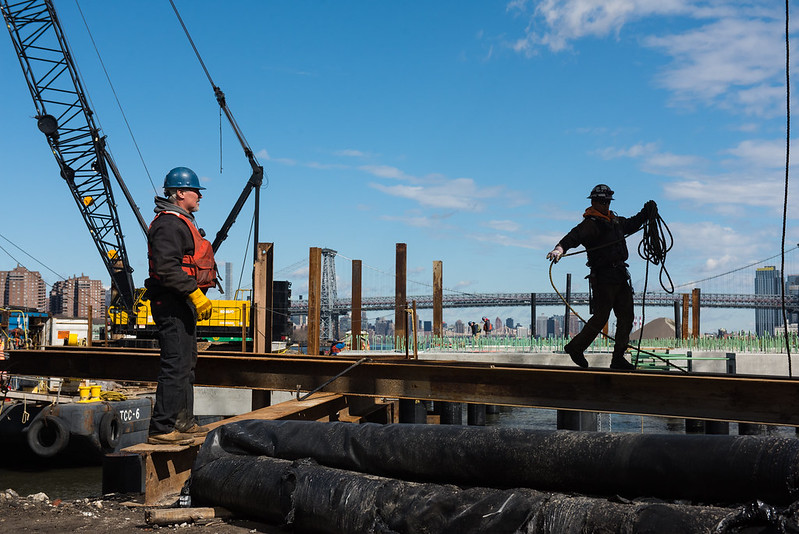 Labor statistics can be very confusing, especially for the general public.

The Bureau of Labor Statistics (BLS) just released its June 2020 report, and while it does show an uptick in employment across the nation, economic pain remains widespread. The numbers for New York City and New York State, while they lag behind the national report, show more severe difficulties. A New York Times article described the stunning local catastrophe.

Unemployment Stats - Who's In, Who's Out
Writing about the Bureau of Labor Statistics May 2020 employment report, I discussed the fact that more than 6 million persons had dropped out of the labor force between February and May 2020 and were no longer counted in the unemployment rate released that month.

Believe it or not, these labor force dropouts are not counted as unemployed.

But those who have just dropped out of the labor force are human beings, not statistics, and are part of the overall human damage of the current covid recession and labor market concerns in general.

The U.S. June Employment Report
In the just released BLS June 2020 report the updated number for those who have dropped out of the labor force since February is 4.6 million. About 1.7 million persons re-entered the labor force in June, with presumably most regaining employment. Here is the table showing the data from the BLS June employment report for the size of the labor force and the participation rate:

Overall, the BLS reported for June that payroll employment rose by 4.8 million from May and the unemployment rate dropped to 11.1% from 13.3%. It showed a partial resumption of economic activity since the pandemic-induced major job shutdown in March and April that cut 22.2 million American jobs; 2.7 million jobs had been regained in May. The table shows the labor force was 164.5 million in February 2020 and 159.9 million in June 2020.

But now, Coronavirus Surges in Parts of the U.S.
While the gain was good news, the data were collected in mid-June and since then the explosion in coronavirus cases in the South and West has led to curtailment of economic activity in some states, including the three largest states: California, Texas, and Florida, and seems likely to limit near-term recovery of the economy. And, of course, nearly 15 million of the 22 million Americans who have lost their jobs since February are still unemployed.

NYS and NYC Lost Jobs
New York State lost nearly 1.7 million jobs, and New York City about 890,000 jobs, respectively, between February and May 2020, according to data from State Labor Department releases that use the BLS reports (these data are not seasonally adjusted). These are payroll jobs, which include out-of-state residents, and represent different numbers than household employment data, which also include the self-employed. Here are the New York payroll reports: 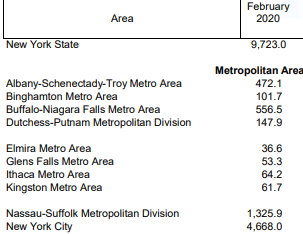 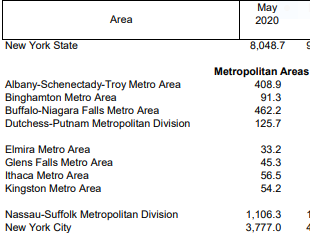 Adding Labor "Dropouts" to New York City Stats Reveals a Real Unemployment Rate That Could be as High as 25%
Bureau of Labor Statistics data show that 462,000 persons dropped out of the labor force in New York State between February and May 2020, from 9.551 million to 9.089 million. In New York City, 381,000 persons dropped out of the labor force during this period, with the force dropping from 4.051 million to 3.670 million persons. Here are the data, taken from BLS state employment situation reports:

No Matter How You Calculate It, the Pandemic's Effect on the City's Employment is Staggering
Of course the real number wouldn't be that high because some of the dropouts might have decided to retire, or no longer be seeking work for some noneconomic reason like taking care of family. But the point is that the number of New York City residents who are out of the labor force since February, related to the pandemic, is immense.

In May 2020 the number of persons who dropped out of the labor force from February at the national level was 6.3 million; in New York City, the number was 381,000, or about 6% of the total number of labor force dropouts across the country, more than double the city's share of the nation's population, which is 2.5%.

Don't Expect a Quick Recovery in the City
The next state-by-state employment situation from the Bureau of Labor Statistics will be released on July 17. At the national level, about one-third of the persons who had dropped out of the labor force through May returned to the labor force by mid-June. New York State permitted all the regions of the state except New York City to expand their economic activity to a Phase III level pursuant to state guidelines, while New York City was allowed to reach Phase II level. The BLS is likely to have recorded some of this increase in economic activity in New York and our hard-hit state may show some meaningful improvement. But it's within the context of the severe damage to the economy, and predictions of economic recovery are far in the future.