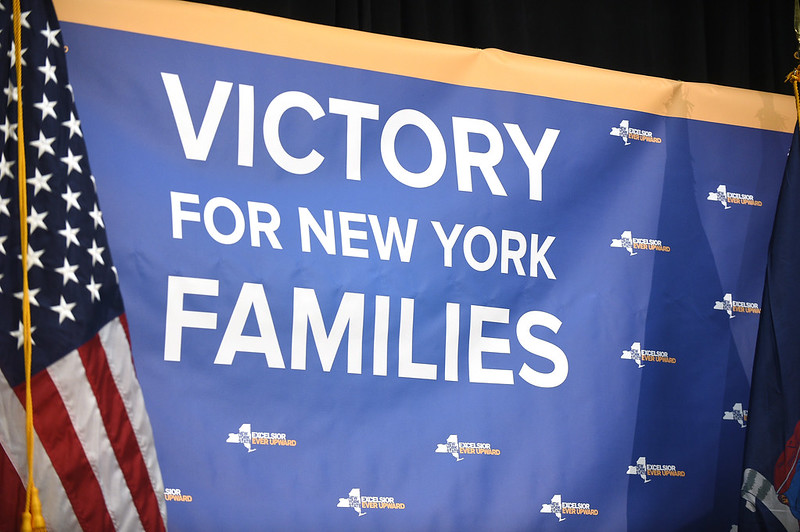 When we each ran for State Senate, the Democratic establishment supported our opponents — but the Working Families Party had our backs. That’s because for over 20 years, the WFP has stood up for working people’s champions running for the New York state Legislature and fought for true progressive power in Albany. So it’s no surprise that Governor Cuomo and the corporate Democratic establishment are now trying to take away the Working Families Party’s ballot line and weaken progressive power.

We can’t let that happen — that’s why we’re voting for Joe Biden and Kamala Harris on the Working Families Party ballot line, and you should too.

For decades, Albany was controlled by Republicans and corporate Democrats who worked hand in hand to empower themselves, rather than working people. The Working Families Party spent years campaigning to send working people’s champions to Albany — leaders like State Senator Gustavo Rivera in the Bronx, Assemblymember Yuh-Line Niou in Manhattan, and Assemblymember Diana Richardson in Brooklyn. And in a historic power shift in Albany in 2018, the WFP recruited, supported, and elected a slate of candidates who unseated the Independent Democratic Conference and their corporate allies — flipping the State Senate blue for the first time in eight years and kicking off the most progressive legislative session in New York history.

While establishment Democrats refused to endorse that slate of progressive champions — Jessica Ramos, Alessandra Biaggi, Robert Jackson, Rachel May, John Liu, Zellnor Myrie (and me, Julia Salazar) — the WFP was in the trenches. The WFP built campaign plans, recruited volunteers, and brought in the grassroots support and progressive muscle we needed to win.

Because of the Working Families Party, the State Senate was able to push through massive progressive wins in 2019 that had been bottlenecked by Republican control for years: from historic tenant protections and voter access laws to landmark climate legislation and driver’s licenses for undocumented immigrants. And that same year, the WFP invested heavily in Tiffany Cabán’s decarceral District Attorney campaign. This cycle, the WFP continued to back progressives like myself, Jabari Brisport, Marcela Mitaynes, Khaleel Anderson, and dozens more.

So it’s no surprise that Governor Cuomo and his corporate allies have been laser-focused on weakening the Working Families Party — the party that wrested control away from the Governor and his Republican allies and began to truly deliver for working people. During this year’s budget negotiations amid a pandemic, the Governor slipped in an eleventh-hour clause — requiring all political parties to meet the strictest ballot requirements in the nation to maintain their ballot line. Parties once needed 50,000 votes every four years to maintain their ballot line. Now, they need 130,000 votes or 2% of all votes — whichever is higher — at the top of the ticket and they need these votes every two years, starting now. The threshold and timing were clearly meant to hurt the WFP this year, during a presidential election with very high turnout.

It’s clearer than ever why we must work to protect the Working Families Party’s ballot line: if not for the WFP, Democrats might be still battling with Republicans for control of the statehouse. Instead, GOP legislators are dropping like flies, corporate Democrats are on the defensive, and the Left is building real power in Albany.

We will both be voting on the WFP line, because we cannot let Governor Cuomo and his fellow corporate Democrats weaken our progressive power in the middle of the political fight of our lives. New York is in the midst of a massive public health crisis, while suffering the effects of decades of austerity budgets and racist police brutality. We need to build working people’s power in Albany — and the WFP plays a key role in that fight.

Tens of thousands of our loved ones have died because of the state’s crumbling health-care system; millions are at risk of eviction; too many to count cannot afford to feed their families. Unemployment claims are climbing, and New York and Washington have left our undocumented brothers and sisters out to dry. If Governor Cuomo has his way, New York will continue cutting funding for hospitals, schools, and localities instead of asking the wealthy to pay more so we can all survive. We can’t afford a weakened Left right now. By voting for Biden and Harris as well as candidates like us on the WFP line, you can help protect the ballot line — and protect the multiracial, people-powered movement for justice that this moment demands.

***
State Senator Julia Salazar represents parts of Brooklyn in the 18th District and is running for reelection. Jabari Brisport is the Democratic and WFP nominee for Brooklyn’s 25th State Senate District. On Twitter @JuliaCarmel__ & @JabariBrisport.