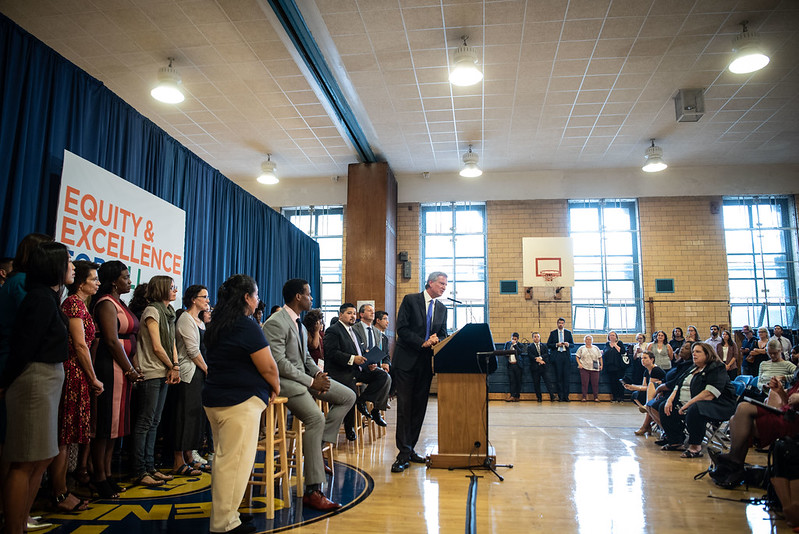 Almost six years ago, I wrote in these pages advocating the case for mayoral control based on the still-valid theory that quality education depends on maximum funding based on the Mayor's control of the city budget and the need for political accountability to drive instructional improvement. In this way, mayoral control is consistent with the system of elected school board members in districts across the country where elected officials determine the schools' budget and financing, negotiate union contracts, and appoint a Superintendent (our Chancellor). Here, all of those powers reside with the Mayor. Merging fiscal and operational control, once separate provinces of the Mayor and Board of Education, is key to efficient and effective school governance.

But strains on this system, apparent earlier, have become open wounds under Bill de Blasio. He has concentrated power in City Hall rather than delegating decision-making to the educators housed steps away at Department of Education headquarters in the Tweed Courthouse. While the Police Commissioner is allowed a high degree of professional determination over law enforcement, DOE operations under a feckless Chancellor have become an extension of City Hall, with high-level staffers lacking education backgrounds routinely assigned by the Mayor's Office to the Chancellor’s.

Education in the city has become the political pawn of a single individual, unchecked by other governmental structures. This is at least partly because the DOE is not technically a mayoral agency, subject to normal checks and balances by the City Council and Comptroller, but a quasi-independent authority subject to State Education Department regulation. The Mayor's theoretically indirect control stems from his appointment power of the Chancellor and a majority of the Board of Education, re-named by Mayor Bloomberg the Panel on Educational Policy. But de Blasio and, before him, Bloomberg, have redesigned this appointive power to assert autocracy. The City Council has no direct authority over the DOE, relegated to passing reporting requirements rather than statutory controls.

What’s to be done?

Other Models' Weaknesses
I believe there is a better way for mayoral control to work, using a strategic management approach to maintain its budgetary and accountability advantages while delegating instructional policies to educators at Tweed, in the districts, and to parents through parent associations and Community Education Councils. But this opportunity to remake mayoral control may never have been possible and likely has been permanently lost to the closely-held paradigm embedded over the last 20 years by Bloomberg and de Blasio.

The oft-proposed reform of eliminating the Panel for Educational Policy’s mayoral majority with more members with fixed terms appointed by the Borough Presidents, Council, and others is a cure likely worse than the disease. Most recently promoted by teachers' union President Michael Mulgrew, the model is much like the old seven-member Board of Education, which had five members appointed by the Borough Presidents and only two by the Mayor. That system was abandoned in 2001 in favor of mayoral control, an apt testament to its failure to produce either adequate funding or educational quality. In addition, the members' fixed terms allowed them to become independent political actors, without accountability even to their appointing officials.

Replacing an appointed board with an elected body of similar size mirrors many of these same problems through its lack of budgetary and collective bargaining independence, with the additional wild cards of one-person-one-vote seat allocation and the likelihood that our heated education culture wars would produce a volatile mix of political factions, a frequent and paralyzing phenomenon in other districts with resulting operational and educational dysfunction.

Moving further backward in the city's school governance history, community control remains a fervent wish among some, promising a degree of local self-determination never fulfilled after the teacher strikes of 1968. But the demise of community control demonstrates its impracticality. We are one city and bound educationally whether by union contracts, city funding, and most of all the need for city-wide solutions to issues of equity and diversity. Balkanizing control among our still-existing community school districts is a dream at odds with political and fiscal realities.

With these alternatives failing historical and theoretical tests, the key to improving New York City school governance may be hiding in plain sight. As education historian David Tyack pointed out in his classic analysis, there is no "one best system" to solve our educational problems. Each era produces the governance that best fits the circumstances of its time, fitting into its unique socio-political framework.

City Control
When, in 1989, the United States Supreme Court declared the old Board of Estimate unconstitutional, Borough Presidents' budgetary powers were eliminated in favor of the more representative City Council which, until then, had been a mostly vestigial body. In response, the city's elite, distrustful of the newly-empowered Council members, wrote the 1990 City Charter revision to create a strong Mayor system. We live with that system today.

But the Council now is a mature body, having secured public respect over three decades by responsibly exercising its Charter mandates. Perhaps it made sense in 2001, when mayoral control was established, to cut out the largely untested Council from a stronger role in school governance. But today, the measure of the Council has been taken and it has developed a strong reputation for educational advocacy and policy acuity, as well as a culture of consensus that might keep it from the culture wars and procedural paralysis of a less representative, non-mayoral-majority Panel for Educational Policy (PEP). The past two Council Speakers have shown respect for their limited role in education by appointing able Education Committee Chairs who, in turn, held the Mayor to close account through public hearings and greater data-based transparency.

It may be time to reward this record and improve New York City school governance by recasting mayoral control as city control, aligning educational governance with other city services. There are important advantages to this concept, perhaps most importantly to give a powerful voice to individual community interests now lacking in the Mayor's hegemony over the Department of Education or through a slightly enlarged PEP. This check on mayoral power might be the missing ingredient in attenuating executive political interests not by watering them down, as with the Mulgrew plan, but on the constitutional model, balancing executive power with legislative constraints.

The State Education Law establishing mayoral control is already largely consistent with replacing the ineffectual PEP with an independent City Council acting as the Board of Education. Section 2590-g, "Powers and Duties of the City Board," clearly states that "except as otherwise provided by law, the board shall exercise no executive power and perform no executive or administrative functions." Thus, the Council stays in its policy lane, leaving executive functions to the Chancellor and the rest of the DOE in line with separation of powers principles.

Some tweaks and more substantive revisions will of course be needed. For example, the City, not the Council, should be the employer of record for DOE personnel under Education Law § 2590-g (2). As I have suggested elsewhere, the Council should be able to hold hearings before rendering advice and consent over mayoral nominees for Chancellor after a more transparent search process. But how wonderful to put the Education Committee in charge of vetting DOE proposals for "standards, policies, and objectives proposed by the chancellor directly related to educational achievement and student performance"; "regulations proposed by the chancellor"; and "all school closures or significant changes in school utilization," including charter school co-locations under Education Law § 2590-g (1)(a, c, h, respectively). These, as well as other oversight functions, are deserving of greater public scrutiny than possible under unilateral mayoral control.

Advantages and Dangers of 'City Control'
This shared governance largely maintains the related education funding and accountability advantages of mayoral control. Voters would now hold local City Council members responsible, in addition to the Mayor, for fully funding schools. The Mayor could no more pawn off responsibility for education than he or she might try to disown police, fire, or other city agencies subject to similar Council powers. At the same time, with a Chancellor and major policies requiring Council approval, that body could no longer serve as mere gadfly but would have to take ownership of the success or failure of our public schools. By its approving the Chancellor's appointment, Council members would have skin in the game when questioning educational policies, perhaps leading to less adversarial hearings of less heat, more light.

This is not to say that there aren’t substantial dangers in this as yet-untried arrangement, which would be unique in the nation. The Council can be an ungainly body and its new education responsibilities would require a degree of discipline and timeliness not ordinarily found in large deliberative bodies. Particular burdens would fall on the Education Committee Chair to hold numerous hearings and filter reasoned recommendations to the full Council for approval. Grandstanding is a given and the chance of the Council being captured by dominant political interests is also present, though probably not any greater than is currently the case under mayoral control. Most important, the agility of mayoral control to deliver system change could be stymied by ungainly shared decision-making.

Day-to-day operation of the Department of Education would see little change under this arrangement. After all, the current PEP meets only once per month and while its meetings are long on procedure, there are usually few matters of substance, however important. It will take time for the DOE, the Mayor, and the Council to negotiate such new terrain, balancing oversight against micromanagement, promoting educational quality over political expediency.

After 20 years of mayoral control, a fair test of its advantages and disadvantages can be declared though never finalized. There can be no doubt the current system has staunched the school system's previous unaccountable complacency and its pernicious reciprocal weakness, chronic mayoral underfunding. But severe problems of unilateral control and increased politicization haunt today's education policy-making.

Whether more political involvement will improve the situation is an open question. Traditionally, though, the American way of solving this conundrum is checks and balances between elected executive and legislative branches. No governance structure is determinative of sound education policy, but it may be time to adopt this solution by including the City Council's broad representation of popular interests in schools decision-making.