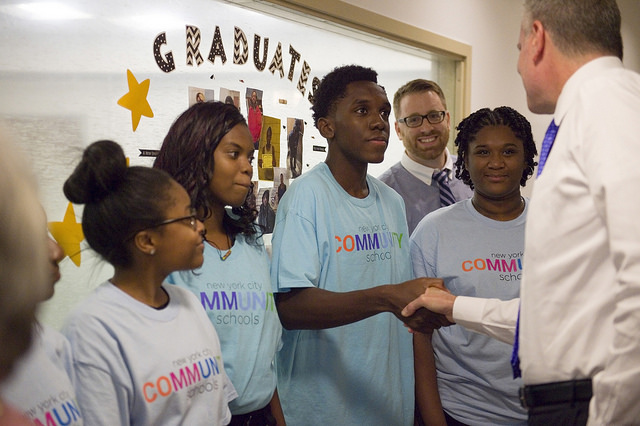 In April 2015, the New York City Department of Education modified its discipline code and added an extra step to the process for suspending students from school. Principals are now required to receive authorization from the DOE before suspending students in grades K through 2 for any behavior or any student of any age for incidents involving insubordination, such as cursing at a teacher or refusing to leave a classroom. The change was made in an effort to move away from overusing suspensions and toward alternative disciplinary measures that address the root causes of disruptive behavior.

In its first year of implementation, the change in suspension policy and the overall culture shift related to school discipline that the de Blasio administration has sought have yielded a dramatic decrease in student suspensions. The shift has been praised widely, but has also been met with resistance as some say schools are under-resourced to work with students who need to be out of the classroom and others say the policy is leading to a deterioration of school climate.

When a school seeks a ‘superintendent’s suspension,’ which can range from six days to one year, an electronic request with a description of the incident is sent to the borough directors of suspension at the DOE, who vote on authorization. An affirmative vote will send the case to the hearing office and begin the suspension process. With the policy change, ‘principal suspensions,’ which range from one to five days, for younger students and cases of minor infractions will follow the same procedure. After the vote, a conversation with the principal is initiated to discuss potential alternative disciplinary measures.

“Suspension alone doesn’t change a child’s behavior,” Lois Herrera, CEO of Youth Safety and Development, told Gotham Gazette. “But, for example, restorative practices where the student has to take ownership of the behavior, explain the harm or understand the harm that is caused, and then come up with a solution for repairing the harm is so much more powerful in terms of changing behavior.”

What Herrera is explaining is the move toward the “restorative justice” model of school discipline, where students are guided in repairing relationships and investigating the causes of their actions. The process has been panned by some, but the de Blasio administration and the City Council have both committed to it for New York City schools.

In the first half of the school year, the number of suspensions decreased by almost 32 percent compared to the first half of last school year, according to a report from the DOE. While many saw this as a mark of success, criticisms of the new suspension policy also began to pick up steam. Representatives from both charter school advocacy groups and the teachers’ union expressed concerns, claiming the new policy interferes with discipline and jeopardizes student safety.

The DOE does not oversee disciplinary practices at charter schools. Some charter schools, especially the Success Academy network, have come under scrutiny for their “zero tolerance” discipline code and high suspension rates. Education reform groups like Families for Excellent Schools and StudentsFirstNY, erstwhile de Blasio critics, have become especially vocal in criticizing the de Blasio administration’s discipline policy. A group led by Families for Excellent Schools even filed a class action lawsuit against the DOE for its “refusal to take action to keep children safe.”

A typical de Blasio ally, the United Federation of Teachers, has seen its president say the DOE has not provided adequate support for schools to begin using alternative discipline.

The DOE has received $47 million from the city to fund restorative justice programs and mental health supports in schools throughout the city during the next academic year. According to DOE officials, the funding will be used for staff training in social-emotional learning, youth suicide prevention, and therapeutic crisis intervention. It will also allow the DOE to hire more social workers, on-site mental health consultants, and counselors.

Staff trained in restorative disciplinary practices will learn to conduct restorative circles, which engage students in repairing and developing relationships, and restorative conferences, which hold a student accountable for his or her actions and the resulting harm and also provides an opportunity to repair the harm.

“It isn’t just about taking away something,” said Herrera. “It’s about also providing support and a new way of thinking. It’s a little bit of a mindshift, and in a system as large as the DOE a mindshift can take a number of years.”

After years of advocacy by some, the changes began last November when Mayor Bill de Blasio announced a plan to reduce the use of punitive school discipline and lower school crime rates.

“Parents in all neighborhoods across New York City deserve to the peace of mind to know that their children are empowered to learn and succeed in a safe, inclusive environment,” Mayor de Blasio said in a press release. “This roadmap will ensure that schools across the city bring families, educators, safety professionals, and community leaders together to support one of New York City's most prized resources – our students."

The release also stated that harsh discipline policies disproportionately affected students of color and students with disabilities. Last October, Chalkbeat NY reported that black students received about 52 percent of the previous year’s suspensions, even though they represent 28 percent of students. Students with disabilities - 18 percent of the student population - received 38 percent of the suspensions. Zakiyah Ansari, advocacy director at Alliance for Quality Education, a teachers union-backed group, believes that suspensions for childish behavior, such as writing on a desk or yelling, drive this racial disparity.

“The disparities are clear. The racial lines are very clear, not only in New York but across the country, of what children are being suspended,” Ansari said in a phone interview. “It’s important to remember that the DOE hasn’t eliminated suspensions as an option for schools, but that it created another level of authorization for suspensions for minor infractions.”

With this added authorization, Ansari hopes that school officials will continue to have in-depth conversations about what supports students need and that students will learn better conflict resolution skills.

Relying on disciplinary measures other than suspension can also benefit students’ futures, research has shown. When de Blasio created a Mayoral Leadership Team on School Climate and Discipline last year, researchers studied the negative effects of suspensions and repeated behavioral referrals. According to NYU Professor Eddie Fergus, who served as the co-chair of the team’s data and research group, suspensions result in loss of educational time, attendance issues, and a higher likelihood of involvement with the criminal justice system.

A majority of education advocates, academics, and other experts agree that students should not be suspended from school for things like talking back to a teacher or engaging in a verbal argument with a classmate. All agree, though, that schools must have the proper resources to work with students in conflict. If there has been a choppy first phase of the new DOE discipline policy, it has been around those resources. The ratio of students to guidance counselors in city schools has been the subject of controversy recently, and the de Blasio administration has increased funding for more counselors.

There are also always those resistant to change, some point out.

Advocates for Children began the School Justice Project to address the root causes of suspension and help keep students out of the criminal justice system. The project also helps students in juvenile detention or those returning from detention stay on track to reach their academic goals.

“When students are suspended, it increases their likelihood of not graduating from high school, it increases their likelihood of being involved in the juvenile justice system,” said Paulina Davis, supervising attorney of AFC’s School Justice Project. “There are high stakes outcomes on the line every time a student is suspended. So it’s really a process that we need to be very thoughtful about.”