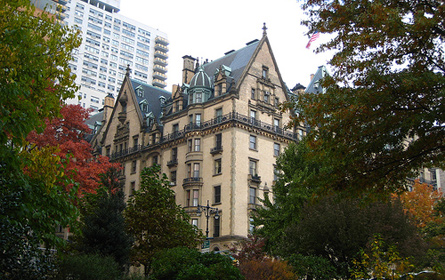 Photo (cc) 2010 Shellysblogger
Some of New York's most prominent buildings, such as the Dakota on Central Park West, burn highly polluting heating oil.

Particulate pollution is a one-stop shop for many health impacts. Studies show that it is linked with increased asthma emergencies, bronchitis, lower birth weights, heart disease and tens of thousands of premature deaths every year across the nation. And, it poses a particular threat to children, the elderly and anybody with heart or lung ailments. Millions of New Yorkers live in communities with some of the highest asthma levels in the nation.

Unlike many other regions, in New York, heating oil from buildings is one of the largest sources of local soot pollution. And most of this heating-related soot pollution comes from the roughly 1 percent of the buildings that still use residual fuel oil, alternatively known as No. 4 or No. 6 oil. These grades of heating oil typically contain about 175 times as much sulfur as the diesel fuel used in the city's trucks and buses, along with metals like nickel that worsen heart disease and other ailments.

Heating oil contributes 14 percent of all local particulate soot -- more than all of the city’s cars, trucks and buses, according to The Bottom of the Barrel, the Environmental Defense Fund's December 2009 report about the heating oil problem in New York City. The report found that the roughly 9,000 buildings that still burn residual fuel oil contribute 86 percent of the city's heating oil-related soot pollution and are major contributors to airborne nickel levels that are nine times higher than the average levels of other U.S. cities.

Unlike the diesel pollution that plagues low-income communities and communities of color that house bus depots, marine terminals, and busy truck corridors, the heating oil problem is not confined to the city's poorest communities. The plume of black smoke from some of the city’s most recognizable addresses, including the Dakota and the San Remo on Central Park West, is a telltale sign of No. 6 being burned in the basement.

Luckily, heating oil pollution is a solvable problem. In his State of the City address in January, Mayor Michael Bloomberg signaled that solving it would be a top priority for the year. Ever since, the city, environmental stakeholders and heating oil industry leaders have been working to design a plan. Any comprehensive solution will require Albany and City Hall steps.

While some aspects still must be worked out, the broad outlines of the solution are clear.

Putting this sulfur cap on No. 2 heating oil would eliminate more than 1,000 tons of particulate soot pollution each year and would be comparable to shutting down two and a half coal plants in New York state. The Assembly has passed a version of a bill to do this, but the Senate has refused to move forward on a similar bill, proposed by Sen. Bill Perkins, which would require that cap go into effect in 2012.

Industry groups are split on the bill -- the Oil Heat Association of New York and the Empire State Petroleum Association, for example, strongly support the cleanup of this fuel. With cleaner, cheaper natural gas acquiring an increased share of the heating market, the oil industry needs a cleaner form of heating oil to keep its environmentally aware customers. On the other hand, the New York State Business Council opposes the measure, claiming that it will raise heating oil prices in the middle of a recession.

Proponents of the bill argue that cleaner heating oil would save money in the long run. In fact, the heating oil industry calculates that ultra-low sulfur heating oil would save consumers up to 6 percent on their heating bills, thanks to increased boiler efficiency, reduced maintenance needs and reduced fuel use. These savings more than offset any price increase from switching to the cleaner fuel. (During 2008 and 2009, ultra-low sulfur diesel cost an average of 1.74 percent more than No. 2 heating oil in New York state.)

For example, the Department of Environmental Protection could adopt regulations that eliminate the use of No. 6 oil altogether. This would eliminate more than 500 tons of particulate soot in the city in the first year, as buildings with older burners switched to the No. 4 oil and more than 800 tons if the Perkins bill becomes law. Such a step could be accomplished quickly because it would not require any major capital investments, although buildings would have to do some extra maintenance to get ready, such as testing their burners to ensure that they wouldn’t leak when they switch to a lighter grade of oil.

Taking this step would buy time to finish a citywide conversion to dual-fuel burners that can use either natural gas or No. 2 oil. This conversion is critical to the long-term resolution of the heating oil pollution problem and to putting the city's buildings on an environmentally sustainable path for heating.

The conversion to dual-fuel systems that burn either No. 2 oil or natural gas is likely to be the trickiest component of any comprehensive city plan to solve the heating oil problem. Today’s existing equipment can last for decades so many building owners have been reluctant to replace boilers and burners that still work.

As the city and state move toward finalizing their plans to clean up the pollution from heating oil, a number of issues will need to be resolved. These include questions about the timetable for the phase-in of dual-fuel systems and phase-out of older equipment, whether buildings that already have dual-fuel systems will be able to use No. 4 oil as a backup fuel, and what incentives the city and state should offer to help buildings convert their equipment and fuels. Policy makers will also have to determine how to monitor and enforce a program that covers all of the roughly 800,000 buildings in the city.

The bottom line is that heating oil pollution poses a serious problem in New York City, but the outlines of a long-term solution are becoming clear. With the right steps in Albany and City Hall, the plume of black smoke rising from many of the city’s largest buildings, within a few years, could become a thing of the past.