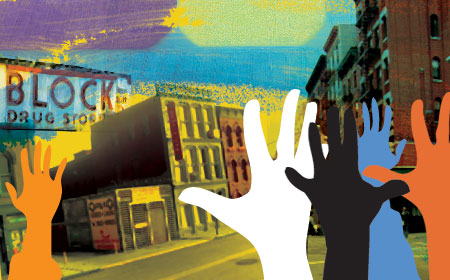 We New Yorkers have dueling psyches. We're worried about the state of the economy, but we are also hopeful about the future and excited about the role of government and citizens in making things better. We know that we are in for lean times. But we also believe that some things are too precious to lose.

Clearly the mayor has to cut the budget somewhere. But there are three reasons why, despite the fiscal constraints, we need to maintain community board funding at its current level.

First, the 59 community boards are the people's most direct line to city government, the most effective way to participate in discussions about public policy and quality of life issues -- the closest thing to direct democracy that we have in the city. The public's participation in government is becoming increasingly circumscribed, as important decisions on questions like extending term limits for city officials and appointing replacements for U.S. senators are made essentially behind closed doors, by small groups of officials. This makes it all the more essential to preserve New Yorkers' ability to have their say.

Second, the community boards deal with grassroots issues that directly affect the city's disparate neighborhoods. These include questions as varied as affordable housing, school overcrowding, real estate development, noise, sidewalk cafes and liquor licenses. Often, citizens themselves raise these matters and are intimately involved in shaping the recommendations the boards eventually make. In the recent discussions between Fordham University and the city over Fordham's proposed expansion near Lincoln Center, for example, my community board -- Community Board 7 in Manhattan -- was instrumental in addressing citizens' very real concerns about density, parking garages, open space, design approval and the like. We served as a link between the residents and the city.

And last, while New York City's budget is stretched thinner than ever, community boards provide a significant "bang for their buck." Using the mayor's "business" model, the 50- member volunteer boards, each served by just a few city-paid staffers, are pretty lean structures. The average New York community board receives$220,000 a year -- less than the cost of a subway ride for every person it represents. Together spending on the boards accounts for a total of $15 million in a $60 billion budget. The mayor's proposed cuts -- which would be distributed evenly among the boards -- to an already efficient budget would cripple the boards, all but eliminating their ability to function effectively.

Roughly 70 percent of community board spending is on staff and the remainder goes to "other than personnel services" such as rent, office supplies, postage, equipment and repairs. While the community boards would try to take the cuts as carefully as possible, there is little room to maneuver.

More than likely, the cuts will have a significant impact in two areas: They would diminish the boards' ability to develop zoning and infrastructure plans, and to analyze and conduct public review of development proposals. They also would reduce the boards' ability to communicate with and involve residents, businesses and institutions.

The impact of the cuts to community board budgets are further compounded by di minimus historical increases compared to citywide spending. On average, the rate of annual growth for all city agencies is over twice that of the increases to community boards. According to the Independent Budget Office, since 1980 city spending on community boards decreased over time from .04 percent to .03 percent of total annual city funds.

When the mayor says that the 2010 budget imposes the same budget decrease on all city agencies, it does not take into account the fact that, unlike the other agencies, community boards have received no meaningful increases in their budgets since 1980 making it impossible for them to build up a cushion or keep up with rising costs. In fact, with the historic rising cost of supplies and rent, the community boards have already had to significantly trim their budgets every year.

We are at a delicate juncture when the urgent need for savings can sometimes result in too-hasty decisions. President Barack Obama has brought with him a renewed interest in participatory democracy and a desire for transparency in government. People are more motivated to make a difference in their communities, and New Yorkers need their community boards more than ever. Bloomberg must maintain the current funding level for community boards. It's economical and it's good government. What more can we ask for?

Helen Rosenthal is serving her second term as chair of Community Board 7 on Manhattan's Upper West Side. She has been a member of the Board for nearly a decade. Previously, she worked as an assistant director in the Office of Management and Budget during the Koch, Dinkins and Giuliani administrations where she oversaw the budgets of the city's health care agencies. Until the city passed the term limit extension bill, she was a candidate for New York City Council.