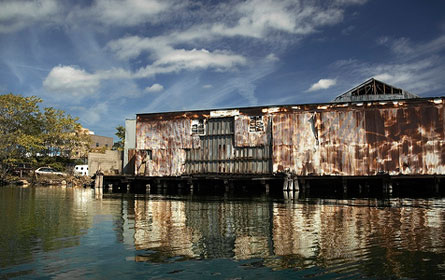 
After almost 150 years of industrial use and decades of raw sewage discharges from New York City's combined sewer system, the Gowanus Canal has become one of the nation's most contaminated bodies of water. The putrid sediments at the bottom of the canal contain PCBs, heavy metals, pesticides, volatile organic compounds, sewage solids and coal tar wastes. Adding to this toxic legacy, the manufactured gas plants, cement factories, oil refineries, tanneries, chemical plants and other industries that have called the canal home also have left behind underground plumes of pollution and contaminated the land and the groundwater, which continues to leach toxins into the canal.

On April 8, 2009, the federal Environmental Protection Agency announced a proposal to include the Gowanus Canal in the federal Superfund Program, which cleans up hazardous sites. This followed a request from the New York State Department of Environmental Conservation, which acknowledged that cleaning up the Gowanus would be too complicated for the state to handle. Soon after the Environmental Protection Agency's announcement, Mayor Michael Bloomberg announced his opposition to the agency's proposal, saying the city could handle the job.

(For an opposing viewpoint on cleanup of the Gowanus Canal, see On the Gowanus, Say 'No' to Superfund.)

The federal Superfund program was created in 1980 in response to public outrage over the threat that toxic waste sites such as Love Canal and Valley of the Drums posed to human health and the environment. Superfund provides the EPA with authority to respond to releases of hazardous substances that may endanger public health or the environment and to clean up many of the country's most contaminated sites.

About 70 percent of site cleanups are paid for by parties thought to be responsible for the pollution. EPA has power under Superfund to force the responsible parties to clean up a site or risk penalties, including having to pay EPA three times the cost of any remediation financed by the trust. However, if the responsible party cannot be found or has gone bankrupt, the Superfund trust can pay for the remediation of highly contaminated sites. Once a site is listed on a National Priorities List, the EPA can use money from the fund to fully investigate the extent of contamination, perform a remediation feasibility study and work on the site. Unfortunately, the Superfund trust is no longer funded by taxes on polluting industries and now relies on $1.2 billion in yearly congressional funding.

After decades of environmental abuse, the Gowanus Canal is poised to leave behind its history as the "lavender lake," so called because of the color industrial waste tinged its waters, and be redeveloped into a community offering, housing, retail and recreational opportunities. With input from many active community organizations, the current redevelopment proposals envision neighborhoods focused on a clean canal with parks, a public promenade, and increased access to and use of the water.

With this future as a backdrop, the Gowanus Canal must be cleaned up in a comprehensive and thorough manner. Various individual plans address some of the environmental problems in the canal and surrounding area, but none of these proposals deals with the contamination in the canal itself or seeks a comprehensive solution to the continued leaching of pollutants from contaminated sites into the canal.

Several sites in the area are in the process of being cleaned up under state Department of Environmental Conservation supervision, including the future Whole Foods site at Third Street and Third Avenue, the Toll Brothers site on Bond Street, and the Public Place site at Fifth and Smith streets. The city also has plans to reduce the volume of combined sewer overflows that enter the canal and to rehabilitate the flushing tunnel that pushes cleaner water into the canal from New York Harbor.

If the Gowanus Canal is listed on Superfund's National Priority List, these projects will continue under state supervision as planned. However, the EPA has stated that the most important task of any cleanup would be to stop the upland leaching of pollution into the canal. In addition, according to the agency, existing clean-up projects must be coordinated with the remediation plan for the canal. This coordination may delay some development projects.

The ultimate goal must be a comprehensive and thorough cleanup of the canal, rather than a piecemeal approach by state and city agencies with different priorities. While not a perfect solution, a Superfund designation will provide the best chance for a thorough cleanup of the canal, so that this unique waterway can serve as the centerpiece of a revitalized neighborhood where residents can enjoy the canal itself and the surrounding land, free of concerns over the public health threat of any toxic pollutants lurking beneath the surface.

The Lowe's Home Improvement store on Second Avenue serves as an example of the dangers associated with cleaning up contaminated land without comprehensive planning. The Lowe's was built on the site of a former manufactured gas plant and was remediated under the State Brownfields Program. Although Lowe's conducted a cleanup prior to starting construction, published reports state that Lowe's did not address the entire site and that coal tar contamination has now migrated toward the supermarket next door. Without a comprehensive cleanup plan for the canal there is a danger that other sites will not be adequately remediated, leading to the continued pollution of land, groundwater and the canal.

When Bloomberg announced his opposition to listing the canal as a Superfund site, he indicated that the city would come up with an alternative plan that would achieve virtually the same goal, but without the perceived stigma that "Superfund" carries. The administration has not released final details but promises that its alternative will be supervised by the EPA, will study the canal's contamination to the same extent that Superfund would and will achieve a cleanup to the same standards. The city has also proposed having the parties responsible for the contamination pay for a portion of the cleanup and is seeking funding for dredging of the canal from the U.S. Army Corps of Engineers.

With a price tag for the cleanup that could reach $300 million to $400 million, it remains uncertain whether responsible parties would pick up part of the costs and whether money from the Army Corps would provide sufficient funding. Any cleanup that does not list the canal on the National Priority List would not allow the EPA or anyone else to use money from the Superfund trust to study the extent of contamination, pay for cleanup if necessary or compel the original polluters to do the cleanup themselves.

Although the city has provided few specifics about its proposal, any alternative to Superfund would lose the tools and funding of the Superfund program, while gaining few if any advantages. This is why Superfund presents the best mechanism for retiring the Gowanus Canal's "lavender lake" stigma once and for all.

Joshua S. Verleun is a staff attorney at Riverkeeper, Inc.