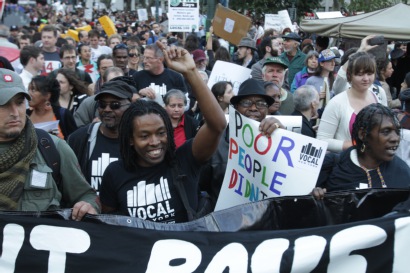 New York City is simply not working for a large percentage of the population. In Manhattan, the top 20 percent of families earn forty times more than the bottom 20 percent of families. The city’s homeless shelter population continues to grow and includes an unacceptable 20,000 children a night.  Poor Black and Latino children are disproportionately likely to attend the most troubled schools with the fewest resources. People on the margins struggle with a fraying social service safety net, and immigrants, homeless people and Black and Latino youth face harsh crackdowns on their basic rights.

The aftermath of Superstorm Sandy brought this reality into stark relief. Firms around Wall Street were up and running in a matter of hours. But just blocks away in Chinatown and the Lower East Side, people had no information or basic essentials for days. And in places like the Rockaways, Coney Island and Midland Beach on Staten Island, residents are still fighting for a return to normalcy. In these and other neighborhoods, local organizations are now coordinating an advocacy campaign to demand proper recovery plans.

To address inequities like these, North Star Fund is launching a $7 million Activism’s Future campaign. Our goal is to build a robust movement to close the chasm between New York City’s richest and poorest citizens. Through Activism’s Future, we are strategically partnering with grassroots activists in communities most affected by injustice. By growing our commitment to these groups, North Star Fund will strengthen the capacity of activist organizations and coalitions, and will fund victories that greatly improve lives in our city. In the process we will put forth a new model of progressive activism for our nation.

Grassroots activists directly affected by injustice are our best hope for creating real change. They know firsthand which policies aren’t working and which programs must be expanded. And with head, heart and bullhorn, they are taking on City Hall every day. Effective grassroots organizers often wield enormous influence in relation to their size and budget.

To expand grassroots leadership and secure activism’s future, North Star Fund will double its funding to activists so that they can use tools of organizing like public demonstrations, coalition building, and meetings with legislators to stand up for their rights. North Star will also expand the training of local leaders to organize their communities and build alliances to broaden their reach, and increase media coverage of social justice issues.

As a great city, we need to keep issues of equality, economic justice and peace on the front page and in the front of peoples’ minds. Finally, North Star Fund will broaden the community of donors who support activism in order to build a bigger and stronger social justice community.

Activism’s Future we will make New York City a place we can all be proud to call home. And it will safeguard one of our most valuable assets, our community of activists.

Hugh Hogan is the executive director of the North Star Fund which, since 1979, has awarded approximately $41 million to over 1,750 community groups — from kitchen table activists fighting for better housing to citywide movements to protect civil rights. Images courtesy of the North Star Fund.