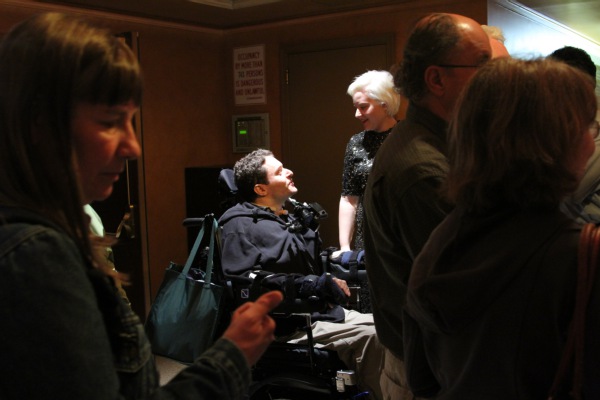 There seems to be no greater punishment than paralysis.

It’s easy, lazy even, for me to say -- so many people struggle with horrific illnesses and severe physical challenges. It’s impossible to rank one over the next. But people with spinal cord injuries, and their families, experience a unique, constant anguish.

My brother Jeff, then 17, had always been the type to self soothe teenage hormonal episodes with sports — lacrosse, basketball, snow boarding, you name it.

It was with his typical confident skill that he effortlessly dove into the shallow end of a swimming pool. I don’t need to close my eyes to remember what it looked like -- a clean move, one he’d made so many times before.

One simple dive, and our world collapsed. Drowning. My parents’ screams as they jumped into the pool fully clothed. The shock of witnessing a grown boy lifeless and blue, cradled in my mom and dad’s arms.

In an exceedingly cruel twist of fate, athletic Jeff fractured his neck, injured the C1-C2 vertebrae in his spinal column, and at 17 became a high level quadriplegic.

To think about that day is to forget how to breathe, and each flash brings with it an almost unimaginable anguish.

Jeff has battled to adapt to his new life in the years since — navigating a wheelchair, operating a phrenic nerve pacemaker — and the daunting social isolation that comes from being dependent on 24/7 care.

As his sister, and not his primary caregiver, it is agonizing to see his spirits diminish and not know how to respond. As the years go by, his body and soul continues to atrophy. The boy that ran to the field as I would the stage is now imprisoned in his body, a shell of what could have been.

I spent the night of his accident an anxious, bewildered 14-year old, pacing the bedroom of a family friend, realizing there was a great chance Jeff would die, and nothing I could do would save him.

And yet, he survived. Nearly 15 years later, he is alive. And what remains is an extraordinarily intelligent, well spoken, man. A man with life I once thought was lost forever.

To consider his medical situation “lucky” is to have a measure of grace I do not comprehend. And yet, his story is not over. There are scientists and medical researchers in my state, New York, devoted to the hope that one day Jeff will be reborn again. That there will be a cure for paralysis -- that perhaps a family, years from now, will have treatment options that have yet been discovered.

The New York Spinal Cord Injury Research Program has raised over $70 million for spinal cord research since 1998. This money was raised through moving violation penalties that were put aside into a state fund specifically geared toward spinal cord research grants. And yet, due to political maneuvering beyond my comprehension, New York Governor Andrew Cuomo followed former Governor David Paterson in rerouting these necessary research funds into the state’s general fund. The money is available, but the leadership needed to maintain this financial commitment to paralysis research is gone.

Cuomo’s office said there are no plans to restore this vital funding to spinal cord research. This is absolutely unacceptable, and insulting. As a result of his inaction, potential cures have stalled without the necessary funding needed for scientific growth. Governor Cuomo, this funding must be restored for the 2013-2014 budget.

Take a stand. So that Jeff, one day, can join me.

Sarah Galli is the Founder & Executive Producer of Born for Broadway, whose mission is to engage college campuses in raising funds for paralysis related organizations through performance, with an annual Broadway gala showcasing the performances of both established Broadway performers as well as up and coming talent. She also co-chairs the Political Advocacy Network for WIN.NYC, dedicated to empowering young, pro choice, Democratic women. For more information, please visit www.bornforbroadway.com. Image of Jeff courtesy the author. Photo by Kenie Huber. Used by permission.