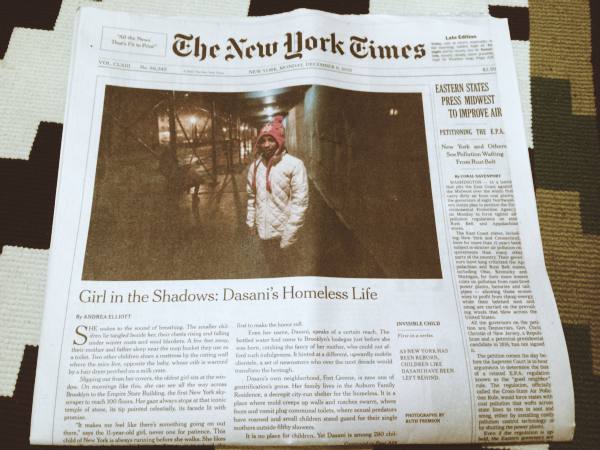 Call it the Dasani effect.

As if to remind Mayor Bill de Blasio that housing was a top priority in his election campaign, the New York Times devoted a five-part series last month to a homeless child, Dasani Coates, and her family’s travails in a miserable city shelter.

Dasani is one of 22,000 children – the most ever – living in the city’s homeless shelters. She was on the steps of City Hall on Jan. 1, a guest of the newly elected Public Advocate Tish James, as the mayor was sworn in.

The Dasani stories painted a distressing picture that is reality for thousands of children. While some apportioned blame to Dasani’s parents, it was impossible not to see how the city’s homeless prevention policies were failing the girl and her family. Former Mayor Bloomberg’s suggestion that God was to blame for the family’s plight seemed to indicate he had given up on the homeless as he was leaving office.

The stories were just one indicator – plenty of others signal that big changes in the city’s housing policies are likely in the next few months. And advocates are expressing cautious optimism at the prospects of changing policies that some say criminalized homelessness.

“I’m not holding my breath,” said William Burnett, a board member of Picture the Homeless, which has aggressively advocated on behalf of homeless people for years. “We’re hopeful but we’re not going to give de Blasio a pass.”

Housing advocates say they are optimistic that the new mayor will aggressively address the problems they see ravaging communities from Jamaica to Mott Haven, Washington Heights to Brighton Beach, Staten Island to Red Hook, Bedford Stuyvesant to Chelsea. And they are geared up to work with the new administration, they say.

“It’s sort of like there are fires all across the city and you have non-profit groups who, all they do is put out fires,” said Kenny Schaeffer, a housing attorney and member of the Met Council on Housing. “Of course the mayor will work with these organizations.”

Advocacy groups are elated that the city now has a mayor who seems to understand the housing dilemma and how housing policy can promote equity in the city, said Jackie del Valle, Director of Organizing and Advocacy at the Fifth Avenue Committee in the heart of the Brooklyn district de Blasio represented as a City Council member.

“What's exciting,” she said, “is that the new mayor will actually work with advocates, and work with coalitions. He'll listen to advocates and work with us to make changes.”

“He was elected by a progressive wing of New York City,” added Harvey Epstein, Project Director of the Community Development Project at the Urban Justice Center. “I think he’ll listen to what we have to say. I’m hopeful.”

Advocates are keen to take advantage of the moment – and not lose leverage as they did in 2001 when a “truce” was adopted with the new Bloomberg administration.

“That was a terrible strategic mistake,” Schaeffer said.

Advocates say they are keen not to repeat that mistake and hope a new era has begun in the fight against homelessness.

"Obviously everyone understands our responsibiity is to provide legal representation to address the problems of homeless New Yorkers," said Steve Banks, chief attorney for the Legal Aid Society, which has sued the city frequently during the past three decades for its treatment of the homeless. "But we're hopeful that the city will have the kinds of policies in place that can avoid the systemic problems of the past."

Burnett echoed that sentiment, adding that de Blasio must do more than talk about the homeless.

“When Obama first got into the White House, homelessness and housing policy was broadly discussed and they solicited input from the public – we participated in that process – in order to develop a plan, it was a thick book, to reduce homelessness,” he said. “We’ve been through this before where politicians ask for our input and then don’t follow through.”

Action is needed, he said. The new mayor’s assertion that the owners of vacant lots in the city should “put up or pay up” is the type of action advocates are looking for.

“I want to be hopeful,” Burnett said. “But I realize if the mayor’s going to be truly progressive on housing, we’re going to have to hold his feet to the fire.”

With homelessness at a record level, a continuing erosion of affordable housing in the city and an unprecedented affordability crisis, the new mayor has lots to do on housing, advocates say. But a few things stand out, they say.

“First, making sure the mayor follows through on pushing for home rule on the rent laws – that’s the biggest thing,” said Jaron Benjamin, executive director of the Met Council on Housing. ”And second, what he does with NYCHA (the New York City Housing Authority) and Bloomberg’s plan to build luxury towers on NYCHA properties.”

Once upon a time, the city wrote its own housing laws, but in 1971 the state stripped the city of its power to do that. Landlords subsequently gained much greater influence over the city’s housing laws – because upstate legislators, the theory goes, don’t know or care about housing issues in the city – and landlords influence them by financing their campaigns.

If de Blasio leads the charge for home rule – and wins it – the idea that a new progressive era has begun in the city and the state for that matter would be more than rhetoric.

But one source I spoke to in Albany who was not authorized to talk for attribution said the idea was a non-starter – Republicans would never go for it, she said, and Democrats do not have anything to offer in return to obtain the repeal.

The use of NYCHA property for new developments

NYCHA manages 334 housing complexes, home to nearly a half-million New Yorkers. Real estate developers would very much like to build on that land and Mayor Bloomberg supported their vision, justifying it as a way to help the perpetually cash-strapped agency. NYCHA could use the money it got from leasing or selling property to fix up apartments, proponents of the idea said.

But advocates staunchly oppose the idea, as do many NYCHA residents.

“I think it's a horrible idea,” said Benjamin. “Nobody from NYCHA could afford to move in to those developments.”

Already, the departure of John Rhea, the chairman of the NYCHA board, is a good sign, advocates said. Recent articles questioning payments by NYCHA to the New York Police Department and Department of Sanitation – which advocates say set NYCHA up for financial distress – also suggest NYCHA is set up for significant change.

“NYCHA will be an easier issue to deal with, too, because he’s not going up against the landlord or real estate lobbies,” del Valle pointed out.

There are more than 3,500 vacant buildings and almost 2,500 vacant lots across the city, according to a 2011 study by Picture the Homeless. Properly developed, the buildings could house about 70,000 people – the approximate number of homeless in the city. But more needs to be known about these buildings and lots – such as who owns them and why are they vacant?

In 2010, Council member Melissa Mark-Viverito, now the Council Speaker, introduced a law – Intro 48 – to have the city collect such information. The public advocate at the time, Bill de Blasio, supported the proposal, as does the new public advocate, Tish James. If Intro 48 cannot become a law now – with all three having ascended to the positions to make it happen – it will send a rather clear message to advocates.

The lack of affordable housing in the city remains a problem. Inclusionary zoning offers a bonus to developers who set aside a percentage of the units they build for lower- or middle-income people. But developers can decline the offer. As a candidate, de Blasio said he supports making inclusionary zoning mandatory.

“That would be a sea change for opportunities to create substantial amounts of affordable housing in the city,” Epstein said.

During the mayoral campaign, Housing First!, a broad coalition of community, business, labor and religious organizations, published recommendations for the next mayor. One suggestion: the creation of a deputy mayor position to handle housing in order to improve transparency and accountability.

Whether de Blasio creates the post or not, his appointments on housing will be critical to the pursuit of progressive housing policies: the commissioner of the city’s Department of Housing Preservation and Development, for example, could pursue code enforcement more aggressively.

“He’s hiring people,” Epstein said. “We’re wondering who he appoints as his housing commissioner – and then we’ll be able to talk about this.”

Similarly, the mayor’s appointments to the Rent Guidelines Board will send a strong signal on what will happen when it starts deliberating on rents in the coming months. And his appointment to be chair of the NYCHA board will have a similar symbolic impact at first – and practical impact as the person implements her or his vision.

As for Dasani, soon after her appearance at the mayor’s inauguration, Publisher’s Weekly reported that her story would become a book. It was unclear, however, whether she would benefit from any advance paid for the book. Furthermore, the Legal Aid Society has set up a trust fund for Dasani and other children in the “Invisible Child” series in the Times.

Dasani and her family are no longer living at the homeless shelter described in the Times story, said Banks of the Legal Aid Society. They have moved into "a more appropriate facility," he said.