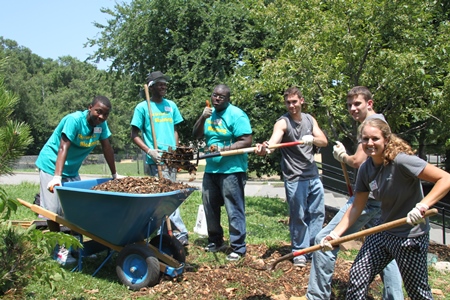 An early springtime sun was shining down on Seward Park as Mayor de Blasio introduced Mitchell Silver as New York City's next parks commissioner last month on the Lower East Side. It was an inspiring day for park advocates across the city, as both the mayor and incoming commissioner offered thoughtful, even-handed commentary centered on a clear goal: a fairer park system for all New Yorkers.

Now, with budget season upon us, we're pleased to see that the mayor's preliminary budget for parks not only baselines many of the important restorations made over the past few years, such as street-tree care and stump removal, but funds items up front that are usually subject to the annual budget dance, such as Playground Associates and seasonal workers to staff pools, among other facilities.

This good news gives the parks community the opportunity to turn its attention to the larger issue of addressing inequities across the park system – including at a city council hearing next Wednesday, April 23rd. The solution is complex and nuanced. While many of the large park conservancies are ready to work with the commissioner on bringing more private resources – financial and otherwise – to parks in need, it's clear, as council parks and recreation committee chair Mark Levine noted recently in the Huffington Post, that addressing inequities must begin with the public budget. There are several specific budget and policy reforms that the administration and its Department of Parks and Recreation (DPR) can undertake in the name of equity and fairness.

Expense budget
On the expense side, fostering greater equity will require addressing the top concern of many local park advocates across the city: there simply isn't enough full-time staff assigned to the parks that need them most. Rather, 75 percent of DPR's maintenance staff is made up of Job Training Participants (JTP) who work at DPR up to six months but are almost never given an opportunity for permanent employment once their training is complete. "Almost as soon as they're really up to speed on the park, they cycle out," a local advocate told us recently. Her comment rings true across the city.

At the same time, many advocates tell us that having full-time staff – a familiar face in the park – goes a long way toward improving the overall park experience for users. These issues offer Mayor de Blasio and Commissioner Silver an opportunity to both address park equity issues and create good entry-level jobs.

What would those jobs be, where would they make the most immediate impact, and how much money is needed to create them? A good place to start would be to create a neighborhood parks fund of $10 million, which would allow Commissioner Silver to work with the Council on a plan that really starts to address needs in underserved parks. Here are a few ways such a fund could be spent in high-need areas:

Our organization learned first-hand how important these positions are when we helped lead the Neighborhood Parks Initiative almost 10 years ago.

Not only would these new positions start making a difference for parks most in need right away, but they'd offer an opportunity for DPR's part-time workers to gain full-time employment through a new, robust training program to help transition JTP staff into full-time maintenance workers and gardeners.

Capital budget
There is also an opportunity to address park inequities through the capital budget. In recent years, the Department of Parks and Recreation has not had a meaningful discretionary budget to really enable it to plan for and fund capital projects over time across parks citywide. Rather, DPR has been reliant for funding for the majority of its projects on piecemeal discretionary allocations from city council members and borough presidents. Cobbling together allocations over multiple fiscal years from different elected officials is inefficient, leads to inequitable results, and often means the nuts-and-bolts needs of parks across the city fall through the cracks.

We are pleased to see that our call for increased discretionary capital funding, as highlighted in our Parks Platform 2013, seems to have been heard: the initial fiscal year 2015 budget contains a significant amount of capital funding for parks, and it appears to be at the discretion of Commissioner Silver. We call on the Council and administration to ensure that this funding remains in the final budget. At the same time, our recent research on improving the timeliness of capital construction shows that funding should be added to the budget for additional full-time positions in the capital division.

The introduction of Mitchell Silver, an urban planner, ushered in a new era not only for New York City's parks, but for its neighborhoods. After all, parks lie at the heart of city neighborhood life, in every corner of each borough – infrastructure as essential as housing, sewer lines and roads. The community building impact these spaces have extends far beyond their boundaries. Park issues are neighborhood issues.

As Commissioner Silver takes office, we're hopeful the administration and Council will supply him with the budgetary tools needed to really address inequity – and, in turn, lift the park system as a whole.

Tupper Thomas is the Executive Director of New Yorkers for Parks, an independent research and advocacy organization.