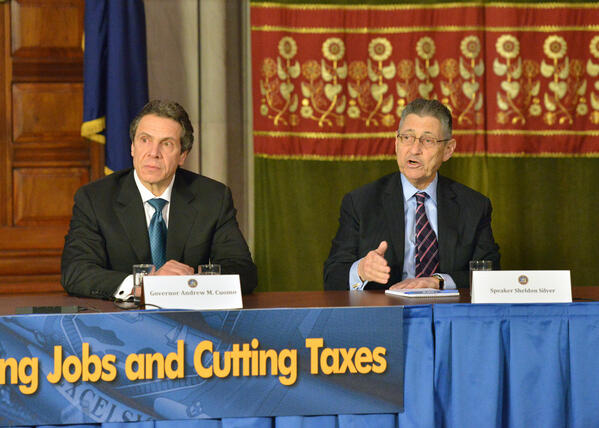 A former member of the New York State Assembly once told me off the record that the real reason Sheldon Silver didn't disclose who his law clients were was not because he was afraid of being exposed for doing their bidding in the Legislature, as Silver's critics have long alleged; Silver's real secret was that he didn't actually have any law clients whatsoever and that he was being paid millions of dollars by the firm Weitz & Luxenberg for doing no work at all. Thursday's five-count indictment of Silver by the U.S. Attorney's Office appeared to affirm that portrait of the Speaker's outside income from Weitz & Luxenberg and another firm, Goldberg & Iryami.

While Silver, an extraordinarily resilient politician, could certainly survive the charges brought again him and hang on as Assembly Speaker, his arrest will undoubtedly weaken him immensely for the rest of his career in office and have major implications for the current political and legislative landscape in Albany. The following are five immediate ramifications of Thursday's bombshell turn of events:

1) POWER SHIFT: For over a generation, Silver has been one of Albany's "three men in a room" and during the troubled administrations of Govs. Spitzer and Paterson emerged as the most powerful of the three, often appearing to be the lone responsible party keeping the ship of state from crashing into the rocks. That power dynamic shifted when Gov. Cuomo, a forceful chief executive, took office in 2010, and Silver was wounded by the series of scandals that have rocked the Assembly in recent years—most notably, the Vito Lopez sexual harassment cover-up complaints—as well as the arrest and conviction of one of Silver's closest friends and associates, Willie Rapfogel.

Still, Silver has consistently been, at least on paper, progressive Democrats' foremost champion in the Capitol. If he does remain Speaker, Silver will have a very difficult time holding the line on progressive priorities, particularly if the consistently rock-solid support of his members starts to break down. If Silver gives up his post or is forced from it, Gov. Cuomo is almost certain to try to heavily influence the succession process to ensure that the next Speaker is a pliant ally. If Cuomo prevails, he will further tip the balance of power in Albany in his favor. If the Legislature holds out for an independent Speaker, there will be enmity in the proverbial "room" which will shake up the relatively amicable working relationship Cuomo, Silver, and Senate Republican Leader Dean Skelos (and IDC head Jeff Klein) have enjoyed for the past four years.

2) POSSIBILITY OF REFORM: Silver's arrest is already prompting yet another call to address Albany's appalling epidemic of political corruption. Since the allegations against Silver stem from his outside income, the Legislature's rules governing what money senators and Assembly members can make from their other jobs and how they have to disclose it—rules good government groups have long slammed as far too lax—are certain to come up for review. A debate over whether the Legislature should become full-time to eliminate the possibility of members being entangled in any perceived or actual conflicts of interest is also likely to arise, though the Legislature would probably only sign off on this change in conjunction with a significant pay raise for legislators, which it is hard to believe could pass amid the current political atmosphere without a serious voter backlash in 2016.

Leadership term limits may also now be on the table in light of how long Silver was allegedly enriching himself via his position. Since Gov. Cuomo shuttered the Moreland Commission on Public Corruption in March as part of a deal with Skelos and Silver, he will be under significant pressure to demonstrate that he didn't let Silver almost skirt free, and to prove that he is as determined to clean up Albany as he has repeatedly professed. Silencing his critics who claim that he has been soft on—if not complicit in fostering—Albany's culture of corruption will now become one of the governor's chief concerns for the foreseeable future—and will encumber his ability to focus solely on achieving the ambitious agenda he laid out yesterday—with Silver on stage beside him—in his State of the State address.

3) HOUSING FIGHT UNCERTAINTY: Tenant advocates hoping to preserve and strengthen New York City's rent control laws and other key pieces of housing legislation that are sunsetting this year have placed a lot of their eggs in Shelly Silver's basket. Though Silver was Speaker two of the times the city's housing laws were weakened in Albany, tenant advocates widely regard him as their foremost bulwark in the Capitol, as they are suspicious of where Gov. Cuomo, who received millions of campaign dollars from the real estate industry, sides in the fight, despite his having helped them win stricter limits on the deregulation of apartments in 2011 and creating the Tenant Protection Unit, which landlords generally do not like.

If Silver remains Speaker, it will be far more difficult for him to defend the city's rent laws, and if he is ousted, it will matter significantly who takes his place. If his successor is Assembly Housing Committee Chair Keith Wright, who is always quick to point out that he lives in a rent control apartment, a change could end up potentially benefitting tenant advocates, but Wright is also a close ally of Cuomo, who appointed him co-chair of the New York State Democratic Party in 2012, and unlikely to cross the governor. In any event, an already tense situation for tenant advocates got much more stressful for them on Thursday.

4) TORT REFORM BACK ON THE TABLE: Supporters of modifying or eliminating New York State's Scaffold Law undoubtedly are rejoicing today. The law, which holds contractors and property owners 100 percent liable if a worker falls on the job, is detested by business groups and the real estate industry, which insist it dramatically drives up the cost of building, and fiercely defended by union advocates and trial attorneys, the latter of whom receive a lucrative percentage of the often large settlements that can result from lawsuits that hinge upon the statute. Since he became Speaker in 1994, there has been no more dependable and aggressive ally than Silver of the New York State Trial Lawyers Association, on whose board Weitz & Luxenberg partner Arthur Luxenberg sits.

Last year Gov. Cuomo called the trial lawyers "the single most powerful political force in Albany" in explaining to Crain's why there was no current path to reforming the Scaffold Law, and that power largely emanates from Silver. With Silver hobbled and his financial ties to law firms centrally related to his indictment, it will be much harder for the Trial Lawyers and related lobbies to rebuff any efforts at reforming the Scaffold Law and other favorite targets of tort reform advocates, like contingency fee limits and trespasser responsibility.

5) MORE SCALPS?: The reason Shelly Silver is only a year short of becoming the longest serving Speaker in Assembly history is because he has been very good at his job. The speaker's principal responsibility is to protect his members, and in that regard Silver has been exemplary, often taking the heat for bad and criminal behavior by his members when he could have easily opted instead to hang them out to dry. With Silver on the ropes, he won't be in a position to protect his members any more, and human nature being what it is, now that they are exposed to the elements some of his members may turn on each other or on him, creating a general atmosphere of paranoia, hostility and shameless opportunism.

U.S. Attorney Preet Bharara has every reason in the world to put in jail every corrupt elected official in the state, particularly after he so publicly took over the Moreland Commission's investigations, and so far he has demonstrated a dogged willingness to do so. In the past there has been an omertà in Albany, kept sacred by the leaders of the Legislature. It's hard to believe that Skelos and Silver will be able to enforce that code of silence moving forward with the same vigilance.

***
Morgan Pehme is the former editor-in-chief of City & State, and a frequent commentator on New York politics and government on television and radio.