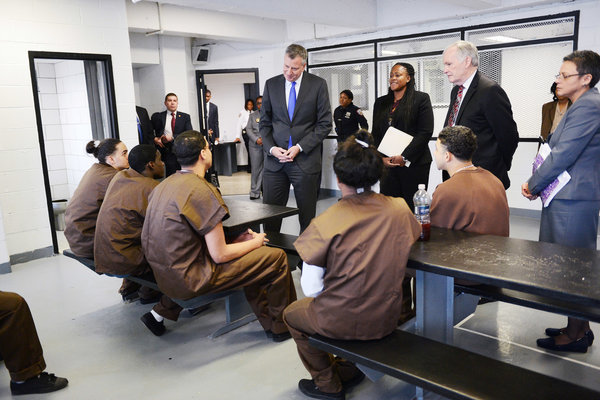 Rikers Island reached a new level of infamy last summer when a Department of Justice report detailed systemic violence and despicable mistreatment of inmates. Following that, shocking reports of abuse continued to emerge, validating a damning investigation and legal action by U.S. Attorney Preet Bharara. And now, in just the past month, we have seen both a report describing the lack of background checks during Rikers hiring practices, and news that healthcare complaints in New York's jails nearly doubled in two years.

After dropping a high-ranking Department of Correction official and appointing three new members to the watchdog Board of Correction months ago, New York City's new Correction Commissioner Joseph Ponte recently fired a captain and five guards tied to an inmate abuse case from 2012. It was also recently announced that New York would end its practice of putting adolescents under 21 in solitary confinement—a landmark decision in our jail system's troubled history.

That's all a good and necessary start down a long road. But the shake-up can't end there, To be sure, Rikers needs a transformative overhaul, but so does the oversight system that so badly failed to raise the flag on the atrocities at Rikers over the last few years. To do one without the other is to guarantee more failure.

Much attention has been focused on the deplorable acts that took place on Rikers. Equal attention, though, must be paid to understanding why the oversight system was so ineffective. Either a mayoral commission must be appointed to investigate, or, alternatively, the City Council must conduct its own exhaustive review.

While such a process is underway, quick changes should also be made within the existing oversight system.

The documented horrors were being committed at Rikers and there was nary a public word of concern from two – that's two – appointed inspectors general (IGs). In fact, the Department of Investigation (DOI), where the IGs are housed, found hundreds of incidents of previously undocumented violence, but did not make the findings public in any way that we at the Citizens Crime Commission can find, nor did it include them in a City submission to federal investigators.

The Board of Correction (BOC) – our civilian oversight body for jails – also has a responsibility to educate the public about wrongdoing at Rikers, and it could have done much more. To the BOC's credit, it did issue three condemning reports—one last year and two this year, including one just last month. The BOC even brought up the question of inmate violence at its meetings. But when there was no action from the department or City Hall, BOC should have been much more vocal and proactive.

Now, U.S. Attorney Bharara has made clear that he will move for federal oversight if a thorough overhaul at Rikers is slow to materialize. In response, the de Blasio Administration has pledged to make serious changes at the jail, and outlined a sensible plan of action. But how do we make sure those reforms are working? And that this doesn't happen again?

First, the City's Inspector General for the Department of Correction (DOC) must be more accountable and assigned new responsibilities.

The DOI commissioner is directed by law to turn over cases to an appropriate local prosecutor when IGs find potential criminal behavior, and the investigation which led to the findings was commissioned by the Mayor, the City Council, or DOI itself. Those referrals should also be reported monthly to the Council for review, and released to the public—as should the results of all DOC IG investigations. After all, as Supreme Court Justice Louis Brandeis famously pointed out, "sunlight is the best disinfectant."

Second, we must put BOC on the public stage, and give it stricter responsibilities. Right now, the Board receives and is tasked to evaluate all internal reports of abuse and wrongdoing at Rikers. Its reporting of these incidents and their findings, however, is largely at its own discretion. That's not independent oversight. BOC must therefore be required to issue regular reports on inmate conditions and complaints system-wide.

Critically, BOC must also be empowered to receive complaints of violence directly from inmates, and directed to establish a secure system for filing them which fully insulates inmates from retribution.

The current grievance system discourages reporting. It is primarily managed internally at the DOC, with little oversight. For example, allegations regarding staff-on-inmate non-sexual assault are referred to a commanding officer. Putting guards on notice that there is active, independent oversight may well make them think twice before engaging in violence.

We can also add real-time oversight by requiring corrections officers to wear body cameras when amongst the jail population. The NYPD is field-testing cameras now, and the same reasons for police to wear them – safety and accountability – clearly apply at Rikers. The Corrections Commissioner has said he will add CCTV cameras—but that's not enough coverage.

A Rikers with real oversight is the best way to ensure our jail doesn't continue to be a national embarrassment. There's no time to lose. If our City and State are serious about real reform, they will undertake a plan that locks down a better future at Rikers, not just a fix for today.

***
Richard Aborn is the president of the Citizens Crime Commission of New York City.