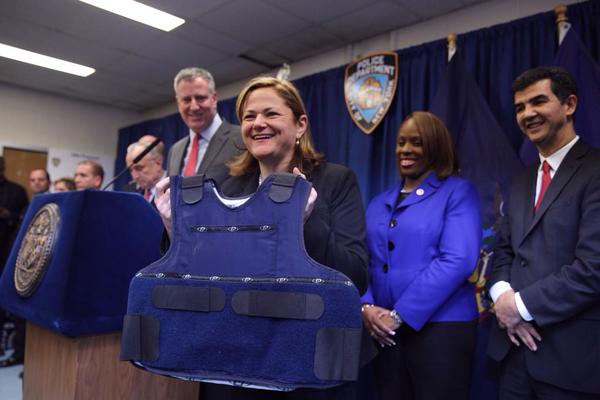 As bi-partisan groups came together in Washington, D.C. last week for a summit on mass incarceration with a focus, specifically, on shrinking the carceral enterprise, a similarly disparate bunch of political leaders here in New York City have coalesced around the opposite message: expanding the size, authority, and mission of the New York City Police Department. Outside of the vague concept of "community policing" no one is offering a cogent policy argument of why the NYPD needs to increase headcount, rather than realign its current resources.

At about this time last year, City Council progressives, led by Speaker Melissa Mark-Viverito, lobbied for 1,000 more police officers and the funding for them, stating that an uptick in shootings in public housing developments warranted more boots on the ground. NYPD Commissioner Bill Bratton swatted down the proposal, stating at the time that the new cops would not solve the problem the City Council was attempting to address and that the City didn't have the funds to support the plan anyway.

Fast-forward a year, and City Council progressives, led by Mark-Viverito, are once again pushing for 1,000 more officers – at a price tag of at least $94 million, before benefits and pensions are considered. They have pivoted on justification and gained furtther support from the political right, members of which approve for the council members' prior rationale. Mark-Viverito's plan for more cops has the supprt of Council Member Steven Matteo, one the Council's three Republicans; Staten Island District Attorney Daniel Donovan; Patrolmen's Benevolent Association head Patrick Lynch; Bratton; and the New York Post.

The new cops are, according to Mark-Viverito, this time essential to the implementation of "community policing," an opaque term of art used by NYPD Deputy Commissioner for Collaborative Policing Susan Herman earlier this month to describe pilot projects in four of the city's 77 precincts (there are also 12 transit districts and nine housing departments). For a small cadre of officers, thirty percent of their days would be spent in social situations with community members, Herman said. On March 12, Assistant Chief Terrence Monahan told the City Council that "community policing" is what the NYPD has always done.

Mark-Viverito and Herman have suggested that increasing the headcount of the NYPD will free up officers from responding to 911 calls, allowing them time to interact with local communities. Herman said the agency is only waiting for smartphones, tablets, and other technology the officers will carry with them before rolling out the program. Why the NYPD needs these and other surveillance gadgets to chat with community members was never asked. But, more importantly, neither Bratton nor the Council has explained why the NYPD, under its current headcount, cannot implement Herman's initiative. Mark-Viverito has made it clear she wants the new cops, no matter what for, even as she has displayed an infirm grasp on what broken windows policing – the ideological underpinnings of the Bratton/de Blasio NYPD – is actually all about.

Critics of NYPD practices have been poking holes in the plan. "Too often, community policing means more intensive and invasive policing of minor disorderly behavior that serves to criminalize mostly people of color without dealing with the underlying causes of this behavior like poverty, homelessness, problematic drug use, mental health issues, and more," Alyssa Aguilera and Alex Vitale wrote recently in Gotham Gazette.

Marbre Stahly-Butts and Dante Berry have made the case for fewer police, not more. Josmar Trujillo has called the NYPD's promised policy change nothing more than a re-branding strategy.

The omission of any critical, number-crunching analysis by lawmakers around adding $100 million to the already stacked $4.7 billion NYPD budget shows the lack of legitimacy the proposal has from a policy standpoint.

The call for more cops is incongruous with the routine trumpeting by the mayor and police commissioner of low crime rates in the city. After all, since 1980 violent crime has fallen precipitously, from 6,500 events per 100,000 residents that year to fewer than 1,000 events per 100,000 residents in 2013. Similarly, nonviolent crime is four times lower today than it was in the 1980s.

Along with falling crime, there has been a decline in enforcement actions. In 2011 the NYPD made 685,724 stop-and-frisks; de Blasio proudly boasts that this number has dropped to under 40,000 in 2014 – although people in highly-policed neighborhoods dispute the characterization of a drastic improvement.

All told these enforcement declines add up to more than 850,000 fewer interactions between the police and public – most gained in just the past five years. Bratton has pegged the number closer to 1 million. With the police doing less work, has this not freed up any time for community interaction?

An officer can get through a stop-and-frisk report or a summons in as little as ten minutes, retired NYPD Detective Carlton Berkley told me recently. But a typical arrest, depending on the seriousness of the charge and the backlog of cases at the precincts and central bookings, can take anywhere from two to ten hours. A homicide, much longer, Berkley said. Even for a misdemeanor arrest the officer has to take the person into custody, bring them to the precinct, take them to the desk officer, place them in the cage, research the penal law, start doing the paperwork, type out the report, fingerprint the arrested person, photograph them, have the case reviewed by a sergeant, transport the prisoner to central bookings, bring them through emergency medical services, and present the charges to the district attorney, Berkley said. All of these steps are delayed if there is anyone else being processed simultaneously, which is usually the case. Most of the time up to the custody transfer at central bookings, officers remain with their partner, so the time is actually doubled.

"Usually cops arrest people not only because they did something wrong, but they do it for overtime purposes. As a second grade detective, my overtime rate was something like $85 dollars an hour, one arrest could mean and extra $850 dollars. A couple extra arrests every month, that's like a second job," Berkley said.

Bratton says that police are simply responding to 911 and 311 calls from communities, but this assertion has been mostly debunked. For example, during the second week of January, one Brooklyn precinct issued 3,300 quality-of-life summonses, which corresponded to just 12 quality-of-life 311 calls during the same period.

It's hard to believe that anyone phones 911 to report a person taking up two seats on the subway, theft of services, possession of drug residue, or standing outside the lobby of the building that they live in, common arrests documented by the Police Reform Organizing Project.

Of course, there are quotas as well. Although NYPD brass have long denied these, Bratton showed his hand following the slowdown last winter, referencing the need to get back to the "normal" numbers. A group of officers is currently suing the City over the practice. PBA President Patrick Lynch, who regularly derides the quota practices, has even made a distinction between necessary and unnecessary arrests, though he too wants more officers.

The bread and butter of the NYPD remains issuing vehicle tickets and arresting and summonsing people for minor crimes, violations and infractions. Excluding traffic tickets there are still nearly 1 million punitive interactions a year despite the reductions. It has gotten so bad that the City is looking to rework low-level offenses because the courts can't manage the workloads. Even Bratton admits that the public wants less enforcement.

District Attorney Donovan should know as well as anybody the extent to which the NYPD could be arresting fewer people. Campaigning to replace disgraced U.S. Rep. Michael Grimm, who resigned in December after pleading guilty to felony tax fraud, Donovan got behind the Mark-Viverito/Bratton plan at an endorsement rally with the court officers' union. "If [Bratton] says we need 1,000 new police officers, we need 1,000 new police officers," he said.

The New York Times recently suggested that the City Council has lost its stomach for standing up to overreach by the police department, making the 1,000-officer gift seem even more like a peace-offering than a legitimate proposal from Mark-Viverito and others who just a few short months ago were walking out of City Council chanting "I can't breathe."

A $100 million political stunt (really $1 billion over the next decade) seems selfish and irresponsible. This time of year one can't escape coverage of the various budget holes that might be plugged with these resources. Just this week high school students marched on City Hall over cuts to their sports programs, and working people across the city reworked their budgets to deal with yet another MTA fare hike.

"To me, they don't really need those 1,000 new officers," Berkley, the retired NYPD detective said. "They'd be better off spending the money to open up some of these community centers."

***
Nick Malinowski is a social worker and independent journalist, living and working in Brooklyn; and is on Twitter @nwmalinowski.