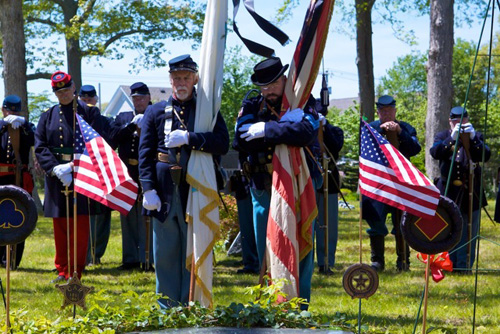 Today marks the 150th anniversary of the Confederacy's final, April 9, 1865 surrender at Appomattox—an occasstion that will be celebrated widely. It also provides a reminder of some of the darkest days in New York City's history, where at the time of that surrenden, the scars had not yet healed from the bloodshed of two years prior.

The Draft Riots of July 1863 indeed remain one of the most frightening episodes in the city's history. The Brooklyn Daily Times called the first night a "demoniac Carnival of Riot, Murder and Conflagration." And three more days of terror were yet to come.

Those of us who teach and study the era typically see it as the low point in the city's Irish-black relations. Yet the narrative becomes slightly more upbeat when viewed from across the East River, in Brooklyn.

The basic storyline of the riots remains that struggling immigrants from the Emerald Isle had every right to be angry that rich New Yorkers, many of whom profited handsomely from the war, could buy their way out of the draft (for $300). But when the mobs burned down the Colored Orphanage Asylum in Midtown, the deranged contempt many Irish held toward black people was plainly evident.

Yet while madness prevailed in Manhattan, the city of Brooklyn was comparatively a citadel of order. A mix of federal troops, police (many of them Irish), and armed militias guarded armories in Fort Greene and Brooklyn Heights. And while Greenpoint police placed a cannon in front of the ferry terminal, German immigrants made Turner Hall in Williamsburg a safe haven for all blacks seeking refuge from violence.

Both of Brooklyn's daily papers, the Daily Eagle and the Daily Times, provided a steady stream of reports about how the conflict played out on both sides of the river. But as seen in the description quoted above, the Times was the far more passionate observer.

That difference stemmed from the allegiances of the two papers. The Eagle was an organ of the Copperhead (or Peace) Democrats, which supported the Confederacy; the Times was aligned with the War Democrats, who advocated defeat of the Confederate insurrection but did not oppose slavery.
Brooklyn, though a haven for abolitionists led by Henry Ward Beecher, was run by a War Democrat, Mayor Martin Kalbfleisch, a chemical magnate from Bushwick. As mayor during the Riots, Kalbfleisch sought to organize Brooklyn's defenses; as congressman representing the area two years later, he voted against the 13th Amendment. Just like Manhattan, Brooklyn's economic ties to the South shaped its politics.

As the Riots broke out, the Eagle squarely blamed Lincoln and the draft law, while the Times put the onus on the "rebel-sympathizing element" in the city, which whipped the city's working class into a frenzy of "domestic revolution." Copperhead politicians and newspapers, the Times insisted, were responsible for igniting the fire in Manhattan.

For good reason, Brooklyn's black population also felt threatened. There were accounts of three black men being thrown into the East River in Greenpoint, by culprits "wild with enthusiasm." It's not clear whether the assailants were Irish, but we can tell that some were working-class (wearing "red flannel shirts and overalls") while others a notch above ("dressed in full suits"). Wherever black people lived, whether on Warren Street in Gowanus or in Weeksville, rumors of potential mob violence abounded.
Amidst the hysteria, many took bold action—and the Times' accounts show that even during this most senseless outbreak of racial conflagration, some members of the city's Irish community stood tall.

In a short entry headlined as a "Praiseworthy Case," the paper reported that an "Irishman" in Greenpoint came upon a group of "wicked and malicious boys" beating and stoning a black teenager. The Irishman rescued the young man, carrying him away to safety "while the boys hooted at (the Irishman) and yelled after him that he would suffer" for his actions.

Even more dramatic is the entry dubbed "More Box Browns." In his new book, Gateway to Freedom: A Hidden History of the Underground Railroad, Eric Foner tells the story of Henry "Box" Brown, who traveled in a wooden crate from Virginia to Philadelphia in 1849.

On July 17, 1863, recapping the third day of the Draft Riots, the Daily Times reported a story about the original Brown's local successors:

We understand that two inoffensive colored men were yesterday enabled by the following stratagem to flee from the inhospitable streets of New York and arrive safely in Williamsburgh: One was stowed in a molasses hogshead and the other in a large box—both marked 'this side up with care'—in which manner they were carefully and promptly forwarded by express. We further learn that these two men are indebted to the connivance of two young Irish women, fellow servants, for originating and consummating this clever trick. This ruse has before this been successfully adopted by the victims of slavery, but who would have supposed that innocent and unoffending creatures would be forced to thus flee from a great metropolis, in which perhaps they were born, to avoid death at the hands of mob? After all, does the world move?

A pair of anecdotes about valor amidst savagery by no means rewrites the story of the Irish role in the Draft Riots, nor does it alter the fact that both Manhattan and Brooklyn were dangerous places for African Americans during the Civil War era. Indeed, as we commemorate the end of the Confederacy, Foner's book reminds us that there was plenty of pro-South sentiment here in the North's leading city.

But these tales of courage and sacrifice on the part of everyday Irish men and women nonetheless serve as a reminder that even during the worst moments of senseless racial antagonism, humanity does survive.