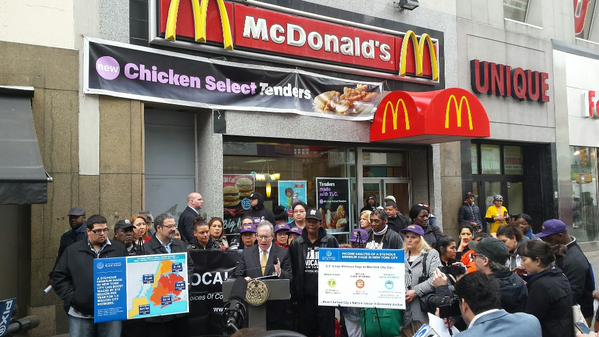 After years of wage and family income declines since the 2008-09 recession, several signs are emerging of real wage growth in New York City, according to a new report from the Fiscal Policy Institute. The three major government economic data sets all point to fairly widespread and firmly-established wage growth beginning in 2014.

-Average private hourly earnings increased 3.3% for the six months to February 2015 vs. the same period a year ago, according to the Bureau of Labor Statistics. This is twice the annual average 1.6% gain from 2009 to 2013.

-While wage gains were greater for high-wage workers in 2014, low- and moderate-wage workers also saw improved wages in 2014 compared to the 2009-2013 period.

The wage trend is clearly up over the past year, but average wages for the typical New York City worker are still below where they were before the recession. Inflation-adjusted average annual wages were 2.1 percent lower in 2014 than in 2007 for private non-financial workers.

Still, the recent wage trend is decidedly moving upward. Why is this recovery finally starting to generate wage gains after so many years of stagnant or declining wages and incomes? Rising labor demand and falling unemployment are key factors.

-The city's job growth continued strong in 2014 for a fifth consecutive year with a greater share of job growth in middle- and high-wage jobs than earlier in the recovery; and

-Unemployment fell more sharply in 2014 than in prior years.

Employers responded by raising wages in many sectors of the local economy. In addition, policy choices played an important role.

-Two state minimum wage increases have lifted the wage floor by 20 percent since 2013;

As long as the economy continues its moderate growth pace, average wages should continue to rise 2 to 4 percent a year over the next few years. Most of the settled City labor contracts will provide annual increases through 2017 or 2018.

It is very welcome that the recovery is finally generating real wage gains in New York City. Strong job growth and lower unemployment should create tight enough labor market conditions so that employers need to offer workers better pay. These long overdue wage gains will help hundreds of thousands of families cope with the city's high living costs and will contribute to the sustainability of the recovery by pumping additional consumer spending into neighborhoods across the city. This will help extend the current expansion which is the first one in New York City since the 1960s that has not relied heavily on Wall Street.

Yet, further changes are needed so that prosperity is more broadly shared. Wage gains have been greatest for those who are already better-compensated. Public and private policies need to ensure better results for those lower down the wage spectrum.

Forty-two percent of families, encompassing 2.7 million New Yorkers, have incomes below the level necessary to provide for basic family needs.* Eighty-three percent of the families below the self-sufficiency standard have one or more workers. Clearly, many workers just are not making wages adequate to sustain their families without having to turn to government for assistance. Government assistance is essential and should be available to aid families in need. But, wages for hundreds of thousands of low-wage workers continue to fall short in allowing them to provide for their families.

Additional policy actions will be needed to make sure that lower-wage workers see meaningful wage gains. For example, the sector that pays the lowest average wages is Social Assistance, largely comprised of nonprofit organizations providing social services under contract to government. City government has a responsibility to fund wage increases in the Social Assistance sector where half of the workforce that is predominantly women of color earn less than $15 an hour.

In addition, Albany should follow the lead of a growing number of other states that are raising minimum wages above $10 an hour. A target of $15 an hour may seem like a lot compared to current minimum wage levels ($7.25 federal, $8.75 New York State). On an annual basis $15 an hour comes to about $31,000—roughly the supplemental poverty measure for a 4-person family as estimated by the City's poverty research office, the Center for Economic Opportunity.

For wage gains to continue, it is important that the Federal Reserve keep interest rates low enough to not choke off economic growth, and with it, the long-delayed promise of rising living standards for millions of New Yorkers.

*Diana M. Pearce, Overlooked and Undercounted, The Struggle to Make Ends Meet in New York City, Prepared for the Women's Center for Education and Career Advancement with support from The United Way of New York City, The New York Community Trust, and City Harvest, December 2014. Seventy-eight percent of households with inadequate incomes are headed by a person of color.

***
Have an op-ed for Gotham Gazette? E-mail editor Ben Max: This email address is being protected from spambots. You need JavaScript enabled to view it.