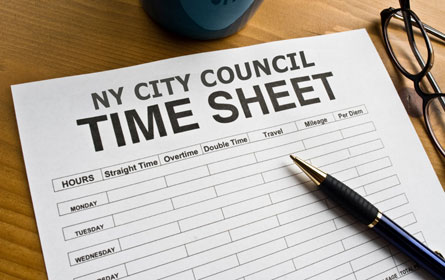 We want and expect our City Council members to be the best and brightest our city has to offer, but it is becoming harder and harder to expect top-of-the-line professionals to choose public service. A recent Gotham Gazette article reported that many City Council members earn outside income, with some making substantial amounts. This suggests that New York City's council members should be full-time city employees. Such a change would go a long way to truly reforming our city government.

Currently, council members make $112,000 per year (I'm one of a handful of council members who doesn't receive a "lulu" for chairing a committee); our city's absurd tax burden just about cuts that in half. I own my home in my district, and that is an expensive undertaking even by New York City standards. By no means am I asking for sympathy, I feel that I’m a lucky one -- I live comfortably, and I'm very thankful for that.

Millions of New Yorkers no doubt pay their bills while earning less than their council member makes. Even though council members do have to disclose their incomes, the salary ranges they report have enormous variation -- sometimes hundreds of thousands of dollars. You could throw a dart at a board with random salaries on it and make a better guess at what your council member earns moonlighting.

Rather than have all this vague disclosure, the city should mandate that council members put in 40-hour weeks to enable them to provide true, full-time constituent services. Along with that, the city should increase the pay for the position. We should have to fill out time sheets just as our subordinates do and account for our time. Of course, some of the members already devote far in excess of a 40-hour week to their districts and the city, and for that, I am grateful.

We need to make an investment in our city's legislative body that will ultimately make the council stronger and more responsive to the people. I consider myself a full-time council member, working over 60 hours a week for District 19. I come to my council office every day and go to every council meeting and attend meetings for six different committees. I meet with community leaders and constituents throughout the morning, deal with office matters and travel around my district and the city to events in the late afternoons and evenings, including weekends. My district office is open on weekends and has a late night each week to better serve the varied schedules of my constituents, and we also are available on the web; I even update my major events and happenings on Facebook and Twitter to keep people informed.

In saying this, I'm not digging for compliments. As I see it, I'm just doing my job. But technically, the role of council member is only a part-time position. Many of my colleagues work full- or part-time elsewhere, and who can blame them? They are accustomed to earning more than their council salaries in the private sector, and it's perfectly legal (assuming they avoid conflicts of interest, of course). And for many, the extra work is necessary to make ends meet.

Making the job full-time would give New Yorkers the complete attention from their elected officials that they deserve, and constituents would notice the difference. Council members would be more active in the community and be more hands-on in addressing their constituents' concerns. Leaders in business, law and other fields would be more inclined to run for public office and the entire city would benefit from the dedication.

Dozens of city department heads make over $200,000 per year, as well they should. They are top-shelf leaders and professionals who run complex agencies, supervising hundreds or thousands of personnel. Executive-level talent will earn at least twice this much, if not far more, in the private sector. And running New York City's bureaucratic, heavily regulated and sometimes archaic government is as challenging as any job you’ll find in the courtroom or on Wall Street.

We've seen the conflicts of interest that occur when elected officials run businesses on the side. For example, former Senate Majority Leader Joe Bruno was taken down by the blurring of the lines between outside income and political influence. It is not even the actual scandal or wrongdoing that will happen no matter how careful we are; a move toward full-time legislators would provide an atmosphere where even the very appearance of impropriety could not survive because influence peddling would have been largely stamped out.