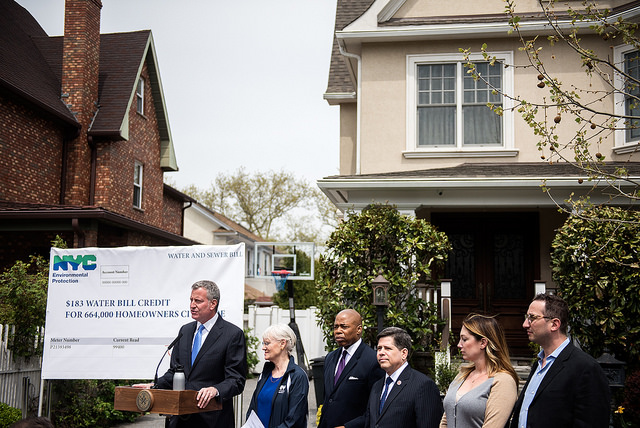 Passing the buck is one thing. Passing seventy million bucks is quite another.

Each year, New York City sells between $70 million and $120 million in unpaid tax debt, water charges, and emergency repair loans to a private trust. These liens—which enable the owner to foreclose on the property—then increase rapidly in value. The trust can charge nine percent interest on 1-3 family houses and 18 percent interest on multifamily housing, compounded daily.

Yes, daily. Total tax debt can triple or even quintuple in a year.

For homeowners who fall behind on their taxes and cannot enter into a payment plan with the City, being put into the tax lien sale means shooting down a steep waterslide into a deep pool of debt. Predatory lenders and equity firms often prey on them as they either try to hang onto their property or sell it for as much equity as they can possibly keep. Sometimes even being on the tax-lien sale list can lead to foreclosure by a lender.

For tenants in buildings in the tax lien sale, times can be just as hard or worse. Landlords tend to pay their taxes even if they withdraw services from a building: they want to hang on to their property. But when they stop paying taxes and end up in the lien sale, it’s often a sign that the building is already in deep trouble. Being in the lien sale doesn’t make it better. Under pressure to sell, landlords often try to harass tenants out because empty buildings sell for more than full ones.

Nonprofit organizations such as churches, daycare centers, and community gardens also find their property in the lien sale in spite of the fact that their property should be exempt from local taxes. The tax lien sale can wipe out years of tax benefits that add up to public investment in these organizations if, for reasons of age, illness, death, or simple ignorance of, or inability to navigate the Department of Finance’s new online system to renew their tax exemptions, they fail to do so in time.

Meanwhile, the city is dealing with an unprecedented homelessness crisis, an affordable housing shortage, and—by its own lights—a dearth of land and property with which to help solve these problems. And yet, at the same time, for the last twenty years, it has given up its own power to foreclose on much of this property and to preserve it for affordable housing and to meet other community needs in favor of selling this right to a bank-managed, private trust.

This wasn’t always the case. Before Mayor Giuliani instituted the tax lien sale in 1996, the City did foreclose on tax-delinquent housing. It wasn’t always a pretty story. The City managed much of this housing poorly. But beginning in 1986, under Mayor Koch, it used a lot of this foreclosed property to create over 250,000 units of housing. Much of this is the only truly affordable housing for poor people in the city apart from public housing.

With this year’s tax lien sale on Thursday, May 12, the time for reform is now, so that this year’s is the last of its kind.

The City doesn’t have to go back to the bad old days of owning thousands of units of foreclosed housing. It could divert the majority of the more than 4,000 properties a year from the lien sale and make huge strides toward meeting Mayor de Blasio’s goal of preserving or creating 200,000 units of affordable housing.

Through regulatory agreements that subordinate tax debt to permanent affordability requirements, and foreclosure and disposition to nonprofits like community land trusts and mutual housing associations (much like large, low-income cooperatives), the City can put financially shaky housing on new footing by realizing economies of scale in purchasing and management. It can preserve nonprofit assets and the public investment that went into them, and it can even turn vacant lots into affordable housing opportunities. By keeping these properties out of the lien sale, it can keep them from becoming prohibitively expensive to save.

Would it cost money? Of course. But so does passing the buck for New York’s housing crisis to generations to come.

***
John Krinsky is an associate professor in the Department of Political Science at The City College of New York and a board member of the New York City Community Land Initiative.