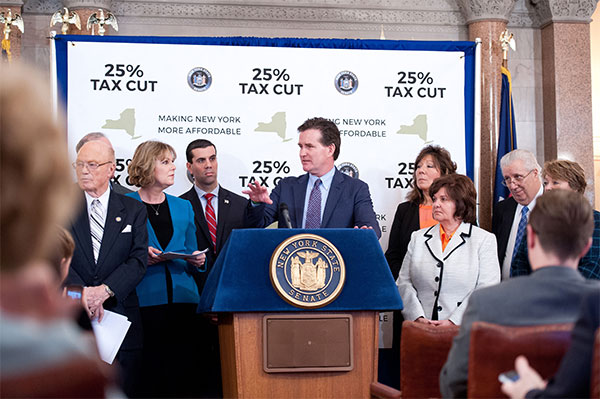 Whether it’s at the state or federal level, recent history has demonstrated that when one party controls government, checks and balances go out the window. Recent history has some important lessons as we approach this year’s crucial elections.

In 2008 Democrats took control of Congress and along with the election of President Barack Obama, controlled the executive and legislative branches in Washington. In Albany, for the first time since 1964, Democrats gained a majority in the state Senate and along with Democrats in the Assembly and Governor’s office, controlled all of state government.

In Washington, Democrats enacted Obamacare and tax increases to pay for a health care program most people didn’t want. They ignored larger economic issues and failed to deliver on things Americans really wanted like jobs and tax relief. They rejected compromise and bipartisanship and governed largely on their own.

In New York, it was even worse. Democrats had a lock on state government and controlled the Legislature and every state-wide elected office. In the state Senate they set out on a path that rejected bipartisanship in favor of an agenda that left many without a voice, particularly upstate and in the suburbs.

Emboldened by their new majority status and dominated by New York City members, Senate Democrats had to prove they could govern and deliver results. And deliver they did. But in doing so they nearly bankrupted the state and made it more difficult for middle class families to make ends meet.

Without a single Republican vote, they enacted record spending hikes and some of the largest tax hikes in state history. New spending totaled $14 billion, matched by $14 billion in new taxes enacted. A new MTA tax on businesses was instituted and STAR rebate checks for homeowners were taken away. Limited state resources were shifted to New York City at the expense of upstate and the suburbs.

Democrats presided over a dysfunctional Senate where chaos ruled, culminating in an uprising led by renegade Democrats that produced an unprecedented disruption in state government and a constitutional crisis that forced the state’s highest court to step in and restore order.

New Yorkers clearly had enough. They took matters in hand and returned Republicans to the Senate majority in 2010.

Working with a new governor and more recently, new leadership in the Assembly, Senate Republicans got things back on track. They turned a $10 billion deficit into a surplus. They delivered six on-time budgets, enacted a property tax cap and new rebates for homeowners. They produced record increases in aid to education and delivered the largest tax cuts in state history.

They also undid much of the damage. New payroll taxes on businesses were repealed, property tax rebate checks were returned, and damaging cuts in education aid that forced schools to needlessly suffer were restored.

But some of the damage could not be undone. The disruption and divisions within the Senate Democrat Conference were beyond repair. Many senators grew frustrated with the dysfunction and misguided policies as their moderate views no longer fit in. They didn’t feel welcome.

So they did something about it. A number broke away and formed a separate Independent Democratic Conference, the IDC. Another decided to sit with Republicans and join their conference. All were determined to restore bipartisanship in the Senate. Together they forged a working partnership with Majority Republicans that continues to this day.

But some divides remain. None more so than the upstate-downstate divide, which continues to challenge lawmakers. Democrats, with their majorities overwhelmingly from New York City, see urban policies that favor New York and other large cities as their primary focus. Republicans fight to ensure that upstate and suburban areas get their fair share.

It is a constant battle. And without a seat at the table, upstaters and suburbanites get left out and suffer the consequences. We’ve seen it happen.

That’s why maintaining a Republican Majority in the Senate is critically important. Their members are from upstate and downstate; from suburban, rural, and urban communities. They give voice to small businesses and middle class New Yorkers and serve as their protectors in a government dominated by New York City interests.

Having spent nearly 30 years in the Senate, I witnessed it all. I watched Republicans serve as a responsible check on Assembly Democrats and governors from both parties. I saw them stop tax increases and government overreach because they were the lone voice of reason. And I was there when battles were lost and compromise was necessary to keep government functioning.

In my last two years, with New York City Democrats in charge, I also saw Republicans entirely shut out of the governing process. I witnessed the dysfunction and chaos that ensued and policies that nearly bankrupted and ruined our state. It was enough to convince voters that they had to change course.

In November voters will be faced with a similar choice. They can maintain the checks and balance so vital in our democracy or they can give Democrats sole control of state government and enable a New York City Mayor like Bill de Blasio to expand his reach on Long Island, the Hudson Valley, and even upstate.

Now that we’ve come this far, New Yorkers don’t want a return to the past. They want a healthy two-party system and assurances that all regions are treated fairly and equally. That’s why Senate Republicans should, and I believe will, be returned to the Senate Majority. Republicans offer the best hope to those who want checks and balances in government and the accountability that comes with it.

***
John McArdle is President of Capitol Communications, a government consulting and communications firm. He worked in the State Senate from 1981 to 2010 and was Communications Director for three Majority Leaders.