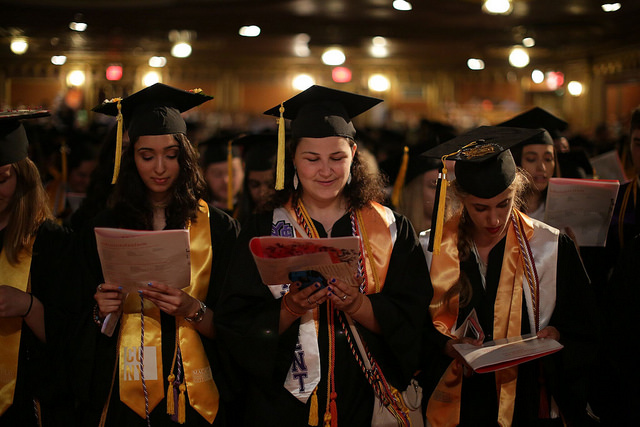 (photo via CUNY Office of Communications)

Every year thousands of undocumented youth graduate from high school with a singular hope of realizing their American Dream and making it to college. Too often, though, these dreams are deferred as immigrant youth are denied fair and equal access to state financial aid.

There is a solution to this injustice: the New York Dream Act. The bill would promote education equity, ensuring that every student has an equal opportunity to fulfill their dream of attending college by allowing immigrant youth access to New York’s Tuition Assistance Program (TAP). For too long, Republican opposition has allowed this legislation to languish in Albany. Now, with Democratic control of both chambers of the Legislature, it’s time to put this bill in the hands of Governor Cuomo, who has already signaled his eagerness to sign the Dream Act into law in the first 100 days of the 2019 legislative session.

While states cannot change the federal immigration status of undocumented youth, they can take steps to protect and expand opportunities for them in the face of xenophobic attacks lobbed from Washington. As the original and current sponsors of the Dream Act in the New York State Assembly, where it has passed six times before, we know New York ought finally to embrace its moral responsibility and allow our immigrant youth true access to college education.

Several states, including Texas, New Mexico, and Minnesota, have already passed bills that provide tuition equity for all students, regardless of immigration status. The Garden State became the latest to join the effort this year when Governor Phil Murphy signed the New Jersey Dream Act, allowing undocumented students there access to college. Shamefully, New York, long known as a beacon of immigrants, has lagged behind.

Take for example the story of Olivert Saldivia. Olivert graduated high school in 2015 but he faced a huge barrier to realizing his dream of attending college without access to state financial aid. Unlike their peers, undocumented students like Olivert do not qualify for student loans, work-study, or any other financial assistance, leading to uncertainty and doubt about their future.

Undeterred and fueled by the knowledge that he wasn’t the only one who had dubious dreams of attending college, Olivert teamed up with the community organization Make the Road New York to fight for the Dream Act. Today, while working several jobs and with the assistance of private scholarships, Olivert is a year and a half away from graduating as a mechanical engineer from the New York City College of Technology. His story is not unique, but still more aspiring students like him have been prevented from pursuing higher education altogether.

Francisco Moya, now a City Council Member representing Queens, was the lead sponsor of this legislation in the State Assembly from 2013 to 2017. Year after year the State Assembly delivered on its promises to undocumented youth, passing the Dream Act for six consecutive years. Yet, it has made it to the Senate floor just once. In its lone 2014 appearance before the Republican-controlled Senate, the bill came up two votes short.

Now, with Assemblymember Carmen de la Rosa as the new lead sponsor carrying the Dream Act, the Assembly is poised to pass it again. But passage through that body is not enough for our communities and that’s why are fighting to make sure the Senate finally sends this bill to the governor’s desk.

The moral case aside, the New York Dream Act is also a smart deal for New York. With regards to the state budget, the cost is negligible, according to reports by the independent and nonprofit research organization Fiscal Policy Institute and the New York State Comptroller, and would bring much larger benefits in terms of the tax revenue increase and economic contributions of the students who would be able to attend and graduate college. A person who earns a bachelor’s degree pays more than $60,000 in additional state taxes over time compared to someone with only a high school diploma.

Undocumented youth have waited long enough. In 2019, with a Democratic majority in both New York Assembly and Senate, there is no reasonable explanation as to why we cannot deliver for our immigrant youth in making sure they have equal access to state financial aid.

We believe in a New York where your immigration status should never be a barrier to access for a quality education. This is our time to send a strong message to the Trump Administration: New York protects and supports its immigrant youth.