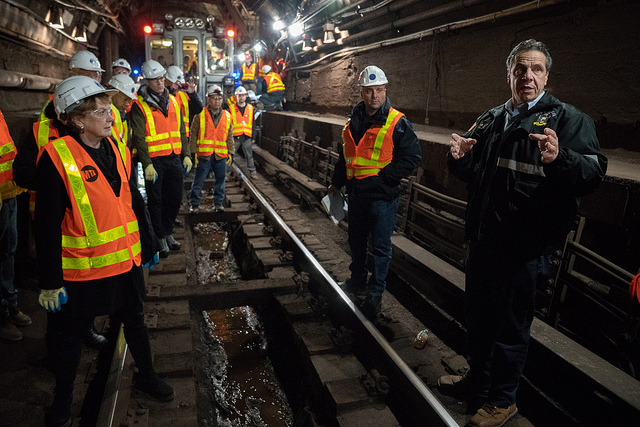 There’s far more to what Governor Andrew Cuomo is saying than what he says at a major announcement. And when an announcement concerns New York’s public transportation, you can bet it’s a calculated communications decision with serious long-term implications.

On Thursday, January 3, Governor Cuomo announced he was slamming the brakes on the L train shutdown. After consulting for three weeks with an independent panel of experts, his team insists repairing the Canarsie Tunnel connecting Brooklyn and Manhattan can be done with only night and weekend disruptions for 15 to 20 months, tossing aside the 15-month full closure three years in the making by the Metropolitan Transportation Authority (MTA) and scheduled to begin in April. It was a bold bet by New York’s most powerful politician, who has inconsistently taken responsibility for and interest in the transit authority that he has de facto control over.

Many commuters and real estate interests rejoiced, some transit advocates rang the alarm, and several transit officials masked frustration with bewilderment. For the public, there’s a fair bit of confusion to clear up -- it’s hard to make sense of conflicting messages and a lack of comprehensive information. How are riders supposed to think about this new plan? Does the MTA have any idea what it is doing? Where was the governor all this time?

Ultimately, what can the public consider to be truthful?

While the governor insisted that he had now involved himself with the L train plan -- which would disrupt the lives of hundreds of thousands of commuters, business owners, and others -- because of the magnitude of the issue and the pleas of multiple constituents, many questions linger. Along with the aforementioned, one especially important one: What’s Cuomo really doing here? Cuomo has manipulated public opinion to execute transit repairs before, and it’s happening again during this L train saga. He’s again taking a calculated political risk.

Consider the governor’s role in 2017’s “Summer of Hell.” Originally, the “Summer of Hell” had nothing to do with a subway system in decline. The catchy name’s source was none other than Governor Cuomo. He created this crisis narrative at a May 23, 2017 announcement to brace LIRR commuters for six weeks of Amtrak’s necessary repair work at Penn Station. Yes, that was it. But it became much more.

Amtrak’s plans were already two years in motion and announced one month earlier. Yet, Cuomo parachuted in to blame Amtrak for Penn’s state of disrepair, tell Long Islanders to adjust their established commuting routines, and present new contingency plans (ferry, bus and ticket supplements). The weeks leading up to the “Summer of Hell” were terrifying for many Long Islanders who commute into Manhattan.

In the end, Cuomo’s exaggeration made the “Summer of Hell” anything but. The crisis narrative drove Long Islanders off the LIRR, the underused ferry and bus services were curbed in the first week of repairs, and trains ran better during a supposed “hell” than at any time in the past two years. Cuomo manufactured a crisis worth his addressing by lowering expectations, then being able to take credit for exceeding the low bar he set. However, the “Summer of Hell” phrase he applied to Penn quickly became used to capture the state of transit more broadly, and liberally wielded against the governor by electoral opponents and other critics.

Cuomo’s “Summer of Hell” announcement and L train un-shutdown announcement were strikingly similar in format, with the governor intervening at the eleventh hour to shake things up when a great deal of planning, both on the infrastructure and commuting sides, had already been done. On the L train, Cuomo went after the MTA and city Department of Transportation, reassured Brooklynites their neighborhoods can survive the partial closure, unveiled his new plan, and touted the state’s (read: his) willingness to innovate -- all the while trying to sweep under the rug the fact that he stayed away from shutdown plans for the previous three years.

Again, what’s the Governor really doing here? I spent more than a year researching the “Summer of Hell” and New York’s transit management, uncovering why Cuomo would popularize impending doom and what his transit priorities are. He seizes opportunities to be, or appear to be, a savior who is helping commuters, while minimizing his political risk.

As he’s swooped in on the L train shutdown, Cuomo’s entire frame of discussion relates to commuters and commuting disruptions, with his plan presented as one that will drastically reduce challenges for L riders.

Cuomo’s particular project focus is controllable (ideally media-intense) situations: ones he can use to demonstrate tangible success to the public, because he’s fairly certain the outcome will raise a pathetically low bar for service. Though plowing through bureaucracy makes projects like the new Tappan Zee Bridge tough to execute, Cuomo uses it as an opportunity to brandish his image as a “doer,” even if he oversees the entrenched bureaucracy he maligns, and has positioned himself as a champion for infrastructure by taking some service bar layups, per se. He replaced the truly hellish Goethals Bridge, is renovating JFK and LaGuardia Airports (the country’s worst), installed WiFi and LED lighting in ugly subway stations, and built an app to more conveniently buy train tickets. And he made sure the new Tappan Zee is named after his father: the Mario M. Cuomo Bridge.

For the L train shutdown, Cuomo’s making his willingness to innovate visible relative to that of the MTA, which he does control despite his protestations. Presenting his advice from engineering experts, Cuomo touted big names like Tesla, Cornell, and Columbia so lay people understand how “outside the box” and the traditional bureaucracy he is going to address the tunnel and its users. He talked about never-tried-here methods that will make New York a national model, using European infrastructure methods considered superior, giving him another public relations advantage.

It’s difficult to know just how productively innovative Cuomo’s proposal is, though evaluations are ongoing, with the MTA Board briefed on Tuesday during an “emergency” meeting held at Cuomo’s behest. His language is reminiscent of when he solicited outside proposals to modernize the subway in 2017, as part of a “Genius Challenge” that ultimately bore little fruit. Ideally, the new L train plan will make a much bigger impact than the Genius Challenge did, but at this stage, there are plenty of questions to be answered.

In the past, Cuomo’s used project delivery as conduit to more power, and he’s clearly using the L train in a similar fashion. Situations where he’s able to beat the poor transit status quo are opportunities to show the state should be directly in charge, when it suits his narrative.

Cuomo’s projects at and around Amtrak-controlled Penn Station cultivate a potential takeover there, too. For starters, the governor is spearheading Moynihan Train Hall at Penn’s western edge without including New Jersey Transit on the project. Cuomo’s involvement in 2017 track repairs also saw him propose that New York State, not the federal government, operate Penn Station. Since then, Cuomo’s attempted to take control of the whole neighborhood around Penn.

For the subway, Cuomo has repeatedly questioned the MTA’s convoluted governing structure and wants to “blow it up.” He’s forcing the MTA Board’s hand in deciding which L train project is best, and some members (largely Mayor Bill de Blasio appointees) are publicly frustrated. However, the public’s discontent with the MTA and warranted aversion to a full shutdown gives the governor leverage in changing shutdown plans today, and blowing up the MTA tomorrow.

Cuomo needs public support in order for his takeover to work -- that’s why analyzing his communication is critical. Cuomo knows tearing things down with “outside the box” solutions appeals to desperate commuters, especially those seeking relief from the L-pocalypse. Under the guise of repeated complaints from people in Brooklyn, Cuomo is saving New Yorkers from the pain they’ve already been told is coming.

It’s a stunning reversal in government communication. For three years, officials at the MTA and city DOT were upfront about disruptions with locals and assumed the risk that comes with accountability; in exchange, riders would accommodate changes to daily life. This tacit agreement amounts to a commuting social contract.

Ironically, Cuomo helped write this script during the “Summer of Hell,” except this time (by virtue of association with running the MTA), Cuomo was stuck with accountability for a project he wasn’t running directly. Cuomo prioritizes controllable situations, and fallout from the possibly the greatest planned transit disaster in history does not qualify as such. So, Cuomo is hastily withdrawing himself from the original shutdown agreement -- let’s call it a breach of contract.

If the Board sticks with the original plan, Cuomo’s more off the hook than he would have been otherwise, but transit agencies’ jobs become harder. Floating an alternative is a tease to communities that, in all likelihood, face serious hardship. It hinders the MTA and DOT’s ability to get everyone on board (again) in surviving the “L-pocalypse.”

But, if Cuomo’s plan gets approved, which appears to be the more likely scenario, it spreads pain into more distant, seemingly manageable chunks. Yet, in the quest to absolve himself of responsibility for the old plan, the governor is creating an alternate, riskier scenario: he’s directly accountable for making the L-pocalypse a bearable experience.

Cuomo may have just thrown a low-pressure system into a brewing superstorm, like when the “Summer of Hell” crisis narrative Cuomo created blew up in his face. By intervening on behalf of 230,000 Long Islanders, Cuomo unintentionally gave millions of subway and bus riders city-wide a succinct term to express their long-festering frustrations, plus point the finger his way. Backed into a corner, Cuomo and former MTA Chair Joe Lhota enacted a Subway Action Plan for short-term fixes, though Andy Byford’s long-term Fast Forward plan remains unfunded.

If the L train shutdown plans are scrapped, and the governor does “blow up” the MTA, can Cuomo really pick up the pieces? Only one person ever, former MTA Chairman Dick Ravitch, has proven capable of successfully overhauling the MTA; it took him a decade of nonstop, focused effort. With that in mind, will Cuomo be around long enough and truly committed to implement meaningful structural reform?

Over the coming weeks, it will be critical to translate what Cuomo tells the public into his future transit action items. In the meantime, it’s essential all the questions about the new proposal are answered, and to remember 2017 as we examine Cuomo’s words and actions with a critical eye.

***
Tim Lazaroff is a freelance journalist specializing in transit.