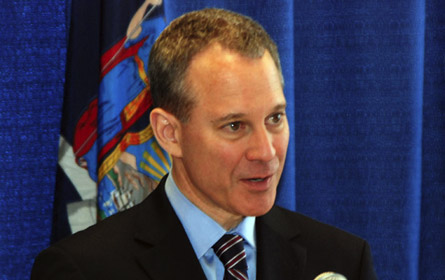 Photo by the Office of the Attorney General
After he pressed for allowing prosecution of banks, Attorney General Eric Schneiderman was booted from a committee of his fellow state attorneys generals considering enforcement actions against unscrupulous lenders.

(Note: Gotham Gazette reached out to a number of people hoping they would present an opposing points of view on the aspects of foreclosure discussed below. We could not find anyone who would do that but would still welcome comments from other sides on this issue.)

It was not all that long ago when the conventional wisdom among America’s working families was that owning a home provided the key to economic security and a life of prosperity. But now, too many families across New York and America live in fear of foreclosure. Since 2007, nearly 8 million homes have entered a foreclosure process.

We can't forget that this situation was not a sudden, unexpected disaster. It was not inevitable. Instead America's mortgage crisis was the direct result of the greedy, immoral and possibly illegal actions by the largest mortgage banks. These companies intentionally pillaged the assets of working families to enhance their own profits, with no regard for the broader good of our communities or our economy.

In order for the American economy to recover and for working families to get back on their feet, two things must happen. First, real relief must be provided to those who predatory mortgage banks preyed upon. Second, those responsible for the mortgage crisis must be held accountable.

As has been widely reported in the press, New York's attorney general, Eric Schneiderman, has been removed from a committee of state attorneys general that the Obama administration convened to take enforcement action against mortgage servicers. The settlement that this committee is close to reaching with the banks -- a settlement supported by many powerful Washington politicians, including Treasury Secretary Timothy Geithner -- would require the banks to pay up to $20 billion. In return, though, the banks would be immune from further prosecution.

By standing against this settlement and ensuring that he can complete his own comprehensive investigation into the fraud and abuse that these banks perpetrated against the public, Schneiderman is doing exactly what we elected him to do: fighting for justice.

This settlement is a bad deal for New Yorkers. Amnesty for those banks that acted with the most egregious depravity will do absolutely nothing to prevent them from acting the same way again. America can no longer trust massive corporations to police their own practices, especially when they have made skyrocketing profits just two years after enjoying billions in taxpayer bailouts. There is no doubt -- no question -- that these very same banks are responsible for the recession that still grips many of New York's working families. The CEOs of these banks have not even gotten a taste of the economic calamity that they have caused.

New York deserves a seat at the table when it comes to ensuring that a fair settlement is reached. In fact, according to the FBI, New York was among the top 10 states for known or suspected mortgage fraud. Since this story broke, over 1,600 New Yorkers have signed Citizen Action's petition in support of Schneiderman’s pursuit of justice.

Some (ahem -- the New York Post) have argued that if the banks had not proceeded with so many foreclosures, thereby reducing their risk of financial losses, then those banks would have been hesitant to issue more mortgages. While it may be true that banks are not usually willing to take risks unless they have a scheme to ensure their financial success, I think that we can all reach for a higher standard for our corporations.

Schneiderman is seeking a full investigation, a reasonable (i.e., more than $20 billion) settlement and the ability to continue to prosecute illegal activity as it is discovered. Without that kind of approach we will no doubt be in the same situation once again. With it, we can have a society where lenders act responsibly and working families can get the loans they need to build their futures.

For far too long, those who have been elected to represent us in government have coddled the super-wealthy while leaving working families to foot the tab. It’s time for our government to protect those who elect them -- not just those who finance their elections. We believe that if justice is achieved, then everyone will be better off. America needs more elected officials like Schneiderman - willing to stand up to the most powerful special interests in the pursuit of justice.