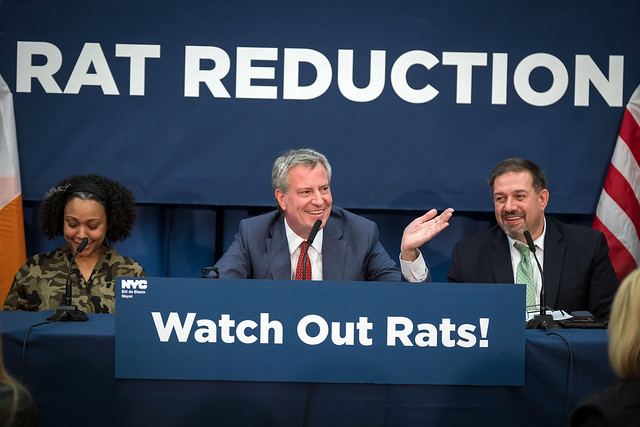 When the New York Times announced that Rats Are Taking Over New York City, the widely-shared article and subsequent discussion overlooked one obvious remedy: reboot New York City’s stalled, neglected Organics Collection Program, and use it to take away a primary food source for rats near residential buildings.

Organics collection was introduced in New York City in 2013 and later incorporated into Mayor de Blasio’s OneNYC plan, which includes an ambitious “zero waste” goal: that the city will send nothing to landfills by 2030.

For residents in all of Manhattan and many neighborhoods in other boroughs, the city provides free plastic bins for curbside collection of organics: food and yard waste that make up 34% of all residential waste according to a 2017 New York City Department of Sanitation (DSNY) study cited at a 2018 City Council hearing. However, the program has stalled -– the city missed its planned deadline of having organics collection in every neighborhood by the end of 2018.

In the areas where the program currently operates, less than 11% of organic waste makes it into the brown bins. So most of New York City’s food waste winds up mixed in with other trash left in plastic bags on sidewalks overnight, and provides a ready food source for rats right next to residential buildings.

Rats can tote a slice of pizza down stairs or climb a subway pole, but they’ll never open the latch on top of a brown organics bin set out for curbside pickup. If New Yorkers could be persuaded (or mandated) to put all their household food waste into these city-provided bins, rats would be locked out of their current all-night buffet on our sidewalks.

In May 2018 after the DSNY froze the expansion of the organics collection program, Commissioner Kathryn Garcia promised “intensive outreach” to “grow participation” in areas where the program exists, but it is hard to find evidence of any such outreach. 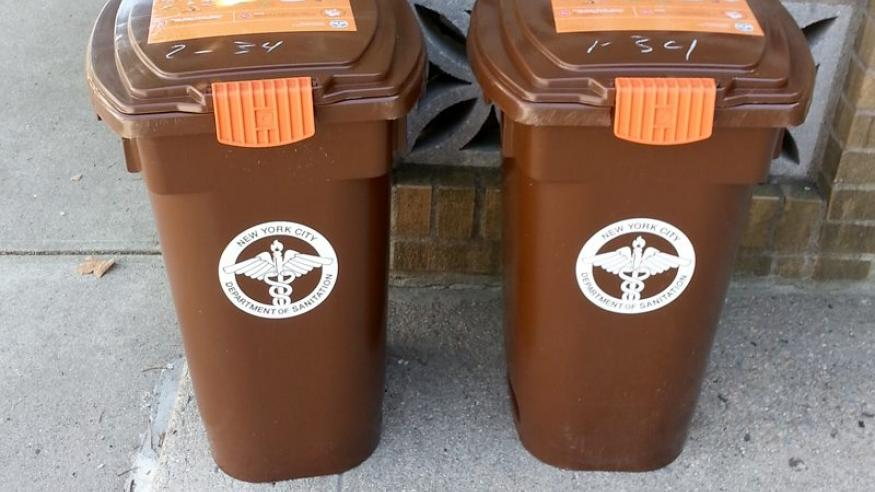 The building where I live has been using a city organics bin for our food waste since the program began, but I’ve watched every other building on our block stop participating in the program. Here in Park Slope, Brooklyn, I’ve never seen any sort of outreach from the city to encourage participation, and in the last two years it has become more difficult to participate. DSNY used to drop off replacements for lost bins, but now it requires residents to drive to its office to pick up a new one. DSNY has also reduced the organics pickup schedule to one day per week instead of two.

The city missed an opportunity in not connecting organics collection to the rat problem. “Zero Waste” by 2030 has the same flaw as “Vision Zero” for traffic deaths -– it’s hard to see it as achievable, or as anything more than a pie-in-the-sky promise. “Separate all your garbage now and we’ll fix climate change in some future mayor’s term” is not nearly as compelling as “Put your food waste in this bin now so you don’t have to dodge rats when you walk out your front door.”

When the city gets complaints about rats in an area, in addition to putting out poison and adding a $7,000 solar-powered trash can to a local park, city workers also should help every residence and business in the area start using organics bins. Some advertising and hands-on assistance would make a huge difference, and make long-term environmental goals possible by focusing on New Yorkers’ quality of life in the short term.

Elected officials are often eager to declare an emergency and announce a quick, expensive response when a long-standing problem pops up in the news. Mayor de Blasio did this in 2017 when he proposed a $32 million “Rat Reduction Plan,” which included a bill to require some buildings to put out their trash at 4 a.m. (that bill never passed). Statistics cited in the Times story show the plan didn’t lead to long-term reductions. Persistent problems demand persistent effort and consistent messaging, especially when the solution requires millions of people to change their daily habits.

When every building in New York City has an organics bin, and every New Yorker has heard how this program can improve their quality of life, then we’ll be a step closer to a sustainable future, and also less likely to step on a rat when we walk down the sidewalk.

***
Tony Melone is a freelance musician and volunteer activist in Brooklyn. On Twitter @tonymelone.