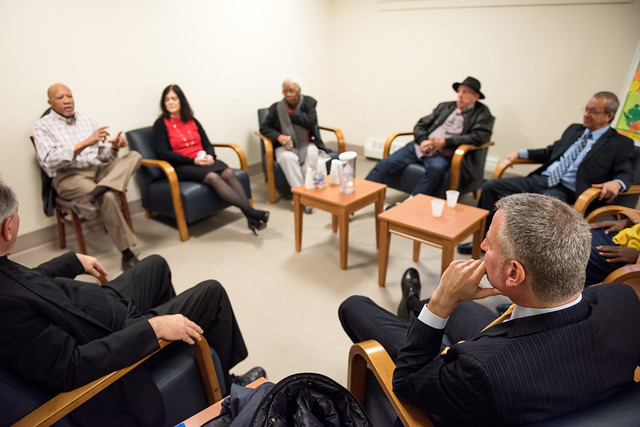 During a recent budget hearing at the City Council, Council Member Stephen Levin asked Social Services Commissioner Steven Banks about wait-times at Human Resources Administration centers. "Have we seen an increase in wait times?” asked Levin; “How are we monitoring wait-times in light of the Jazmine Headley incident and as we're talking about staffing levels at HRA Centers?”

Confident in tone and content, Commissioner Banks answered: "[I]n SNAP and food stamp centers the wait-time is about 20 minutes because 87% of the applications are done online and 93% of the interviews are done by phone, and there's a reduction of foot traffic by more than 40% in those locations.” He continued, “and in terms of the wait-times in the Job Centers...we're about twice as long in those offices as in the food stamp centers."

Our team has conducted a significant analysis of the underlying data the city uses to calculate and report its wait times. We believe that Commissioner Banks’ response is misleading.

The use of misleading data on this matter is a risk for all poor New York City residents, and takes particular importance given the closure of two SNAP (food stamp) centers last year, and the recently-announced closure of the St. Nicholas SNAP Center in Harlem, which is planned for the end of this month.

A Background to Waiting at HRA
Council Member Levin’s May 22 questions above were referring to an incident in December 2018, captured on a cell phone video that went viral, when police assaulted Jazmine Headley and her infant son at a Brooklyn Public Assistance center. Headley had already waited in the center (otherwise known as a Job Center) for four hours before the situation unnecessarily escalated to police violence.

While the media justifiably focused on the physical violence she experienced, Headley’s story also raised another, less-publicized issue that our clients at Urban Justice Center report to us daily: excessive wait-times at HRA that cause upset children, missed days of work or school, increased tension at centers, and unnecessary interruptions in their lives.

New York City’s welfare and food stamp (SNAP) centers are notorious for using wait-times to prevent or delay benefits access. Under Mayor Koch in the 1980s, the city’s efforts to prevent benefits access were so significant that Community Action Legal Services issued a report entitled The In-Human Resources Administration’s Churning Campaign. Under Mayor Giuliani in the 1990s, those in need of food stamps could not even obtain an application until their second center visit. Under the Bloomberg administration, public assistance recipients continued to be systematically discouraged from accessing cash aid by HRA.

Mayor de Blasio’s administration is undoubtedly more receptive of benefits applicants than those that preceded it; however, our analysis of the city’s wait-time data shows that the client experience at HRA is still unreasonable and unacceptable.

In February of this year, in the wake of the violence experienced by Headley, the City Council held a hearing about the experiences of people at HRA centers. When Council members asked HRA officials why Headley’s attempt to complete a seemingly simple task had taken four hours at one of their centers, they explained that her situation that day was an exception. However, the findings we published in our recent Bureaucracy of Benefits report, based on surveys of over 130 HRA applicants and recipients, found that wait times averaged 3.13 hours at Public Assistance (Job) Centers and 2.78 hours at SNAP centers.

Under a local law passed at the end of 2017, HRA must post the “average” wait times at centers on its website. In January 2019, the reported citywide wait time averages were 50 minutes for Job Centers and 45 minutes for SNAP centers. These are the numbers HRA administrators seemingly refer to when publicly questioned about the centers’ wait times, and presumably provided the rationale for calling Headley’s four hour-long wait an “exception.”

In an effort to determine why the city’s publicized wait times are significantly less than what our surveys reflected and what we hear so often from people who go to the centers, we issued a Freedom of Information (FOIL) request for the breakdown of the center wait-times.

What We Found
Our review found that HRA manipulates the data to make it appear as though people are waiting significantly less time in centers and then putting forward numbers publicly that do not match the reality poor New Yorkers experience each day.

The picture painted by city officials in testimony and in the online data is that visits to HRA Centers are fairly simple and quick experiences. But they are not. Furthermore, there are patterns in the data that show disproportionately heavy delays in the Bronx – the poorest borough and where the city has the highest rates of complaints at Job and SNAP Centers (see Bureaucracy of Benefits report).

The data shows that HRA, which is the nation’s largest social service agency and which claims its role is the “effective and efficient administration of more than 12 major public benefits programs, which reflects this Administration's priority of addressing poverty and income inequality,” routinely makes New Yorkers wait several hours at its offices for any and all needs. Our analysis confirms that Headley’s experience with waiting was far more common than officials admitted and resonated closely with what our clients tell us everyday.

1. Ticket-stacking: HRA’s data is compiled by tracking the amount of time that it takes for an individual to be called for a “ticket,” which individuals are given when they go into a center (for the purpose of our analysis, “ticket” refers to the tracking system HRA uses to delineate the reasons for a person’s visit to the center). However, when an individual goes to the center, they frequently need more than one ticket to accomplish a particular task. Sometimes they get multiple tickets upon entering, and sometimes they will be given additional tickets successively, either because the first person they met with was not able to help them or because there are multiple steps to a particular task.

For example, in order to apply for a new Public Assistance case, an individual must fill out a lengthy application and then also complete an application interview. These are each individual tickets. HRA is averaging the data as if each of these is a singular experience for which an individual might visit a center, when in reality, applicants are doing both in one trip. The citywide average wait time in September 2018 for an application was 17 minutes, but the average wait time for an interview was 1 hour and 34 minutes. HRA is averaging these two numbers together in calculating overall wait-time averages, when in fact they should be combined to get a complete picture of the applicant’s wait time.

2. Unweighted data: HRA’s data seemingly does not account for ticket volume by center. For instance, in September 2018, HRA calculates the citywide average wait time for those presenting to resolve a Cash Assistance (CA) missed appointment at 45 minutes. When we calculated the data weighting the amount of time against the amount of tickets for missed CA appointments, we calculated an average wait time of 1 hour and 37 minutes, more than doubling the city’s reported figure.

3. Averaging-in zeros: According to the data, not all centers give out every ticket type in any given month. It is unclear if this is because each center employs its own practices of assigning tickets, or if some centers simply do not see certain needs in a given month. Regardless, the fact that HRA includes the tickets without any data (and therefore zero-minute wait-times) in their overall averaging provides a highly skewed presentation of what is actually happening. For instance, HRA reported (in response to our FOIL request) that the citywide average wait time to see a supervisor was 30 minutes in September. However, five centers did not report any tickets given for waiting to see a supervisor. HRA is including zero-minute waits from these five centers, which skews the citywide average.

5. Excluding service times: The publicly posted wait-time data fails to capture the additional time that individuals spend in the Center actually completing the services they came for, or the “service-time data,” which can be hours.

For the application interview, the citywide service time average in September 2018 was 47 minutes. Combined with the average service time for the application itself (5 minutes) and the wait times for both the application and application interview, an individual who needed to apply for Public Assistance in September 2018 was spending, on average, over 2.5 hours at the center. If they requested to speak to a supervisor for any reason, the overall time would go up to over 3 hours and 20 minutes. In cases where someone is waiting for multiple appointments in one visit, it is likely they will spend the majority of their day at the Center.

The extensive wait-times for benefits is yet another example of how New York City punishes people for poverty. Available data shows that people of color are disproportionately forced to rely on benefits to survive, and that women are disproportionately the “heads of household” for a family’s benefits case. To make matters worse, almost none of the mandatory services for Public Assistance applicants or recipients can be done online or over the phone. That means that in order to receive Public Assistance benefits, one must be prepared to wait – for hours and repeatedly.

While Commissioner Banks says improvements are coming through technology – and we have already seen some of the city’s technological developments unfold for SNAP-only cases – we remain very concerned that there is a significant need for increasing staff at the centers rather than simply focusing on robotic solutions.

And we are very concerned about HRA’s closure of a third SNAP Center this coming month. Of note, that closure will push SNAP recipients assigned to the St. Nicholas Center in Central Harlem to the East End Center in East Harlem, which is already known by advocates to struggle with caseload requirements that lead to long waits and often very serious case errors.

The waiting imposed on poor New Yorkers is long-standing and punitive but is it not inevitable. Increasing staff at HRA centers, increasing the number of benefits centers in each borough, and making it easier for New Yorkers to resolve problems and complete needed actions over the phone and online would all help significantly. Halting the closure of SNAP centers is another immediate step that can be taken to prevent excessive waits and pervasive errors in people’s cases.

Different decisions about allocating resources can be made that would reduce the notoriously frustrating length of time poor people spend waiting for and interacting with the city’s benefits bureaucracy. The question is whether our city is willing to do so.