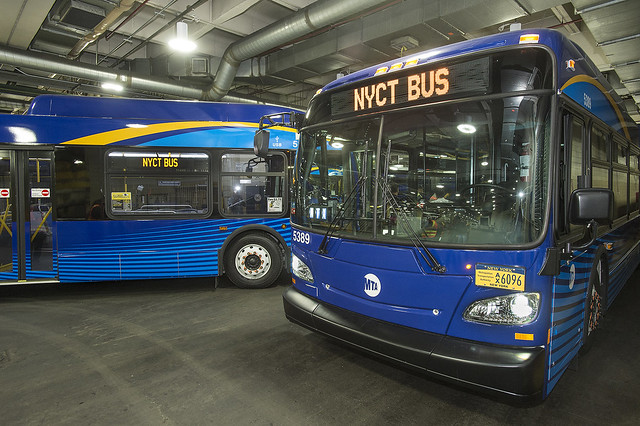 Transit policy is climate policy. In New York, transportation emits 30% of the city’s carbon pollution and 34% of the state’s. Since it’s easier to drive less in a city than in suburban and rural areas, much of that is carbon we can easily spare. When shrinking New York’s carbon footprint, transportation emissions are low-hanging fruit.

Granted, the challenge is stiff. Car registrations in the city are rising, up 9% in the past four years. The city’s own government vehicle fleet has grown 19% in size and 25% in miles traveled in the past five years. City agencies hand out an estimated 150,000 placards that privilege public employees to park their personal cars on our streets, encouraging them to drive rather than ride transit.

Car culture is resilient throughout the city. In many communities, a car is a status symbol. Many immigrants, low-income New Yorkers, and New Yorkers of color drive for a living. Taxi drivers protested the recent enactment of congestion pricing. Even progressives in Greenwich Village and Chelsea objected to shuttle bus service for L train riders displaced by construction.

To their credit, our leaders have made major commitments to transit. Governor Cuomo and the Legislature passed congestion pricing to fund major subway upgrades. Both Mayor de Blasio and the MTA made historic promises and have begun to improve bus service. City Council Speaker Corey Johnson successfully championed reduced transit fares for low-income riders in the city budget and made a public pledge to “break the car culture.” Comptroller Scott Stringer has produced game-changing reports on bus service and commuter rail.

But there’s a lot more to do. Shifting decisively away from cars and toward transit will require major policy change. If done right, it will make the city more equitable, enhance the quality of life for millions of New Yorkers, and help save everyone on the planet from out-of-control climate change.

Second, congestion pricing revenue must be dedicated to fixing the subway. Despite recent improvements in performance, our subway system remains in crisis. While jobs, population, and tourism numbers hit record highs, our subways have been losing riders for three years running, a longer decline than any since the fiscal crisis of the 1970s. The system desperately needs modern signals, new subway cars, and elevators that will provide access to New Yorkers with disabilities.

Third, the city and the MTA must deliver on the promise of better bus service in every neighborhood. Today, our buses are the slowest in the nation, mired in traffic, and bogged down with countless stops along convoluted routes. Bus ridership has been falling for over a decade, along with average speeds.

The mayor needs to build out a robust bus lane network in tandem with the MTA’s redesign of each borough’s bus map. Truly turning bus service and ridership around will require prioritizing buses and riders along crowded commercial streets. It will also mean changing the spacing of bus stops so that buses can get up to speed and keep moving, delivering faster and more reliable service. Properly spaced bus stops should be upgraded with amenities like shelters, benches, legible maps, and countdown clocks.

These commitments will take years to be achieved. Meanwhile, there’s one transit policy item on this session’s Albany legislative agenda that can make a real difference, really soon. Assemblymember Nily Rozic and Senator Liz Krueger are sponsoring legislation (A6777/S1925) that would reauthorize and expand the bus lane camera program citywide.

Dedicated lanes are essential to quality bus service but are only as good as they are enforced.

To effectively prioritize bus riders on busy city streets, bus lanes must be kept clear of obstructions. The NYPD has only so many officers and myriad other responsibilities. Enforcement cameras nudge drivers to steer clear and leave bus lanes to bus riders.

Curbing climate change requires a broad range of policy tools. Many of them involve better transit. Before the end of the session this month, the state Legislature and governor have an important opportunity to put bus riders and the climate first. They should take it.