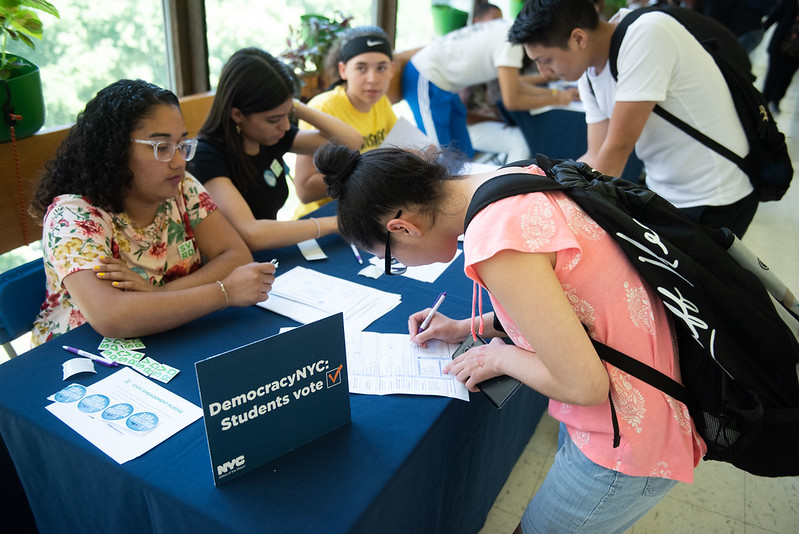 United States Supreme Court Chief Justice John Roberts wrote earlier this year: “We have come to take democracy for granted and civic education has fallen by the wayside. In our age, when social media can instantly spread rumor and false information on a grand scale, the public’s need to understand US government, and the protections it provides us is ever more vital.”

The Chief Justice’s warning resonates loudly today as we face an unprecedented crisis in democracy in our country. A President who consistently lies, threatens to postpone the upcoming election, prevents Congress from exercising its oversight responsibilities, and repeatedly ignores and violates the Rule of Law. At the same time fewer and fewer Americans seem to be meaningfully participating in, or even understand, how government works. A recent survey revealed that only 26% of Americans could name all three branches of government. In the 2018 general election New York ranked in the bottom quartile in the nation in voter turnout.

At the same time we face a related crisis that if not promptly addressed will exacerbate today’s democracy crisis. Specifically, New York provides to its students a frightening lack of adequate civic education -- teaching government (its history, its different branches, and how a law is passed) and training students through hands-on projects how to become engaged in public life.

Participating in our democracy must begin by teaching students how democracy works and the importance of participation in that democracy. “The practice of democracy is not passed down through the gene pool. It must be taught and learned anew by each generation of citizens,” Supreme Court Justice Sandra Day O’Connor once wrote.

This is not happening in New York. The only civic education requirement New York schools must meet is to offer a one-half unit credit in a government course, one credit in US history, and an 11th grade Regents exam in US history and government. There is no obligation that a student learn specific aspects of government, how to advocate for government to take action, or gain personal experience in advocacy.

Both New York State and City have begun to take modest steps to address their deficiencies in this area.

Two years ago New York City created a Civics for All initiative designed to focus on interactive projects that students might undertake to better learn how government works. At about the same time the State created a Civic Readiness Task Force that has proposed a series of recommendations that would require students to complete an action project in civics or social justice. But even if these recommendations are enacted they are not nearly enough. In particular there are no requirements that schools adopt the proposed programs and mandate that all students engage in them, and, with the exception of a $1 million state appropriation, no funds have been provided to help schools train teachers and otherwise implement the programs.

At the present time the lack of adequate civic education has been filled in part by some excellent programs offered by certain nonprofits. But those programs themselves are hampered both by lack of funds and because they reach a relatively small percentage of all students.

There is, however, much more that many outside the school system could do – but most are presently not doing – to advance civic education. Individual judges, for example, could invite students to their courtrooms to observe judicial proceedings, and spend time with students, both in near-by schools and when the students visit their courtrooms, explaining the judicial system to them. In fact, the Second Circuit Court of Appeals, recognizing, to use the words of the United States Judicial Conference, that “civic education is an important component of judicial service,” is taking the nationwide lead in doing just that.

Bar associations could offer – but unfortunately only a few are doing so today – a variety of civic education programs, ranging from mock trial and moot court activities to meeting with students to explain the justice system. Attorneys could volunteer their time to coach mock trial and moot court teams. In addition, attorneys and civic association representatives could visit classrooms to explain to students what civic engagement is and work with students on particular civic projects. And companies and law firms could support these civic efforts both financially and by sponsoring their own civic education projects.

The problem raised by this crisis in civic education must be addressed promptly. As can be seen in the events unfolding in Washington, D.C. every day, our democracy is under attack and we need more participation to make it stronger. We must take immediate steps to educate future voters -- students today -- and let them discover how government works, think about how democracy should work, and, by encouraging their actual experience in civic projects, learn how to participate in it.

***
Michael A. Cardozo is a partner at Proskauer Rose LLP and a member of the Board of Citizens Union. He served as Corporation Counsel under Mayor Bloomberg from 2002 to 2013.