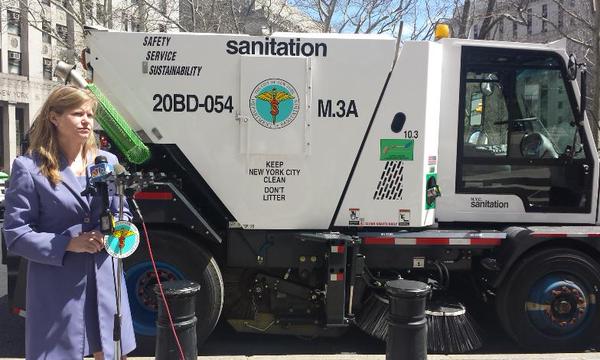 Kathryn Garcia (photo via the Department of Sanitation)

This could be the election that flips an old maxim on its head: we may soon find out that there are many different Democratic ways to pick up the trash.

While garbage probably won’t be among the top issues most voters care about when electing the next mayor of New York City, what better opportunity for a real conversation about how the city handles its trash and recycling than having the recently-departed sanitation commissioner among the candidates vying for the city’s top job.

Kathryn Garcia, who after six years in the post left her job as head of the city’s Department of Sanitation in September to run for mayor in this year’s election, is always ready to talk trash, and she recently previewed her vision for the future of how the city deals with its garbage in an interview with Gotham Gazette, while promising a full plan soon.

But Garcia’s not making it the centerpiece of her campaign. In the early going, she has been most focused on pitching her overall management credentials — she’s also been interim chair of the city’s public housing authority and the city’s emergency “food czar,” among other government roles — and her plans for the city’s recovery from COVID-19, dealing with climate change, and housing. Her initial campaign platform also touches on policing, transit, and education, and there are elements of waste management mentioned in her climate and resiliency plan.

And that’s the thing about handling the city’s incredible amount of trash: it’s an overlapping issue with not only climate, but public health and street safety, transit, use of public space, and more. It’s also an important part of the economy and city government spending, of course — the sanitation department accounts for roughly $1.7 billion in this year's municipal budget.

“New York City had the country's largest food scraps collection program before our budget was slashed; we will bring it back immediately,” she said of a budgeting decision by Mayor Bill de Blasio, the term-limited Democrat, and her plans if elected to replace him. “We can't get to zero waste without it. We will also open compost facilities in every borough, including on Rikers island, to increase in-city processing capacity.”

While de Blasio cut the city’s burgeoning curbside organics recycling pickup program in this fiscal year’s budget, the city does currently have roughly 100 drop-off composting sites across the five boroughs. The de Blasio administration has stalled in efforts to meet sweeping goals to reduce the city's millions of tons of annual waste output and significantly increase its recycling, as detailed in an exhaustive series by Politico New York published last year.

Garcia says that while she is interested in pursuing a variety of waste management reforms to restore or build on portions of her record she’s proud of, her main focus is “waste reduction.”

“We will do the analysis of pay as you throw that this administration refused to allow us to do,” she said. “And we will aggressively pursue EPR so that the product manufacturers are responsible for the end of life of those items.”

To encourage more recycling, which Garcia noted has recently been “up significantly” on “traditional materials,” she believes the city “should increase the fine” for not recycling recyclable materials. “It is $25 now,” she said. “That seems a little bit low in my mind to be an incentive not to be just throwing materials that could have value into the regular garbage. But the real next turn is organic waste.”

“I definitely want to mandate organics [recycling],” Garcia said in a separate video interview with Gotham Gazette and Manhattan Neighborhood Network that will air and be available online later this month. “I think it's time to do that. But we also need to make sure that we are getting it distributed completely around the city.”

“I want to take big leaps and the difference I will bring to the table is commitment and follow through,” she added when asked further questions by email. “It takes many months of consistency to build a new program and we need to offer services equitably for every single neighborhood.”

The other new program Garcia got moving while at sanitation, albeit much later than her critics would have liked, and says she wants to expand if elected mayor is “containerization,” or using sealed bins to collect trash and recycling instead of having mountains of full garbage bags all over city sidewalks. The containers can then be emptied by matching garbage trucks, cutting down not only on trash bags on sidewalks, but rat access, smell, and grueling lifting by sanitation workers. Containerization can also help free up sidewalk space and limit intrusions into bike lanes — containers can at times even help create protected bike lanes — and be especially helpful to those with strollers or mobility challenges.

Garcia helped launch the “clean curbs” pilot program last year, and though it was delayed by the covid crisis it is now moving ahead, starting with commercial landlords and business improvement districts that volunteer to participate and are accepted into the program, which comes with several requirements.

“So absolutely do we want to look at containerization particularly for commercial strips with residential above,” she said during the video interview when asked about getting all the bags of garbage off city sidewalks. “Because that we think could be effective. We need to do some more work with communities about whether or not we could containerize residential because the question is where is the container located. But in terms of new buildings they should all have containers in them and they should be inside the building so that it's not on the street and not creating, sort of, the walls of material.”

Garcia was referring to the passage of “rules to ensure all new large construction will require containerization,” for example, “in a loading dock.”

“I would love to take it in that direction,” she said when asked if widespread containerization of trash and recycling is her vision, “but I need to understand better if I actually thought it could work. And when we've looked at stuff from Europe, we have so much more volume that fitting that volume into a container that isn't enormous is really the tricky part of this.”

“But,” she stressed, “the key to getting garbage off our streets is to really approach the problem by focusing on waste reduction.”

The conversations did not touch on corner waste basket pick-up, another program within sanitation that recently saw significant budget cuts, some of which were restored amid widespread complaints of overflowing trash cans, that Garcia objected to and criticized in her resignation letter.

Garcia is also proud that during her tenure the de Blasio administration came to an agreement with the City Council on a new law to revamp the private trash hauling industry, rationalizing the market and cutting down on truck trips and therefore emissions.

For the public fleet, Garcia is pledging to move to electric sanitation trucks, as well as electric city buses and school buses.

Along with the pace and design of the initial containerization pilot, Garcia’s call to electrify the city’s garbage trucks is among the points where she has received some criticism. Questions have been raised as to why the city’s container pilot is requiring private entities to provide the bins instead of the city quickly investing in standardized containers and the trucks to match.

Darren Goldner, an organizer around climate and ecosocialism issues, argues that the city has moved far too slowly on containerization and that Garcia should now be proposing to move quickly toward the models seen across Europe while also “shifting from heavy trucks to light trucks” instead of focusing on electrifying the department fleet, which he called “greenwashing.”

The heavy trucks, Goldner says, are “terrible for the climate,” especially when paired with its current pick-up system instead of utilizing consolidated containerization.

Goldner and the rest of the Ecosocialist Working Group of the New York City Democratic Socialists of America is developing a 2021 platform around climate and related issues, including waste management, which they will be pushing candidates for city offices to adopt. Meanwhile, Garcia is working on her trash plan, which could help spur other candidates in the crowded mayoral field to take a substantive dumpster dive.