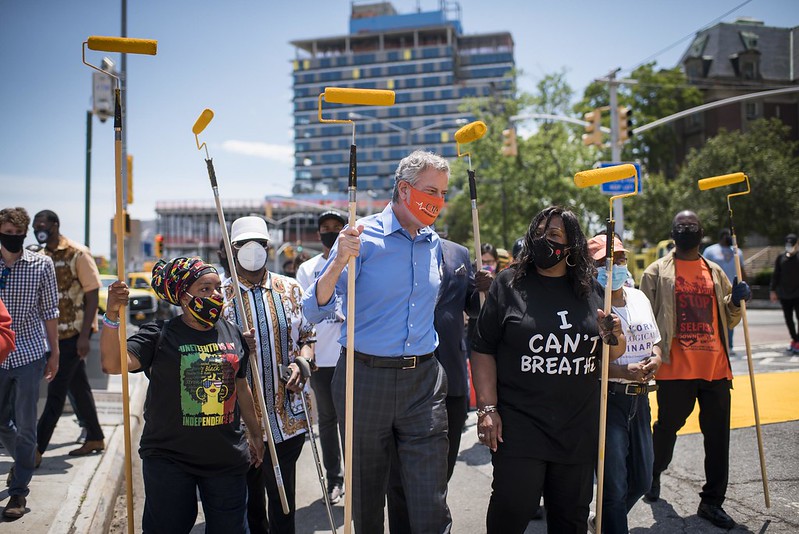 After weeks of mass demonstrations last June calling out police violence against Black people, New York city and state officials responded by passing and signing legislation for police reform and accountability that had seemed indefinitely stalled, ordering investigations into the policing of the protests themselves, and painting murals as a sign of government solidarity with its people.

One of the commitments made by New York City Mayor Bill de Blasio was to establish a commission to explore, in a comprehensive manner, the history of racial injustice in the city, a broader scope than any standalone reform with the promise by the mayor that it would lead to structural change and the redistribution of wealth and resources. But despite its fanfare (de Blasio held a press conference to announce it, then raised it more than a dozen times in remarks last summer) no public work has been done to advance the project in the seven months since it was proposed and, with less than a year left in office, the de Blasio administration says it is not ready to discuss it.

"By having a Racial Justice and Reconciliation Commission, we are saying officially, we want the truth to come out in the open, and then we want to work structurally to address the falsehoods and the pain and the injustice," de Blasio said at the announcement on June 19, Juneteenth, the day observed by some to commemorate a milestone in the formal end of slavery in the United States. (The same day, he signed an executive order making future Juneteenths a holiday for city employees but hasn't begun the necessary contract negotiations with the city labor unions.)

After more than three weeks of marches, set off by the killing of George Floyd by Minneopolis police on May 25, de Blasio announced the city would establish a commission to examine "the effects of structural and institutional racism in New York City," according to an official press release. In the days leading up to announcement, the mayor himself had been the target of a great deal of criticism, both for the ways the protests were policed and for his lack of progress in many areas of police reform, which had been a central commentent of his 2013 mayoral campaign.

The Racial Justice and Reconciliation Commission would look at racially-motivated violence against Black communities, as well as policies that contribute to and reinforce segregation "with an emphasis on housing, criminal justice, environmental racism and public health." It would be modeled on South Africa's Truth and Reconciliation Commission, the most famous of its kind, undertaken in the aftermath of Apartheid.

"The commission will examine how the disease of racism has infected all facets of our lives in New York City, from the disruption of families, to the seizure of land and other hard earned assets, from the parade of humiliations that declare we are worthless human beings to the systems that thwart the ability to accumulate wealth, racism has shaped our everyday practices and policies and is reflected in our behaviors and our norms," said First Lady Chirlane McCray, Co-Chair of the Task Force on Racial Equity and Inclusion, at the Juneteeth press briefing.

The commission was not only intended to identify the causes of institutional racism in New York but provide a specific road map to "tear it down in all agencies," de Blasio said at a press briefing two weeks later.

"I want to get to the material and tangible work of changing what we do in this city, redistributing wealth in this city, changing policies that are racist and discriminatory, changing structures that are inherently institutionally racist -- breaking them down," he told reporters at a separate briefing on June 23.

The administration provided few details on how the commission would be composed, who its members would be, who would appoint them, or what kind of budget it would have. Nor did the mayor define to what extent the commission would be independent and how much of a hand he would have in setting its scope and mandate. De Blasio has made no mention of the project in any of the transcripts of his public remarks after August 5.

The Mayor's Office declined to provide any information on the status of the commission in response to several Gotham Gazette inquiries.

"We were very excited when we heard about the proposal...and we're looking forward to see it happening," said Anna Myriam Roccatello, deputy executive director and director of programs at the International Center for Transitional Justice, which had some informal exchanges with the administration around the announcement. "We couldn't support more an initiative of that kind."

"Of course timing is very important because the sooner and the more promptly you demonstrate you want to address something of that significance the better it is, use momentum," Roccatello added. But doing it at a moment of high tensions and political posturing could have adverse effects on the process, she warned.

"Six months is not ideal but it's not so dramatic. It's the six months in context, meaning how much longer de Blasio has in office and how has he used these six months after such a loaded presentation," she said.

The Importance of Independence
Truth and reconciliation commissions are an element of some restorative justice models, often used when state-led or -sanctioned atrocities span policies and generations too numerous to adjudicate in court and which the state's legal system is not intended to address. They are a kind of government-run healing and record-setting process, meant to establish an officially-accepted historical account that comes from sources independent of the government and traditional channels of power, drawn from the testimony of people impacted and disserved by that history.

In the best of circumstances commissions can create powerful tools of fact and accountability that can serve as the basis of policy change. "It responds to a strong agitation from a significant part of the population that represents greivances and instances of exclusion and discrimination," Roccatello told Gotham Gazette in assessing de Blasio's proposal. "It sets the basis for having a participatory process where these issues are discussed, often with a view of addressing through policies -- policies that were demands by the movement itself."

There is always the risk of voices being excluded and cases being left out of the historical record. In New York City, the history of racial discrimination, violation, and neglect is well-documented but less frequently acknowledged in everyday policymaking or by the people who drive it.

Much depends on how data is selected, gathered, and analyzed, how demographic factors are prioritized, and how histories are brought to light -- all of which are choices that must be decided on by the commissioners.

According to Roccatello, the most important element of a truth and reconciliation commission is that it is allowed to be independent, both in its operations and to set its scope.

"In some cases representatives have put their political capital behind an initiative of that type with an ultimate political agenda," she told Gotham Gazette, adding, "and that could be legitimate as long as once the initiative takes off that you retreat and let the process be as independent and legitimate and participatory and inclusive as possible."

While it's not clear if de Blasio will in fact follow through on launching the commission, if he does, his involvement in its work will be closely scrutinized.

The mayor was a frequent target of criticism during the spring and summer Black Lives Matter demonstrations, not only for the NYPD's often aggressive response to predominantly peaceful protesters, but for having been in power during the killing of Eric Garner by police, slowing subsequent investigations into the officers responsible, and meting out limited and delayed discipline of them. He has also been criticized by reformers for having overseen a more than $1 billion increase in the NYPD budget over six years in office, the addition of thousands of members to the police force, and for promising to significantly alter police accountability in the city but showing limited results.

"This is the first time any city or state in America will actually examine our truth," de Blasio said last June. (There have indeed been other commissions of varying kinds established before and since de Blasio's announcement.)

Depending on the scope of the issues under examination, commissions are generally divided into multiple bureaus, with departments dedicated to collecting public and private testimony and investigating emblematic cases. Typically, there are interdisciplinary teams -- social scientists of various kinds, anthropologists, historians, economists -- analyzing the data, ostensibly with a lense toward the human impact of the violations. The work could look at how patterns of abjection developed and embedded themselves in institutions, as intimated by de Blasio in the case of the city's commission announcement.

New York City's Racial Justice and Reconciliation Commission was announced by de Blasio with First Lady Chirlane McCray, who has co-chaired the Task Force on Racial Equity and Inclusion with First Deputy Mayor J. Philip Thompson, since the task force was launched last spring to address racial disparities exacerbated by the pandemic.

Questions remain about how this process, with few successful models in the United States, would function in a city and country with its old and uniquely engrained forms of racism.

New York and the United States have a history of establishing task forces and commissions as a form of political deflection or to excuse the actions of white people. In other cases, government issued reports have been used to sanction practices and underwrite future policies that have had long-lasting and devastating effects on black communities.

Truth in the Present
Implicit in the city's lofty goal is the fact that achieving racial justice and reconciliation is not just an exercise in uncovering the original sins of racism. There are also real-time examples of official truth-seeking in ongoing calamities taking place in underserved communities. They are notably part of current efforts to curtail the disproportionate impact of the coronavirus on communities of color -- what advocates and some elected leaders have described in terms of unfolding atrocities in Black, Latino, and immigrant communities -- that have exacerbated long-standing disparities in health care, housing, and beyond.

At a recent City Council oversight hearing of the de Blasio administration's COVID-19 vaccine programs, Council Member Adrienne Adams, a Queens Democrat and co-chair of the Black, Latino, and Asian Caucus, read a statement from the caucus: "One of the most painful lessons drawn from this crisis was that a failure to provide timely reporting of racial demographic data at the onset of the pandemic resulted in a disproportionate number of dead black and brown New Yorkers that otherwise could have resulted in more aggressive mitigation measures employed in these communities.”

"If the federal government can establish a system that integrates key logistical aspects for delivering and administering vaccines and products to facilitate vaccinations, surely our city and state can do the same," Adams read before the committees and members of the administration, including Health Commissioner Dave Chokshi, "but such a system must be accompanied by a prompt disclosure of racial demographic data to help prevent the further loss of life and ensure that our historically neglected communities receive the desperately needed relief these vaccines provide."