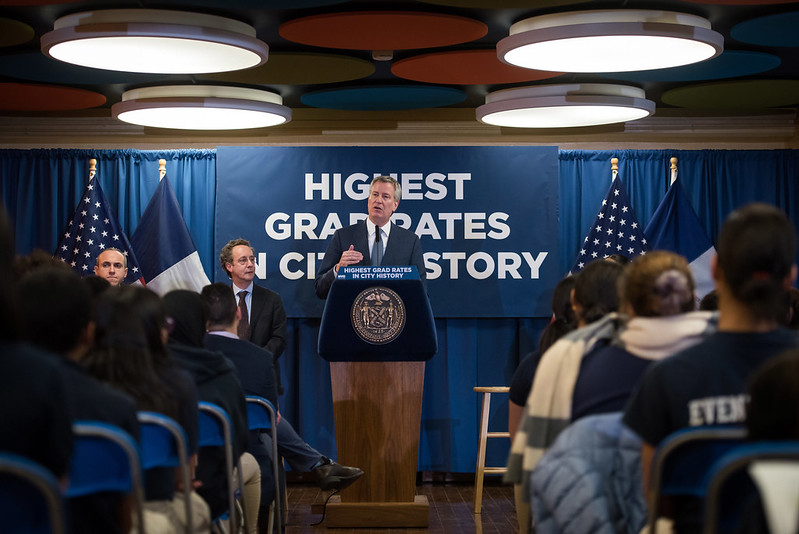 The pandemic's greatest health impact has fallen on older New Yorkers, but its economic effects are being deeply felt by the city's young adults.

The number of young people who are both out of school and jobless in New York City -- so-called "disconnected youth" -- has likely doubled since the coronavirus roiled the city beginning last spring, according to a new and long-awaited report from the city's Disconnected Youth Task Force.

The task force, which was created by City Council legislation in 2017 and appointed by Mayor de Blasio and Council Speaker Corey Johnson, found that while 1 in 8 New Yorkers between the ages of 16 and 24 were “disconnected” in 2018, the number is likely closer to 1 in 4 now. This means that about 25% of New Yorkers between 16 and 24 years old are out of work and out of school.

While this ‘disconnection’ had fallen throughout the previous decade, new problems have emerged and estimates suggest that job losses from the current economic crisis exceed the number of jobs created since the Great Recession in 2008. Disconnected youth in 2018 tended to be older and more educated than their 2010 counterparts, with close to three-quarters having at least a high school degree. But as they were a decade ago, disconnected young-adult New Yorkers are predominantly Black and Latino and are overrepresented in low-income areas with the Bronx accounting for the largest share of the five boroughs, according to the much-delayed report released last week.

The pandemic has exacerbated the problem: "Young adults who held jobs before COVID-19 are disproportionately likely to have fallen out of work in the months since then, as the economic sectors most likely to employ them—food service, hospitality, retail—have been among the hardest hit," wrote First Deputy Mayor J. Phillip Thompson, who chaired the task force, in an op-ed recapping the report, including new city plans to address these challenges.

The upended economy and the shift to remote work and school has created a parallel matriculation and drop-out problem, with thousands of New Yorkers leaving their college degrees unfinished or failing to enroll altogether after being accepted in 2020.

The experience of being out-of-school and out-of-work in adolescence leads to lower earnings, diminished homeownership rates, and worse health outcomes later in life, the report states.

The Disconnected Youth Task Force was intended to look at the myriad forces driving youth unemployment and academic disengagement and offer recommendations to inform city policy. The report -- originally due in 2018, a year before the de Blasio administration even formally empanelled the task force -- focuses on prevention and reengagement. Meaning, preventing youth from dropping out of school and career pathways, and reengaging those who do.

It recommends efforts to center young people in the emerging industries of the city's COVID-19 response and recovery, creating standards for career planning in schools and city programming, and consolidating responsibility for disconnected youth into a single city agency or position.

Along with the report released last week, Mayor Bill de Blasio announced a number of programs to engage and connect young people to school and job pathways. Among them is an initiative to support the enrollment of 5,000 recent high school graduates who have accepted offers from CUNY but never matriculated. The mayor also unveiled a number of apprenticeship and training programs through entities and agencies like CUNY, the Department of Youth and Community Development, and the Administration for Children's Services.

"The report of the Disconnected Youth Task Force provides policymakers the clearest picture yet of who our OSOW [out of school, out of work] young adults are, where we are delivering them effective services and where we must do better, and a comprehensive strategy to help every young New Yorker toward career success,” Thompson said in a statement.

The task force calls for the engagement of disconnected youth to be made a central component of the city's COVID-19 response, prioritizing them in contact tracing and other projects fueled by federal stimulus money.

It also recommends career readiness programs, like the mayor's 2019 CareerReady NYC initiative, be integrated and given more emphasis in middle school and high school.

The most overriding recommendation is perhaps the call to create a single office or position in city government responsible for work related to engaging disconnected youth, which would ameliorate current efforts described in the report as "disjointed and unfocused."

"The initiatives that the mayor announced line up in those three buckets" -- prevention, reengagement, and system-wide work -- "to some degree," said Stanley Richards, executive vice president of The Fortune Society and a member of the task force, in an interview with Gotham Gazette.

"The challenge for the task force and for this work going forward," Richards said, is "engaging non-profits and community-based organizations as part of the infrastructure," an element he said was embedded but not sufficiently discussed in the report.

He noted that many of the programs de Blasio announced with the report were within the city's jurisdiction and dealt with agencies under the direct influence of the mayor. The role of the city's network of nonprofit and community-based service providers "should be elevated on the same level in terms of initiatives, funding and support, and best practices and creativity that happen within a non-profit," he told Gotham Gazette.

"When we look at the adult education or young adult education community providers and the funding that's available, it was appalling," Richards said. "There should be a huge investment in that."

The Disconnected Youth Task Force is going to continue monitoring the city's progress toward the goals outlined in its report and the de Blasio administration plans to reconvene its members over the next couple of months, according to mayoral spokesperson Jose Bayona.

"As the City Council legislation passed in 2017 does not enumerate specific oversight powers and responsibilities, the Mayor's Office will continue to utilize the Task Force, both directly and as a vehicle to engage with other community stakeholders not among its membership, to effectively address issues related to Out-of-School/Out-of-Work young New Yorkers," Bayona said by email.

"This will include implementation and refinement of the initiatives announced on Jan. 19 as well as other possible measures to be developed, pending available resources," he added.

The administration did not say how much new city or private funding will go to the programs but Bayona noted that "the shift to remote programming has made some funds available."

"These new initiatives are being supported with a combination of leveraged funds from previous city investments and private dollars raised through the Mayor's Fund to Advance NYC," he said in response to Gotham Gazette inquiries.

The legislation, introduced by Brooklyn Council Member Mathieu Eugene, a Democrat who chaired the Council’s Committee on Youth Services at the time, mandated the task force issue its first report on March 1, 2018 and subsequent reports biennially until March 1, 2022, when a final report is due.

“As the prime sponsor of the legislation that called for the creation of the Disconnected YouthTask Force, I appreciate the committed efforts of multiple city agencies who are prepared to address this very important issue," Eugene wrote in a statement to Gotham Gazette. "The most important thing we can do for our youth is to not only engage them when they are young, but also to stay with them and provide a long-term support structure, so that we can prevent the patterns of behavior when they become disconnected from school and the work force."

Council Speaker Corey Johnson, a rank-and-file member when the legislation passed the Council and was signed by de Blasio, said through a spokesperson, "Speaker Johnson is glad this report is now finished. He looks forward to reviewing its contents in detail with Council Member Rose and their colleagues in the Council," referring to another sponsor of the legislation, Council Member Debi Rose, who is now the youth services committee chair.

For Richards, it is "important for our city legislators to know that some of these entrenched, systemic unjust systems and processes that some of our hardest hit communities experienced can't get fixed with a slogan or a bandaid," he said, adding, "we need to really look holistically at this."