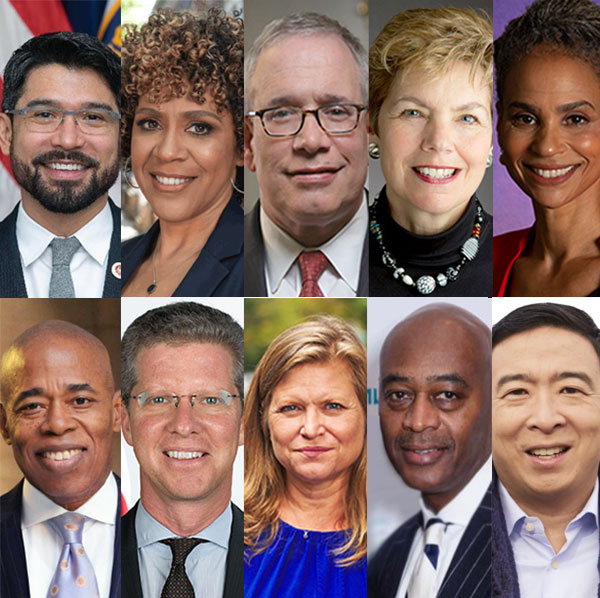 Eleven Democratic candidates for mayor appeared at a virtual forum on Tuesday focused on how they would shape health policy to be more equitable in New York City, especially amidst and in the wake of the coronavirus pandemic, which has brought the city’s health care infrastructure under considerable strain and has had a starkly unequal racial impact. The pandemic has thrust the issues of health-care infrastructure and equity to the forefront of the wide-open race to lead the city, which will be decided in the June primary and fall general election.

Black and Latino New Yorkers have been hospitalized and/or died from COVID-19 at rates twice that of white and Asian New Yorkers, according to city data, even though disparity in case rates is not nearly that high. The same goes for people living in “very high poverty” ZIP codes, who have been hospitalized or died at rates twice that of “low poverty” areas but have only marginally higher case rates. And the so-called outer boroughs all have higher rates of cases, hospitalizations, and deaths than Manhattan, which is home to several of the city’s wealthiest neighborhoods. Nearly 22,000 New York City residents are confirmed to have died from COVID-19, with an additional 5,000 having likely died from the disease.

The data shows the highly disparate health outcomes between the haves and the have-nots in the city, a fact which, as noted by the mayoral forum’s hosts, was true before the pandemic but has been exposed and exacerbated by it.

The forum was hosted by the Community Service Society, City & State, Community Voices Heard, and Make The Road New York, and was moderated by Sheryl Huggins Salomon of the NYU McSilver Institute for Poverty Policy and Research. Like some of the other forums, the large number of candidates led organizers to split the event in half, with five candidates appearing in the first session and six in the second.

The first hour of the forum occurred simultaneously with another mayoral candidate forum, hosted by the Council of School Supervisors and Administrators, the union representing administrative staff in city schools, and moderated by CUNY professor David Bloomfield. That forum focused on education. The two events are indicative of the pace and quantity of digital appearances that candidates are now making with under five months until the all-important Democratic primary.

"Our communities lack trust in the institutions that are supposed to be charged with caring for us,” said Morales, who is Afro-Latina. She and others noted that the city, during the pandemic, had failed to engage communities in meaningful ways, such as through “credible messengers” who are culturally competent and speak the language of those they’re engaging with, and said that those messengers are crucial in distributing the vaccine in marginalized communities.

Menchaca noted in particular that language access had posed a challenge in the city’s outreach efforts to combat the spread of the virus, and that the city had failed in efforts to engage in languages other than English.

“One of the things that we need to do is to ensure that all the languages are included as we bring good information, solid information, dispelling all the myths,” Menchaca said. He said that whenever he makes any public statements, he would assemble a team to translate it before the statement is released so there is no information lag for non-English speaking communities. “That one thing can be transformative.”

“We continue to run this city like it’s an English-speaking city,” Adams said. “Forty percent of Brooklynites speak a language other than English at home. We need to reach out to those credible messengers, similar to what we saw during the Census drive.” Menchaca had made a similar point about learning lessons from the 2020 Census drive for pandemic-era outreach.

Adams also said that the racial disparity in vaccinations should be made transparent by having every vaccination recorded and put in a city database so the data can be analyzed and released.

“Right now today, after repeated calls, we have yet to know who is actually vaccinated and the ethnicities,” Adams said. “That is wrong.”

Adams had announced on Monday that he would file a Freedom of Information Law request for the data. Mayor Bill de Blasio said at his daily briefing Wednesday that the city is planning to release the data in the coming days.

Several of the candidates pitched their experience as well as relationships with state and federal leaders as key to their success in various initiatives, such as getting adequate funding for the city’s public hospital system, New York City Health + Hospitals, which was deeply strained during the first wave of the pandemic last spring.

“The city is the majority of the economy of the state, and the fact that the governor and the mayor have not been on the same page has been very, very negative for the folks who live right here in the city,” Yang said. “We’ve all seen it, we’ve all felt it. I aim to be a friend and ally and sidekick, if necessary, to the governor to make this case to the feds.” Yang noted that he is “friends with his brother from CNN,” referring to Chris Cuomo, and said he is “very easy to get along with” and willing to give the governor all the credit. He also noted his relationships with federal officials made during his presidential run.

Donovan also frequently pitched his connections to federal officials from his years serving in the Obama administration, where he was Housing and Urban Development secretary and also budget director.

“With all due respect to their rolodexes, there’s no one [else] in this race who actually has worked side-by-side with these folks,” Donovan said.

Beyond using connections to gain more funding, the candidates presented other ideas to stabilize the finances of Health + Hospitals, the city’s sprawling public health system that includes 11 full hospitals and many other facilities. Donovan argued that the city should use its bargaining power to force private hospitals to share in the burden of caring for the city’s destitute, rather than forcing them into H+H and thus creating its financial instability.

Wiley made a similar argument, noting that the city’s status as the insurer of hundreds of thousands of people with the MetroPlus system and the large tax breaks that private hospitals receive mean the city has large bargaining power, not only to force private hospitals to share the burdens of caring for the most vulnerable, but also to prevent price gouging and enforce price transparency.

“There is price gouging, but we can make that transparent, we can make it public, we can call attention to it, and we can use collective bargaining power also to create more accountability in the system,” Wiley said.

Throughout the event, candidates pinned many of the issues of health inequity brought up by Huggins Salomon, such as the disparate impact of COVID-19 on low-income communities and communities of color and the financial difficulties of H+H, on the fact that low-income people often lack access to primary care, allowing health issues to stew undetected until requiring a more expensive emergency room visit, or, in the case of the pandemic, making death from the disease more likely.

“One of the things we saw in covid is that there were lots of underlying conditions that made you so much more vulnerable,” Garcia said. “If they are not managed, you put your life at risk. It also is more effective than them ending up in the emergency room.”

Stringer made a similar point.

Stringer pointed to the need for greater cooperation among agencies, and proposed merging the city’s health department and Health + Hospitals in order to prevent health disparities from manifesting in unequal outcomes in the inevitable next pandemic.

“We’ve got to get the Department of Health back in the game,” Stringer said. “We’ve got to merge H+H and DOHMH so that they are proactively looking at ways to prevent the next virus or the next health-care crisis. And that means we also have to not just invest in hospital or local clinic infrastructure, but we have to invest in personnel. The nurses, the doctors, how are we going to grow that health care in the communities.”

McGuire made a similar pitch, calling for incentives to build primary care clinics in poorly served outer borough neighborhoods. “I would incentivize the development of primary care facilities within the boroughs,” he said, “so that the people in the boroughs have a primary care physician.” He also supported increasing ER capacity in low-income neighborhoods by expanding H+H Express Care Centers, as a means of alleviating the shortage of beds seen during the pandemic at public hospitals serving marginalized communities.

Every candidate except for Sutton committed to creating a commissioner-level position, or even higher, in city government solely devoted to ensuring equity across the work of city agencies. Sutton said that she did not want to create an extra layer of bureaucracy, but that she herself would be the top advocate for equity in the administration.

“That would be one of my core values that I would lay out in a values manifesto, and would share with city government,” Sutton said. “And make sure that all of city government understands that these are the values of a Sutton administration.”

Donovan said he’d go further than a commissioner-level position, and instead create a position reporting directly to the mayor at City Hall that is responsible for creating equity across city agencies, rather than reporting to a deputy mayor. Yang said that he would go a “step further.”

“I think we need to amend the city charter to include addressing the racial health gap as a central mission of all of our agencies, especially the DOHMH,” Yang said. “It’s unconscionable the disparities we’re seeing.”

Morales and Wiley, while committing to create the position, noted that having a commissioner tasked with enforcing equity will accomplish nothing if the mayor herself isn’t committed to that push.

“Having been in the job,” Wiley said in apparent reference to her time at City Hall, “if the mayor doesn’t hold that work central, that lens and those principles central, does not know exactly how to tell city government ‘here’s the thing you’ve never done before that we’re gonna now do…,’ it doesn’t matter that you have that position filled.”