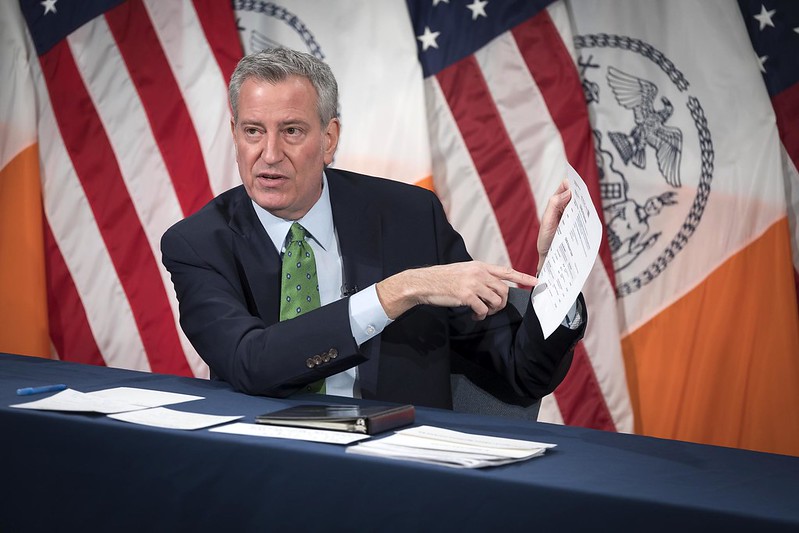 When Mayor Bill de Blasio delivered his State of the City speech last year with a plan to “save our city,” he couldn’t have imagined how prescient his choice of words would be. With less than a year left in office, the mayor now faces his most daunting challenge yet in attempting to usher in New York City’s revival from the devastation wreaked by the coronavirus pandemic. On Thursday, in his final State of the City address, he sought to address that task, releasing a broad recovery plan to jumpstart the economy, reform policing, reopen schools, redistribute wealth, combat the climate crisis, and restore and improve the health of New Yorkers.

In a roughly half hour-long, pre-taped evening broadcast, de Blasio unveiled his plan for "A Recovery For All Of Us," narrating its various aspects over a video montage portraying New York City's resilience through crises, past and present. "Let me tell you a story. A story about a city that bore the brunt of the COVID crisis. A city that was the epicenter, a city that was laid low but refused to be held down," he said. "Let me tell you a story about how things change, about the way we come back, about the way we build something better. Let me tell you a tale of a new city."

The mayor’s plan hinges on his promise to vaccinate 5 million New York City residents against the coronavirus by June. That Herculean task will involve 412 vaccination sites across the five boroughs and a new 2,000-strong Vaccine for All Corps to bolster the 3,900 existing vaccination workers in the city’s health system. De Blasio said the vaccination program will allow the entire city workforce to go back to the workplace by May. "Together, we will drive a recovery for all of us. To do it, we have to aim high," he said.

Though de Blasio has railed against income inequality since his first mayoral campaign in 2013, the pandemic has forced the ongoing and deep structural racial inequities of the city even further to the surface. In his speech, he proposed interconnected solutions. He made his Task Force on Racial Inclusion and Equity, created early during the pandemic, a permanent part of city government and he reiterated a pledge from last year to convene another Charter Revision Commission focused on racial justice and reconciliation. The Commission is the second created by de Blasio, and the third overall during his tenure, and it will do its work over the course of this year and next, stretching into the tenure of de Blasio’s successor, who will be elected this year.

The speech was full of lofty promises the likes of which the mayor has made and often failed to deliver on even during the best of times. De Blasio promised that the city would recover the number of jobs lost in the last year and even exceed the record-high employment from before the pandemic. The vaccination program alone would ensure 400,000 jobs are recovered by the end of this year, according to his plan, on top of the 100,000 that were saved through the Open Restaurants program that allowed outdoor dining.

Among his jobs recovery proposals are a Community Hiring First plan for construction jobs in low-income communities that have been hardest hiit by the pandemic. It’s estimated to lead to $1 billion in wages and benefits for those community residents in the first year alone. He also reiterated an earlier announcement that the $210-million New York City Acquisition Fund for building affordable housing would only fund projects under Minority- and Women-Owned Business Enterprises or those where a nonprofit developer owns a minimum stake of 51%. He is also announcing a new City Cleanup Corps which will temporarily hire 10,000 workers this year.

As he has always done, the mayor also called for increased taxes on the wealthy to fund the city’s recovery, which falls under the purview of the state (and federal) government. His plea could be successful this year, however. Though Governor Andrew Cuomo is loath to increase any taxes, his Democratic colleagues who lead the state Legislature have indicated that they are willing to do so, and Cuomo outlined a potential increase on top earners in his contingency-filled budget presentation earlier this month. A lot is riding on federal aid, which both Cuomo and de Blasio are seeking from the Biden administration and Democratic Congress.

A crucial aspect of the mayor’s recovery plan dealing with the conjoined public health and economic crises is his objective of making New York City the “public health capital of the world” with major investments in the life sciences industry. "[O]ur economy increasingly will be based on the notion that healthcare is a human right and the only way to build a strong society is to build a healthy society," he said. He announced that the city would create LifeSci Avenue, from the Pandemic Response Institute in Kips Bay which he announced in December up to East Harlem. In all, he is estimating that the growing industry would bring in $20 billion in federal funds and $10 billion in venture investment over a decade, creating 25,000 permanent jobs in labs and offices and another 26,000 construction jobs. Additionally, his plan would use federal funds to transition the Test and Trace Corps into a permanent 4,000-member Public Health Corps to work in hard-hit neighborhoods.

As the city’s small businesses continue to struggle to stay afloat, de Blasio offered them a lifeline as well. Besides pledging to reduce fines and red tape, the city will offer $50 million in rental assistance from federal stimulus funding to 17,000 businesses through the Small Business Recovery Tax Credit and will give low-interest loans of up to $100,000 to more than 2,000 small businesses through a $100 million city fund.

If the pandemic made one thing obvious it was that despite being the richest city in the richest country in the world, New York City has a woeful gap in internet access and affordability. The mayor has been promising to bridge that digital divide since his first year in office and has little to show for it. In his plan, he again promised progress, by creating new affordable broadband networks and building 5G infrastructure, particularly in underserved areas.

He also offered a vague solution to the city’s interminable homelessness crisis. His plan states that his administration will end long-term street homelessness by establishing 1,000 new Safe Haven beds this year, finally ending the cluster shelter program and siting the 90 new shelters he had promised in 2017.

Handling the schools system has been one of the more challenging aspects of the pandemic for de Blasio and he has promised that the city will safely reopen all schools this year as herd immunity is achieved through vaccination. "They've been the safest places in New York City and they will be again," he said of city schools. But he also aims to address the significant achievement gap that the pandemic created through a new plan that includes a high-quality digital curriculum for every school, a one-stop digital learning hub, expanding professional development, expanding “Parent University,” and providing trauma and mental health services to students.

He even presented some piecemeal fixes for the city’s historic school segregation problem, which he had vowed to fix but has moved slowly on over a number of years. According to the plan, the Department of Education will support five school districts as they implement District Diversity Plans, and eliminate district priorities for high school admissions and all other geographic priorities this year. He has also promised to implement a new system this year to identify gifted and talented students, another initiative that will then fall to his successor to really move.

With the backdrop of a major spike in shootings this last year as well as the national movement to reform and cut funding to police, the mayor walked a fine line on public safety and policing. He announced a new Joint Force to End Gun Violence and a “Top 100” strategy focused on 100 city blocks with the highest numbers of shootings. He also pledged to double the number of Cure Violence workers who focus on community-based solutions to prevent crime.

Evoking former Mayor David Dinkins, who established the Civilian Complaint Review Board (CCRB) in 1993 to investigate police misconduct, de Blasio promised to strengthen the CCRB. His “David Dinkins Plan” will broaden the agency’s authority, allowing it to initiate investigations on its own discretion among other measures. The plan will also consolidate the Commission to Combat Police Corruption and the NYPD Office of the Inspector General under the umbrella of the CCRB, effectively placing all police oversight under one agency. The plan will also institute a Patrol Guide Review Committee, to examine and update the NYPD’s patrol guide which governs police officers’ actions.

The mayor also hoped to bridge the trust gap between communities and police by allowing local Precinct Councils to interview potential candidates for Precinct Commander as well as perform yearly evaluations. Modeled on the CompStat crime tracking program, he announced that the NYPD will also begin disclosing metrics on customer and community service. "The new city we need to build has to be a city where everyone belongs. That new city we build has to be one where everyone feels fairness, and the decency that deserve," he said. "To do that we have to transform the relationship between our police and our communities. We have to change the culture of policing fundamentally."

Though it’s his last year in office, the mayor also pledged long-term measures aimed at combating the climate crisis including building new clean energy transmission connections and banning new fossil fuel connections. He also touted the divestment of the city’s pension funds from the fossil fuel industry, an announcement he made earlier this week with City Comptroller Scott Stringer.

He is also announcing a first-ever New York City Environmental Justice For All study, which will launch next month, to examine the impact of the climate crisis in low-income communities and communities of color and determine future policy. And he promised new public spaces and amenities this year like pedestrian plazas, open streets and green markets in 30 of the neighborhoods worst affected by the pandemic.

Part of his climate action plan involves expanding the Vision Zero program. That includes a new “Bridges for the People” plan to put bike lanes on the Brooklyn Bridge and Queensboro Bridge, five new bike boulevards across the city and making the Open Streets program permanent.