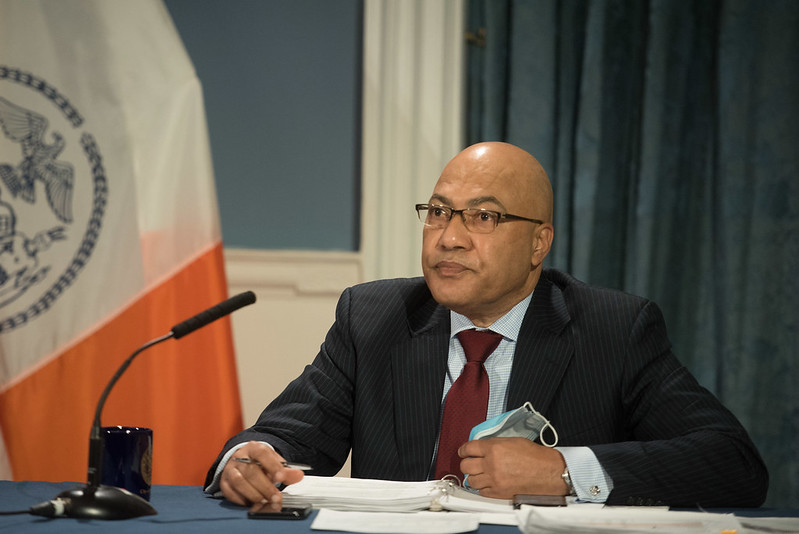 The New York City Council on Tuesday began its examination of Mayor Bill de Blasio’s $92.3 billion preliminary budget for the 2022 fiscal year, which begins July 1. The hearing was the first of many that will take place over the next few weeks as the Council digs into the mayor’s final budget plan of his eight-year tenure and as key questions remain about the city’s fiscal future.

The coronavirus pandemic stripped the city of billions in tax revenue, creating significant budget gaps for the next several fiscal years. The city’s fiscal picture has been fluid and uncertain, with billions of dollars of federal aid already flowing to the city and more expected, and a mix of lower-than-expected property tax revenue but higher-than-expected personal income tax revenue. Given the excellent overall economic pre-covid picture, the city had increased spending dramatically but did also have billions in reserves, however inefficient for the scale of the crisis that has unfolded.

The pandemic’s impact and the change of federal leadership in January forced the mayor to craft a cautious, worst-case scenario budget that didn’t take into account any additional federal stimulus funds that the city might receive under President Biden and a Democratic Congress, even though that is all but assured. De Blasio’s preliminary budget, released in January, predicts a big drop in tax revenues in the next fiscal year, draws deeply from the city’s reserves, relies on $1 billion in unspecified labor savings, and foresees recurring budget gaps of more than $4 billion in each of the next three fiscal years.

There also remains the risk of $2.4 billion in cuts and costs shifts across the current and next fiscal year potentially imposed by the state, which were not included in the mayor’s budget proposal but are among the points of contention as the state crafts its own crisis budget ahead of its April 1 deadline. As part of that picture, the mayor and others in the city are concerned that Governor Andrew Cuomo may further “supplant” federal funds meant for the city, meaning the state holds back hundreds of millions of dollars in aid to the city based on federal funds of the same amount flowing to the five boroughs -- this already occurred to the tune of $700 million, de Blasio said during his testimony at the state Legislature last month, and the governor is threatening another $800 million.

But, there has been some cause for optimism. The city expects to receive as much as $5.6 billion in federal aid through the $1.9 trillion American Rescue Plan Act currently being negotiated in Congress. “This budget isn’t nearly as grim as I thought it would be,” said City Council Speaker Corey Johnson, in his opening remarks at Tuesday’s hearing. With Democratic control over the federal government, “It looks like we’ll be getting the help we need,” he said.

Yet Johnson worried that the city is going to “just do the bare minimum” with federal funds, stressing the need to protect the social safety net and critical services for youth, seniors, and families. “I don’t want us to go back to normal. I want us to work toward a new, more equitable future,” he said.

As Council Member Daniel Dromm, chair of the Council’s finance committee, noted in his remarks at Tuesday’s hearing, the mayor’s budget also does not include about $730.5 million for City Council discretionary funding and to restore one-time cuts and fund programs added last year at the Council’s behest. It also underfunds items like expected NYPD overtime, special education, and student transportation, he said.

In his testimony, Jacques Jiha, director of the Mayor’s Office of Management and Budget, outlined the preliminary budget, which includes $885 million in new spending between the current and next fiscal year, $2 billion in savings across both years, and an increase in the ten-year capital strategy -- a separate budget plan that relies on bonding, though the debt service is paid for in the annual operating budget.

Jiha sounded a warning about the state cuts, which include $500 million slashed from the Health+Hospitals System across both fiscal years. “I want to emphasize that the state wants to cut resources in the midst of the pandemic from a hospital system that has led the fight to save lives and protect New Yorkers from COVID-19 since last Spring,” he said.

But he too was positive that federal funds will bolster the city and that an aggressive vaccination program will help boost the economy and, in turn, city revenue. “[W]e firmly believe New York City will recover faster than many people expect as social distancing requirements ease, the stimulus impacts are felt, and consumers unleash pent up  demand,” he said. “As this happens, workers will return to their offices, Broadway shows will sell out again, tourism will flourish, and hotels will fill with guests. This is a resilient city, and we will be  back better and stronger than before.”

Under questioning, Jiha could not provide specificity to the Council on several aspects of the preliminary budget proposal. For instance, since it did not weigh the amount of federal aid, he could not say where the city planned to spend potential dollars. “If there is no aid coming from the federal government, we'll continue to do what we've been doing, which is continual aggressive, savings programs,” he told Speaker Johnson. If aid does come through, which is more than likely, he said the administration would work with the Council on resource allocation. “At this point in time, we have not made any decision one way or another,” he said.

Johnson said the budget proposal seems “short-sighted” as he noted that it pulls $1.15 billion from city reserves, relies on labor savings that have yet to be outlined, and expects large budget gaps while the future of the economy seems uncertain. It does not identify enough efficiencies or long-term costs savings, he said, though the mayor has promised more agency belt-tightening. “I don't want us to be in a situation in a year or two where social safety net programs and essential services like trash pickup are on the chopping block again,” he said.

Jiha insisted that the administration is continually looking for savings but did not say how the labor savings would be achieved. Any savings program, he said, “should be implemented gradually. Otherwise, it could prove counterproductive.” He also said that if the city should have enough resources, after receiving federal aid, the administration would work to rebuild the depleted reserves.

As part of the mayor’s budget savings plan, the administration has instituted a headcount reduction program that mandates three employees must leave through attrition before one hire is made, with exceptions for positions related to safety, public health, uniformed workers, teachers, and revenue-generating jobs. After growing the city workforce by more than 30,000 workers until last year, de Blasio has reduced headcount by about 7,000 since January 2020.

But when pressed by Dromm, Jiha could not provide a breakdown of how the administration would achieve the nearly 5,000 employee reduction under that plan. “[W]e want to have as much flexibility as possible when we are dealing with agencies,” Jiha said. “We are still in the midst of a pandemic so we must be very nimble if we have to give some agency some leeway in case there is an emergency.”

Throughout the rest of the hearing, Council members sought answers on a broad array of issues. Council Member Helen Rosenthal, chair of the subcommittee on the capital budget, called for more transparency on which capital projects would resume this month, as announced by the mayor on Monday – Jiha promised to provide a list to the Council. Council Member Ben Kallos, chair of the contracts committee, pushed back against cuts to an indirect cost initiative for nonprofit human service providers and critiqued the use of outside consultants. Jiha said the administration would work to restore funds for those indirect costs if the city’s budget picture improves. He also said the administration is reviewing different agencies to assess where consultants are necessary, conceding that they can at times cost the city more money than a full-time employee.

Cautious optimism was the refrain of the day. Comptroller Scott Stringer, in his own testimony, said, “2021 began on a much more hopeful note than how we ended 2020, with a new president taking office, and vaccines for COVID-19 finally available. But the challenges of the past year aren’t behind us. Not by a long shot.”

He pointed to the $2.5 billion expected drop in property tax revenue next fiscal year, the mass closure of small businesses, high unemployment, and the city’s rocky vaccine rollout. “Just because we’ve closed the FY22 gap doesn’t mean we don’t have work to do to get our own fiscal house in order for the future,” he said, citing what he considers wasteful spending on homelessness, incarceration, and mental health programs without positive outcomes.

He urged the administration to use federal funds wisely. “Stimulus money is temporary. It will give us some help this year and next, maybe even a little the year after that. But after that, it is gone,” he said. “We need to strategically use these federal funds to relieve the suffering of New Yorkers, to jump-start our economic recovery and to lay the groundwork for a new, fairer economy.”

As is the case each year, the administration tends to be more conservative in its revenue forecasts. Ronnie Lowenstein, director of the Independent Budget Office, a nonpartisan city agency that is not under the mayor’s control, estimated to the Council that the city will end the current fiscal year with a $3.6 billion surplus, $258 million more than the administration’s expectations.

Lowenstein pointed to the positive developments at the federal level, including the next stimulus package and additional FEMA reimbursements announced by the Biden administration. But she also raised concerns about the unspecified labor savings, the status of federal funding for the MTA, cuts from Albany and the progression of the pandemic. “With these and a number of other critical variables, the city’s economic and fiscal future remains precarious,” she said.