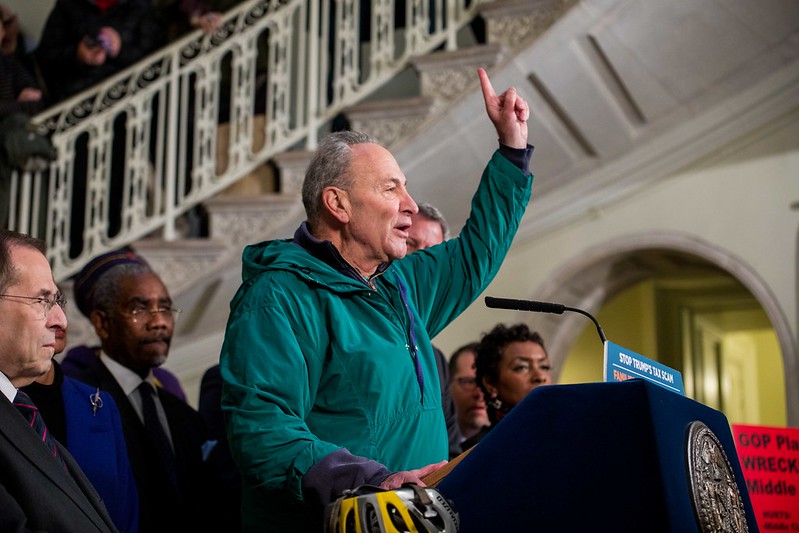 As Mayor Bill de Blasio celebrated the passage of President Joe Biden’s American Rescue Plan, which will deliver $6 billion in direct aid to New York City government and many additional billions to New Yorkers, U.S. Senator Chuck Schumer had more good tidings to offer as he promised that a massive infrastructure program is next on the agenda.

Biden has proposed a $2 trillion “Build Back Better” plan to invest in infrastructure and combat climate change. It’s reminiscent of FDR’s New Deal, investing in major public works projects and programs to create millions of well-paying jobs. That type of two-pronged approach has been proven to work and it will undoubtedly be invaluable to New York City, which has immense long-standing infrastructure needs and where unemployment remains high, at 11%, in the wake of the pandemic.

In his own preliminary budget plan outlined earlier this year, de Blasio proposed a $118.8 billion ten-year capital strategy, increasing planned spending from last year on infrastructure like schools, housing, roads, and more. Last week, the city announced that it would resume spending on $17 billion worth of projects that had been put on pause when the pandemic hit last year.

“We’ve got to get back to work building more school capacity in the communities that need it most. We’ve got to get back to work building and preserving affordable housing,” de Blasio said at the announcement, as he outlined other areas of investment. “Coastal resiliency, fighting climate change, protecting our communities. We're getting back to work on that. Improving our city streets, creating safety, Vision Zero, deepening our efforts there. And, of course, one of the places we've come to love even more during the pandemic, our parks, continuing our investments in our parks. So, that $17 billion is going to make a huge impact and help New York City come back strong.”

Schumer also looked to the future, on Thursday. “If we get a massive infrastructure bill, it can help build our mass transit, build out our mass transit, build out our highways,” Schumer said while making an appearance during de Blasio’s daily news briefing. He said the federal government would also give approval and funding for the Gateway program, featuring new tunnels between New York and New Jersey and which had been held up by the Trump administration. “Gateway is going to be coming soon too, and that'll create jobs that make sure that you can get under the tunnels from New Jersey to Manhattan, which helps our economy, our New York economy, our New York/New Jersey economy grow,” he said.

They declined to provide a specific list of projects.

As Schumer’s comments indicate, infrastructure needs in New York City extend beyond what city government has control over, such as through the Port Authority of New York and New Jersey and the Metropolitan Transportation Authority (MTA), a state-run authority that is partially funded by the city and where the mayor has some say about decisions.

It’s all welcome news to elected officials and urban experts who have spent months extolling the virtues of public works programs to revive New York City’s economy, though of course it has to come to fruition before anyone will celebrate.

There are several major infrastructure projects in New York that have been proposed and delayed, or even abandoned, that could benefit from federal funding such as Phase II of the Second Avenue Subway, the proposed Utica Avenue subway extension in Brooklyn, the Red Hook subway extension, a Triboro line using some existing rail lines to connect Brooklyn, Queens, and the Bronx, among others.

The Regional Plan Association, an urban policy think tank, recommended in a January report that the federal government should fund capital programs that have been laid out by local and state agencies in the tri-state area. Specifically, it pointed to the MTA, New Jersey Transit (NJT), the Port Authority of New York & New Jersey (PANYNJ), the City of New York, and the New York City Housing Authority (NYCHA). If all those plans are funded, RPA estimated that they would create about 263,000 jobs annually.

The latest stimulus package is delivering billions in aid for mass transit that will help New York – $6.5 billion for the MTA, $1.7 billion for Amtrak, and $418 million directly for New York airports  – but those funds are for operating expenses and agencies have deep capital needs. The MTA’s $54 billion capital plan for 2020-2024, for instance, is far from funded and is being reevaluated. As the RPA pointed out, about $37 billion worth of projects in that plan are “ready-to-go” and could be initiated if the federal government steps in with aid. (And separate from aid, the MTA needs the federal government’s approval to implement congestion pricing, a key planned source of dedicated capital funds revenue. The Biden administration, including former New York City transportation commissioner and MTA Board member Polly Trottenberg, appears receptive.)

The New York City Housing Authority is perhaps the worst off in terms of long-term disinvestment and crumbling, aging infrastructure. The authority’s capital needs have ballooned over the years, and its own estimate is that it would cost nearly $40 billion to bring NYCHA developments into a good state of repair. Those costs could increase to $68.5 billion by 2028 under the worst case scenario, according to NYCHA. At the federal level, several lawmakers have backed a Green New Deal for Public Housing – introduced by Vermont Senator Bernie Sanders and Rep. Alexandria Ocasio-Cortez of New York – which would invest $180 billion over ten years into repairing public housing developments and retrofitting them with green infrastructure.

New York City is also particularly vulnerable to the effects of climate change, with its waterfront communities at risk of being inundated by rising sea levels, its wastewater and sewage system unable to handle major storms and its energy infrastructure prone to failing during periods of peak demand.

“Few other cities would benefit more from a public works-style program to get the economy going and confront the climate crisis,” wrote Jonathan Bowles and Laird Gallagher of the Center for an Urban Future, in a February op-ed in Gotham Gazette. They argued that New York City officials should already be identifying shovel-ready projects to launch as a federal infrastructure program is on the horizon. CUF has compiled a list of potential projects, soliciting opinions from experts in coastal resilience, environmental justice, urban agriculture, renewable energy, and more. They include projects to retrofit infrastructure too make it sustainable and resilient, new renewable energy projects, urban forest expansion, consolidated organic waste collection, solar and battery storage, floating farms, raising streets in low-lying neighborhoods, and many others.

“For the city to make the most of Biden's "Build Back Better" infrastructure agenda, policymakers must act now to lay out federal funding plans for projects that can break ground this year and get New Yorkers working again,” they wrote. “With citywide unemployment still lingering above 10%, and sea levels and temperatures continuing to rise, we cannot afford to wait.”