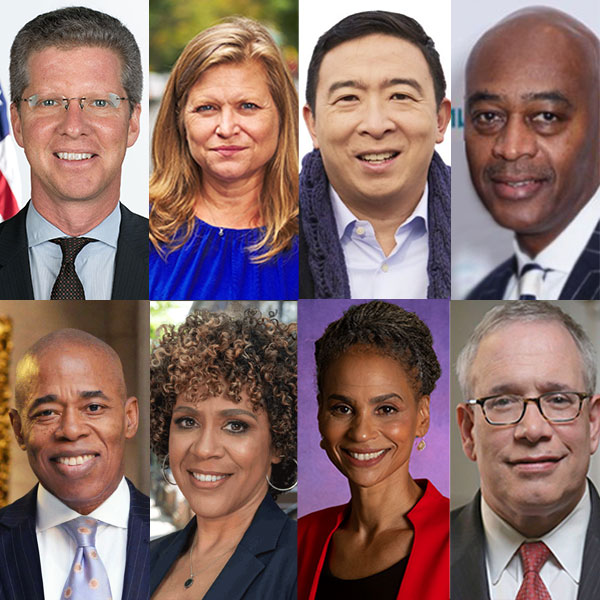 Given thresholds for participation, that first official, televised debate in the Democratic primary for mayor could feature roughly eight candidates. Participation in the initial mayoral debate will be based on imminent campaign finance filings with the Board. The first Republican primary debate is slated for May 26, and it’s currently unclear how many candidates will qualify.

The first of two official debates in the Democratic primary for comptroller – set for June 10 – could feature roughly seven candidates.

Though the city’s campaign finance law only requires two official debates before the election, there will be three for the Democratic primary in the mayor’s race because of the vast and competitive field. The third will be a “leading contenders” debate with objective criteria determined by the sponsor organizations.

After the first Republican debate on May 26, the second “leading contenders” debate will take place on June 6. The Democratic comptroller debates are set for June 10 and June 20.

Participation in the debates is mandatory for candidates who have opted in to the CFB’s public matching funds program, which matches small dollar donations at an 8-to-1 ratio for those taking part in its newer system (for this election candidates can opt in to the older system with different donation limits and matching formulas - most candidates for mayor are in the new system).

For candidates to qualify for the first debate, they have to meet a nonpartisan threshold of having raised and spent 2.5% of the spending limit for the race by the latest campaign finance filing deadline before the debate, which is March 15 for the primary. For the mayoral race, the threshold is $182,150 raised and spent, and for comptroller, it is $113,875. If candidates do not participate in the public funds program, they can still be invited to the debate by the sponsors if they meet the threshold. The threshold remains the same for the second debate but the deadline to meet it extends to May 21.

In the Democratic mayoral primary, there are more than 20 candidates who have filed with the Campaign Finance Board, but fewer than 10 are considered in the top tier and plausible qualifiers for the debates.

Five Democratic candidates who are participating in the public matching funds program have met the threshold for the first two debates according to their latest campaign finance filings from January. They include Comptroller Scott Stringer, Brooklyn Borough President Eric Adams, former counsel to the mayor Maya Wiley, former federal housing secretary Shaun Donovan, and former nonprofit executive Dianne Morales. Former sanitation commissioner Kathryn Garcia has yet to spend enough to meet the threshold, but will likely have done so by the March filing.

Former Citigroup executive Ray McGuire has far surpassed the necessary threshold but has opted out of the public funds program. He is likely to be invited by the sponsors.

The new filing will also be the first time that entrepreneur Andrew Yang files a detailed campaign finance disclosure. His campaign already claims to have raised more than $1 million and he is all but sure to qualify for the first two debates.

The “leading contenders” debate on June 16 – amid early voting and six days before primary day – could have fewer candidates, decided based on a higher fiscal threshold and additional “objective, nonpartisan criteria.” Candidates can qualify for the debate in one of three ways: they meet the fundraising threshold to qualify for receiving public funds, raising and spending $250,000 in matchable contributions from at least 1,000 city residents; they raise and spend at least $2.25 million by June 11; or they get 7% in the latest voter preference poll conducted by Marist prior to the debate.

Republican mayoral candidates will also file their first disclosures this week, so it remains unclear who has met the threshold so far. The major candidates include Sara Tirschwell, a former Wall Street executive and chief financial officer of Foundation House, a mental health nonprofit; Curtis Sliwa, founder of the Guardian Angels; and Fernando Mateo, head of the New York State Federation of Taxi Drivers and the United Bodegas of America. To qualify for the leading contenders debate, candidates must either meet the public funds threshold or raise and spend at least $2.25 million by June 11.

In the Democratic comptroller primary, six candidates seem likely to qualify for the first debate. Five appear to have met the threshold already, and the sixth is likely. They are Brooklyn City Council Member Brad Lander, Manhattan State Senator Brian Benjamin, Queens Assemblymember David Weprin, military veteran and entrepreneur Zach Iscol, and City Council Speaker Corey Johnson, the latest entrant into the race. Brooklyn State Senator Kevin Parker has raised enough funds but has not spent the needed amount to qualify as of the January filing, but that is likely not to be an issue based on the March filing.

Three other candidates are running serious campaigns but do not seem to be close to the threshold currently. They include finance executive Reshma Patel, compliance and investment expert Terri Liftin and business journalist Michelle Caruso-Cabrera.

As with the mayor’s race, the leading contenders could be whittled down with additional criteria for the final debate. Candidates can either meet the public funds threshold of $125,000 in matchable contributions from at least 500 donors; or raise and spend at least $1.125 million; or receive at least 7% in the latest Marist poll.

There currently seems to be no prospect of a Republican primary for comptroller.