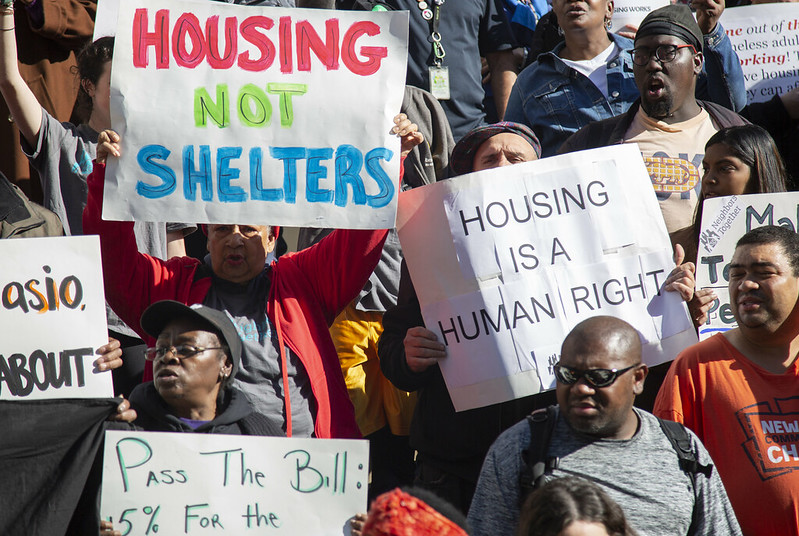 An advocacy group that has spent decades fighting for the “defunding of harmful systems” is issuing a call to action to New York City’s political class to reorient city government and pursue permanent solutions to longstanding issues of home lessness, substance use, mental health, criminalization, and incarceration.

VOCAL-NY, a statewide grassroots group, is preparing to unveil the “Caring & Compassionate New Deal For NYC,” which envisions reevaluating the city’s approach to intersecting crises of poverty and public health, abandoning what is sees as harmful policies and investing in proven, effective solutions. The platform is being released ahead of a Wednesday forum the group is hosting with leading Democratic candidates in this year’s election for New York City mayor, where those City Hall hopefuls will be pressed on their plans and the solutions the group is offering.

The platform, previewed by Gotham Gazette, draws inspiration from the Green New Deal, which aims to combat the existential threat of climate change by investing in renewable energy and tackling environmental injustice, while also making a slew of other investments and creating economic opportunity, especially for those who have often been left behind.

The centerpieces of the Caring & Compassionate New Deal For NYC include restructuring city government, permanently removing law enforcement, courts, and jails from the response to social ills, and a major reallocation of resources to social investments.

“We can't keep throwing small amounts of money to address massive issues that are life and death for the poorest and most vulnerable people in our city,” said Paulette Soltani, political director of VOCAL-NY, in a phone interview.

Soltani said city government needs to undergo a “total paradigm shift” away from the tools of policing and incarceration that have exacerbated societal crises rather than ameliorating them. The city spends $14 billion in operating expenses annually on law enforcement, courts, and corrections that serve to criminalize people experiencing homelessness, those suffering from mental health crises, and substance use disorders, she said.

The Caring & Compassionate New Deal is about “forcing the government, number one, to acknowledge the scale of problems and restructuring our government to be able to address those problems,” Soltani said.

Soltani and group’s report note that the city’s past and ongoing approaches have failed to produce results. For instance, while spending on homeless services has ballooned under Mayor Bill de Blasio, the number of homeless New Yorkers has reached a record high of about 78,000, up from 64,000 in 2012. In 2018, the city spent $1.8 billion on the Department of Homeless Services and $650 million on improving the shelter system, but only $147 million on housing for homeless people through the Department of Housing Preservation and Development.
The group’s framework is rooted in addressing systemic racism that pervades the city’s institutions and continues to harm Black and brown New Yorkers. It calls for ending policies that evolved from the War on Drugs, and seeks to place the people who have suffered at the center of solutions.

A major component of the platform is the divestment from current systems of the criminal legal system. VOCAL-NY was among the groups that championed the “defund the NYPD” movement last year, calling on de Blasio and the City Council to drastically reduce the $6 billion annual operating budget of the police department. VOCAL also vociferously opposed the mayor’s plan to build four new borough-based jails to replace the Rikers Island jail complex once it is closed.

In both cases, Soltani said, the city should have reinvested resources in social services, health care, and housing. “I think everybody knows across the board that something is not working in New York City,” she said. “We're at a fork in the road for New York City to either continue on the path of relying on ineffective and harmful tools, such as policing and incarceration or we can actually start investing in what people need, which is housing services and care.”

The platform includes several recommendations. They include creating a new deputy mayor to oversee the rapid development of emergency, supportive, and affordable housing; establishing non-police response to mental health calls, homelessness, and substance use; immediately defunding the Office of the Special Narcotics Prosecutor; reallocating funds from the NYPD, District Attorney offices, and Department of Correction into supportive health services, housing, and harm-reduction programs.

It calls for a historic investment in those needs and services to meet certain broad goals such as guaranteed housing, guaranteed access to health care including overdose prevention centers and harm reduction programs, creating a citywide emergency call system as an alternative to 911 for issues like homelessness and substance misuse, and building a social services workforce of the very people who have experienced homelessness or suffered from mental health crises and substance use.

Soltani acknowledged that the platform is likely to meet some resistance. New York’s elected officials often fall back on policing as a “knee-jerk reaction,” she said. For instance, after a mentally ill homeless man stabbed four people, killing two, on the A Train subway line in February, the mayor’s immediate response was to deploy 500 more police officers on subway platforms. “So the resistance may come from people who have long believed that policing is a solution. But I think more and more, we're at a point where we know that policing and incarceration are actually creating more harm and more negative consequences for the communities that need the most support,” she said.

Soltani also acknowledged that VOCAL-NY did not lay out a detailed blueprint or path for achieving its goals -- the paper laying out the framework says as much. “This is a real call to action that will require political courage,” she said of the broader policy outline and statement of priorities. “We will never begin to address these crises unless our city government and its agencies have acknowledged the problem.”