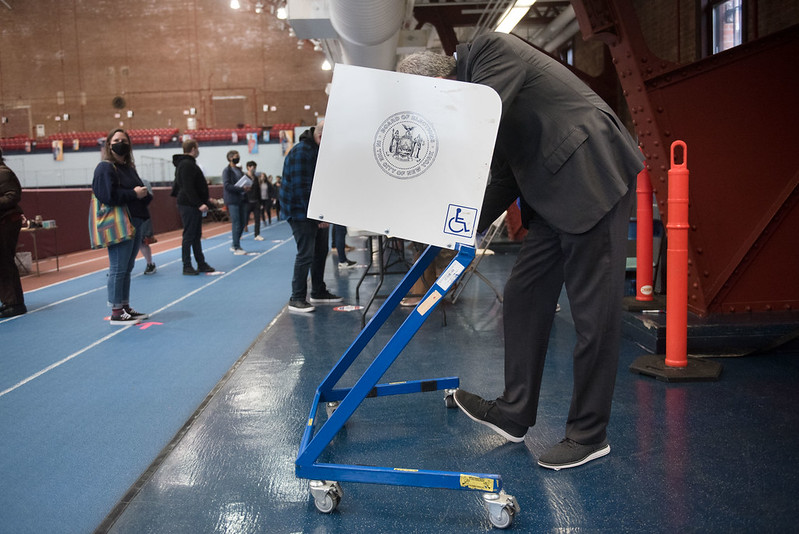 The 2020 general election saw an unprecedented number of New Yorkers cast their ballots, including through early voting, which was in place for the first time for a presidential election, and expanded absentee voting. As turnout jumped despite the coronavirus pandemic, there were again numerous instances of long lines at the polls, especially during the first several days of early voting when demand appeared to significantly outrun the number of available poll sites. Election administration in the city, run by the New York City Board of Elections, which is essentially a creature of the state, has been notoriously shoddy in recent election cycles and voters often wait hours to cast a vote and experience other snafus at poll sites.

A bill set to be introduced before the City Council on Thursday aims to solve these problems.

City Council Member Ben Kallos, a Manhattan Democrat, is introducing legislation to create a temporary poll-site task force that would examine measures to improve access to poll sites and to make them more efficient. The task force would be charged with studying the functioning of poll sites in the 2020 elections, the cost of running them, and the possible effects on the health of voters, and would recommend locations and the number of sites for future elections.

“I hate task force bills and I think that they're mostly useless, but this is the one time I think it's the only path forward,” Kallos said in a phone interview, reluctantly acknowledging that the Board of Elections is not really under the jurisdiction of city law despite the fact that it is funded in large part through the city budget.

Kallos recounted the experience of voters in the last election in his district on the Upper East Side, where the early voting site at Robert F. Wagner Middle School was assigned more than 118,000 voters, the most out of 88 early voting sites across the city, according to an analysis by the New York City Campaign Finance Board. More than 118,000 voters were assigned to that site, with many waiting for nearly six hours to cast their ball ots. That prompted Kallos to work with Borough President Gale Brewer to launch their own Manhattan-focused task force.

The citywide task force proposed in Kallos’ bill would be required to meet at least once a month and solicit testimony from experts and community members about future poll sites. It would have to submit a report to the mayor and City Council within nine months of the bill being passed into law. The report would be made public on the Board of Elections website ten days after submission.

Among the requirements for the report would be a list of poll sites from the 2020 general election where voters waited more than 30 minutes to cast their ballots, the reasons for waiting, and the cost of making sites temporarily or permanently compliant with the Americans with Disabilities Act.

It would also be required to include a list of poll sites that were considered for use in 2020 and which ones were accepted or rejected by the Board of Elections. The list would determine which buildings made their facilities available for use by the Board and which did not, and whether the city took any steps to revoke tax benefits awarded to those buildings, which Kallos noted is allowed by state election law.

That last measure is Kallos’ effort to pressure major cultural institutions to offer up their space to facilitate voting. “Every community board has nonprofit institutions, whether they're colleges, private schools, cultural institutions, or community centers that don't pay taxes to have their space, that may have million-dollar endowments, that aren't doing their fair share to facilitate democracy,” Kallos said. “We may be able to convince them to make their spaces available for 20 days a year for the sake of democracy.”

Under the bill, the task force would be dissolved six months after it submits its report.