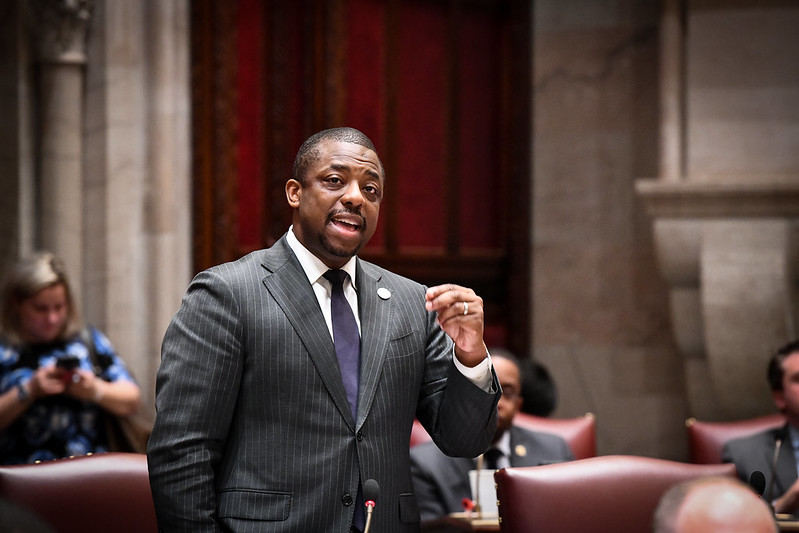 As the coronavirus ravaged New York City, it quickly became apparent that its effects were being felt disparately across the boroughs. Black and brown communities that have been the dumping ground for the city’s most-polluting infrastructure, where respiratory illnesses occur at higher rates, were more prone to a pandemic caused by a respiratory virus. The problem of environmental racism is not new, but State Senator Brian Benjamin is hoping that it is finally dire enough to be taken seriously and that, if elected the next New York City Comptroller, he can tackle the issue head on.

Benjamin, a Democrat from Upper Manhattan, is one of several candidates running in the June Demorcatic primary to replace term-limited Comptroller Scott Stringer. The comptroller is the city’s top fiscal officer and Benjamin is among those who believe they can use the position, as Stringer has done in some ways, to advance the cause of climate justice, encourage the city’s shift away from fossil fuels and towards renewable energy, while also promoting a more equitable distribution of city infrastructure. Benjamin is on Friday releasing a new climate and environmental justice plan as part of his campaign platform.

“I believe, quite frankly, either knowingly or unknowingly, it was environmental racism that has created some of these consequences that have hit my community the hardest,” said Benjamin, whose district includes Harlem, El Barrio, Washington Heights, Hamilton Heights, Morningside Heights, and the Upper West Side.

He traced those effects back to the history of discriminatory redlining after the Great Depression, which determined where public and private investments in housing were diverted, ignoring communities of color. Eight decades later, the nexus of those policies combined with others and the effects of climate change has meant disparate health outcomes for communities. Whiter neighborhoods have vastly more open and green space that can mitigate carbon emissions and high temperatures. The opposite is true for communities of color, where infrastructure like waste treatment plants are often concentrated. Those communities experience a “deadly urban heat island effect” during the summer, averaging temperatures degrees hotter than other neighborhoods, according to Benjamin’s plan which cites the state Department of Health’s Heat Vulnerability Index.

Benjamin says the issue is personal for him given that he and his wife are raising their daughter in Harlem, a historically redlined neighborhood. His comptroller campaign plan envisions a five-pronged approach that could be summed up as green energy, green audits, green investments, green transit, and a green land bank.

Benjamin wants to continue to use the comptroller’s advisory role to the city’s $240 billion pension system to divest from fossil fuel companies. Under Stringer, three of the five pension funds – the NYC Employees’ Retirement System, the NYC Teachers’ Retirement System, and the NYC Board of Education Retirement System – have already announced plans to divest $4 billion from fossil fuel holdings. Benjamin said he can ensure the city does that responsibly while also bringing in better returns for the funds, citing his experience having done that for Brown University where he sits on the Board of Trustees and leaning on his prior investment banking work.

“It's a huge deal and I look forward to building on that,” he said of the divestment announcement, “to not only make that happen, but then to show the police [pension fund] and fire [pension fund] that this actually could be good for them as well and we can actually move to full divestment and be investing in companies that meet the appropriate standards. I think that we can do good and do well at the same time.”

Continuing to follow in Stringer’s efforts at shareholder activism, Benjamin said if elected he would urge companies where the pension funds invest to pursue environment-friendly policies. “We need to think from a shareholder activist standpoint, as it relates to steering companies towards greener, fairer policies,” he said, “ensuring that we're not, on one hand, saying that we want to have a greener community and on the other hand, investing in companies that are doing the exact opposite.”

Besides acting as fiduciary to the pension system, the comptroller also oversees the city budget and examines the performance of city agencies. As comptroller, Benjamin said he would not only conduct fiscal reviews but also an equity audit and a three-part sustainability audit that would gauge agency actions on climate change, emergency preparedness, and innovation. Those audits, he said, would aim to ensure that agencies are meeting the goals of the city’s OneNYC2050 sustainability plan.

Benjamin has specific agencies in mind. He would measure the Department of Sanitation’s compliance with a recent law creating commercial waste zones; the MTA and New York City Transit’s progress on bus and bike lanes, while ensuring agencies are working toward electrifying their vehicle fleets. And he promised to push for the creation of more green energy infrastructure.

Those audits, which would also measure agencies’ emergency preparedness plans and the level of community engagement involved, would be made public.

A major aspect of Benjamin’s plan involves assessing the city’s mass transit system to guarantee both greener transportation alter natives but also equity in access. Communities in Southeast Queens, he noted for instance, are often “two-fare zones” where residents who cannot drive have to opt for two forms of public transit instead, often paying twice as much. Benjamin’s plan would use equity audits to ensure these communities are receiving the necessary infrastructure like express bus lanes and protected bike lanes. Better transit would also relieve some of the burden of density on Manhattan, he said. He also plans to track the distribution of electric vehicle charging stations and encourage city agencies to reduce vehicle use. “These are very rational, logical ideas,” he said.

Stringer has, over the years, repeatedly talked about more than 1,000 vacant city-owned lots across the boroughs, urging the de Blasio administration to use them to build affordable housing. The administration has disputed his assessment, saying a large proportion are not suitable for affordable housing while other lots are already in different stages of development.