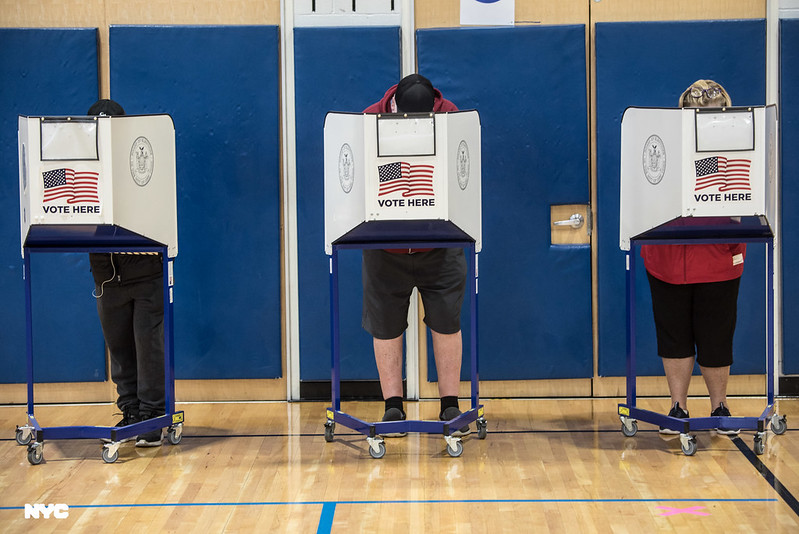 With just under three months until the conclusion of the June Democratic mayoral primary, which is likely to determine who will be the next mayor of New York City, half of likely Democratic voters remain undecided about their choice of candidate, according to a new poll released Wednesday.

Entrepreneur and former presidential candidate Andrew Yang continues to lead the crowded pack of candidates per the poll of 800 likely voters, which was conducted by phone March 15-18 by Fontas Advisors and Core Decision Analytics. It is the second of three “Pulse of the Primary” polls that the firms plan to release, gauging the Democratic primary electorate between January and June. Neither firm, which respectively do lobbying and data research, is affiliated with a mayoral campaign.

In the poll, a full 50% of those Democrats surveyed said they are undecided about which candidate they will choose. Yang received 16% of the vote, Brooklyn Borough President Eric Adams came in second with 10%, and former counsel to the mayor Maya Wiley was third with 6%. Comptroller Scott Stringer, the only citywide elected official in the race, was in fourth place with 5%. Former Citigroup executive Ray McGuire received 4% while three other candidates – former federal housing secretary Shaun Donovan, former city sanitation commissioner Kathryn Garcia, and former nonprofit executive Dianne Morales – all tied at 2%. No other candidates were named in the poll; the eight included candidates are generally considered the ‘top tier’ and are, with wide variations, the top fundraisers in the race, which includes another nearly 20 Democratic candidates who have filed to run.

Though Yang’s vote share fell compared to the last poll – which was conducted January 20-25 and released February 10, and saw him receiving 28% – he remains the most well-known candidate in the race with 85% of those polled this month saying they had heard of him. In comparison, 64% said they had heard of Stringer and 62% said the same of Adams. The February poll gave voters names and brief titles or descriptions of the candidates while the March poll prompted voters with names only, which could be part of why the undecided share increased from 19% to 50% between the two polls. Other possible reasons include voters paying more attention to the race and therefore learning more about various candidates. The prior poll was also conducted through online interviews as opposed to phone interviews for the current poll.

Of the other candidates, Donovan, Wiley, and McGuire all made gains in name recognition since January.

“Though the candidates may have been campaigning for several months, our survey shows that voters are only now starting to tune in to the mayor’s race,” said Adam Rosenblatt, President of CODA, in a statement. “With less than one hundred days until the Democratic primary, the majority of likely voters are undecided, unfamiliar with most candidates, and also largely unaware of the new ranked choice process.”

This year’s primary will be the first ever carried out through ranked-choice voting, which allows voters to rank up to five candidates in order of preference and eliminates the need for runoffs in citywide races where they were previously in play, while also offering other benefits and concerns. But, as Rosenblatt indicated, those surveyed indicated they had limited knowledge of the new system; 15% said they had heard, read or seen “a lot” about RCV, while 23% responded “some” to the question and 19% said “a little”; 41% said they had heard “nothing at all” about the new voting system.

The poll found that undecided voters were less familiar with the candidates and more likely to be women – 68% of the undecideds – though they showed a diversity of age, race, and borough of residence more closely matching the sample and expected electorate.

In a list of 11 total issues, the rollout of vaccines and the control of the COVID-19 pandemic was the top one for voters, with 91% saying it is extremely or very important. Improving public education was next, with 88% saying the same, perhaps indicative of the severe challenges with remote learning and school closures and reopenings amid the pandemic. The next issues in line were job creation, homelessness, healthcare, and crime and safety.

Despite the dire state of affairs caused by the pandemic, more than half of voters expressed optimism for the future of the city. Just over half, 52%, said the city is “headed in the right direction” while 34% said it was “headed down the wrong track”; the rest were unsure. Looking ahead one year to March 2022, 58% in total said things would be “back to the way they were” or “better than they were before the pandemic.” Only 9% said things would be worse.

“With vaccinations underway and restrictions slowly being lifted, New Yorkers appear to see hope at the end of the Covid tunnel with a solid majority of voters believing that NYC will bounce back the same or better than pre-pandemic times,” said George Fontas, Founder and CEO of Fontas Advisors, in a statement. “It’s not surprising to learn that recovering from the pandemic is the highest priority to voters, though it’s extraordinary to see public education far outpaces other issues, reiterating that a functioning in-person school system is mandatory to return the City to normalcy.”