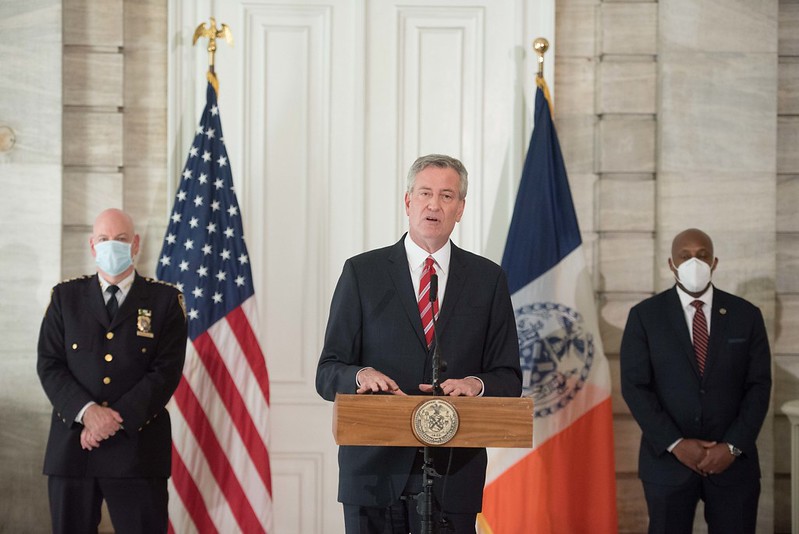 Mayor Bill de Blasio renew ed unproven claims this week that a slowdown in court proceedings has contributed to an increase in shootings and murders in New York City. In multiple appearances since Monday when pressed on the ongoing gun violence surge, the mayor said the state court system was "overwhelmed" and "not functioning" and that cases have gone unadjudicated, removing essential deterrents and punishments for crimes and exposing the public to dangerous individuals.

The statements echo dubious assertions made by de Blasio and Police Commissioner Dermot Shea last summer amidst protests against racist policing, a spike in gun violence, and the city's nascent pandemic reopening. Those statements were refuted at the time by state court administrators, prosecutors, and defense attorneys. Court officials -- who say courtrooms are now open after operating virtually for much of the last year -- are again calling de Blasio's accusations baseless.

"I can tell you that there are people out right now who would normally be going through a trial process and if that trial meant that they had to have a consequence they would be receiving that consequence," the mayor said in an interview Monday on NY1 with Inside City Hall anchor Errol Louis. "If there is no pathway to a consequence, I think it is one of the factors that's contributed to why we're having this uptick in violence."

The mayor's remarks were called "uninformed," "gratuitous," and "unjustified" by Lucian Chalfen, a spokesperson for the Office of Court Administration, the state agency operating New York's court system. Chalfen defended the system's progress during the pandemic, saying, "While there is clearly a decline in activity - 'closed' or no activity couldn’t be farther from the truth.”

Gun violence and murder have been a second plague of the coronavirus pandemic since last spring. Shootings were on the rise at the beginning of 2020, and after leveling-off briefly in March as the city went into a lockdown, rose sharply in May, reaching a height of 74 shootings in one week in early July, according to the NYPD's crime tracker, CompStat. By the end of the year, the police department recorded 1,531 shootings and 462 murders, increases of 97% and 45%, respectively, compared to 2019.

Shooting incidents so far in 2021 have been up year-over-year, with 77 taking place in February 2021 compared with 44 in February 2020 (a 75% increase). March numbers are difficult to compare given it was the month last year that Governor Andrew Cuomo and de Blasio declared states of emergency in response to the coronavirus outbreak.

The mayor has said factors like mass unemployment and the closure of much of public life, including elements of the justice system, have created "a perfect storm" for crime. Shea has gone further, blaming statewide bail reforms and a reduction in the city's jail population, policies de Blasio has supported and he has not blamed for the increase in gun violence. There is limited evidence that bail reform or pandemic-related releases of incarcerated individuals have contributed to the increase in shootings and murders.

One area of agreement between de Blasio and his police commissioner is that a slowdown in court activity has delayed proceedings for many people accused of serious crimes and that this has meant more violent people on city streets.

"Our court system is not functioning right now and that is making it bad for everyone. And we need to bring our courts back," de Blasio told reporters at a press briefing Monday morning, when asked about what the city is doing to stop gun violence, saying the state must make changes to get court workers vaccinated more quickly and open in-person proceedings up more fully. "The central problem right now is that there's not a functioning justice system that allows everything else to work and we need to bring that back."

"The Mayor should remember that the way shifting blame works is to be cognizant as to how another branch of government is actually functioning before doing so," Chalfen of the Office of Court Administration wrote by email.

Court activity has slowed during the pandemic but whether it has meaningfully contributed to gun violence is highly questionable.

Bill Neidhardt, a spokesperson for de Blasio, told Gotham Gazette the mayor's court-closure assertions are based on figures showing the number of individuals in jail on gun charges in the first three months of 2021 is double 2020 rates — but it’s unclear how that would then contribute to an increase in gun violence outside the jails and neither the mayor nor Neidhardt has explained. According to Neidhardt, the number of indictments for "serious crime" that have been open for more than a year was around 5,200, more than double the 2,000 from the same time last year. "Courts have all but stopped sentencing people for low-level city sentences—only one so far in 2021," he wrote in an email, though gun crimes are almost always felonies, not “low-level.”

In February, the daily number of people in jail with violent felony charges rose by over 700 to roughly 3,500, according to data from the Mayor's Office of Criminal Justice website.

According to de Blasio, gun arrests are currently the highest they have been in 25 years. "[Police] are out there doing the work, and every time there's an arrest, it makes an impact. Now, we need a court system that does something about those arrests," he said at a Wednesday press briefing. The mayor did not provide data when asked by reporters for statistics to support his claims. Before the pandemic outbreak in New York, the city jails held about 5,200 detainees, a number that quickly dropped to about 3,900 given releases based on covid concerns. That census then gradually increased to about 4,800 by the end of the year, and was around 5,400 recently.

"This tired trope of his has never been true and gets further from reality on a daily basis," said Alice Fontier, managing director of Neighborhood Defender Service in Harlem, in response to the mayor's comments. "People are being arrested and bail is being set, if there is a lack of functionality in the Courts, it is to the detriment of the people who require speedy access to justice."

"There is no meaningful connection between the functionality of the Courts and crime rates," she wrote in an email. Fontier believes the courts are functioning: "My office represents only 11% of the people in Manhattan, and we alone have 73 cases scheduled today. Trials, although limited, have restarted. Attorneys and advocates have been working in the Courts every day throughout this pandemic, and continue to do so," Fontier said.

According to data provided by OCA, case filings in criminal proceedings in January and February 2021 dropped 38% statewide from the year prior and civil filings fell 45%. In New York City, the slowdown was greater for felony cases -- which include almost all gun charges -- than for misdemeanors, with felony filings dropping 38% compared with a misdemeanor dropoff of 17%.

Bail is still set for nearly all gun charges, those crimes were not part of the bail reforms in 2019 that limited the types of charges under which defendants could be released on bail. A new option to post partially-secured bail, which was expedited by more recent changes to the bail law that went into effect this year, could make it easier for defendants to be released even when bail is set for gun charges.

In the first quarter of 2021, the backlog of unadjudicated felony cases with indictments in New York City was just under 11,000, according to OCA, compared with 9,030 the year prior. (The first-quarter backlog of misdemeanors is roughly 24,800 versus 20,260 last year.) The backlog could mean low-level gun offenses, like possession, with limited evidence don't come with pre-trial jail time, but not for serious cases, like shooting and murder. There were an additional 15,730 felony charges that did not have indictments during the first quarter of 2021 because of a decrease in the number of grand juries. Defendants in those cases faced a truncated preliminary hearing with a judge where bail was likely set, which for many who are unable to pay leads to jail time.

Last spring through July 2020, grand juries had been suspended by executive order to reduce the risk of transmitting the virus in person. The suspension was a focal point for de Blasio during his "perfect storm" proclamations last summer, even though it likely contributed to more accused individuals sitting in jail pre-trial, according to defense attorneys and court experts. According to OCA, there were approximately 17 sitting grand juries in New York City on Tuesday.

But grand jury sittings are still not up to pre-pandemic levels, which could hamper longer-term investigations that require indictments before an arrest, like the kinds used to take down gangs and organized crime. Because those grand jury proceedings are secret, there is no public information on how many of these cases have no indictment.

In-person jury trials resumed in late March and 130 have either been scheduled or taken place, Chalfen wrote. New York City Criminal Court also arraigns between 175 and 250 defendants a day virtually in remote hearings. Of those, between 3 and 12 are on illegal gun possession charges, roughly three-quarters of which have bail set. Non-jury criminal and civil proceedings have continued remotely for much of the pandemic.

"The reality is that everyone in the judiciary, judges, non-judicial staff and court officers have really stepped up this past year and that is why uninformed gratuitous remarks like the Mayors are unjustified," he wrote.

De Blasio took issue with Chalfen's statements to press at a briefing Wednesday morning. "Public relations people will offer their quotes and that's normal, but let's be honest: there's been very few trials for the last year," the mayor told reporters.