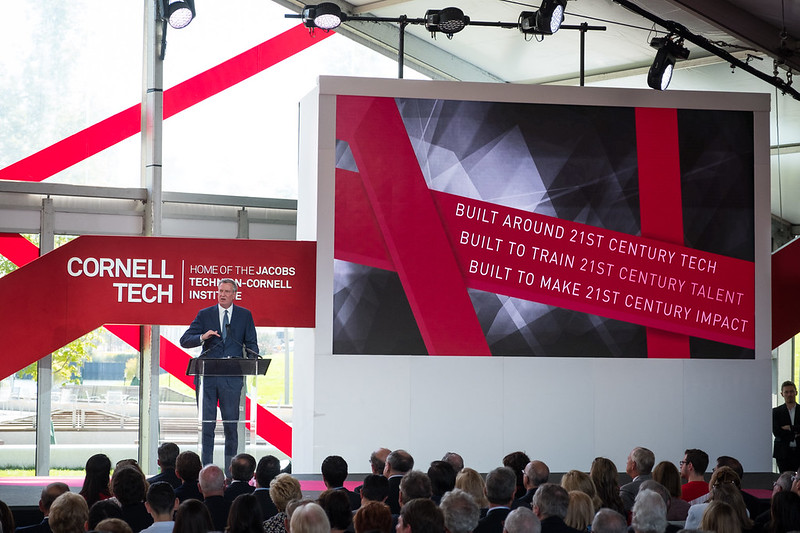 A report released Wednesday provides technological solutions for some of the city’s myriad problems and examines the barriers to their adoption, with the hope of provoking intense debate about urban technology in this year’s municipal election.

The 124-page report, titled “Rebooting NYC: An Urban Tech Agenda for the Next Administration,” is a first draft released by Cornell Tech’s Urban Tech Hub, part of the Jacobs Technion-Cornell Institute located on Roosevelt Island. It provides the beginnings of a roadmap for utilizing existing technology to improve the city’s provision of services, optimizing the built environment, and expanding New Yorkers’ engagement in civic life, among other goals. The report was created after interviews with more than 100 technology and civic experts from New York and around the world, according to its publishers.

Among the recommendations are approving new data privacy regulations, creating a Deputy Mayor for Technology, establishing an independent Emerging Technology Advisory Panel, and a Broadband Development Corporation, among several others.

This year’s New York City election is one of the most consequential in decades, as the city attempts to end and recover from the COVID-19 pandemic, which has cost tens of thousands of lives and hundreds of thousands of jobs while exposing and exacerbating long-standing problems. The next mayor, class of City Council members, and other elected officials will be tasked with leading the city’s recovery from the pandemic, ensuring equitable outcomes where there have been disproportionately unequal impacts. The Tech Hub’s report aims to aid those solutions, while also addressing some of the more anodyne functions of city government that can be improved with technology.

“This should really begin to inform a conversation around the role of technology in the city,” said Michael Samuelian, director of the Urban Tech Hub and formerly President and CEO of the Trust for Governors Island, among other roles in and out of government, in a phone interview. “I think there’s a lot of talk about tech and tech-enabled recovery but not a lot of details. So I think this provides the details...We're doing the research, we're doing the homework, we're kind of doing the hard work when it comes to what are the technologies that are available for the next administration to really take up.”

The report has five main areas of focus: protecting privacy; ensuring equal participation in the digital economy; improving the management of urban systems; easing access to government services; and anticipating the effect and implementation of future technology. It is, by no means, exhaustive and leaves open broad areas for discussion and feedback. “We didn't try to attack every problem. Tech isn’t the solution for everything,” said Samuelian.

But he noted that the next steps in the effort will expand the scope of the report. The Tech Hub has reached out to mayoral candidates to brief them on the report’s findings and will spend the next few months soliciting responses from civic tech groups, nonprofits, community organizations, and more before issuing a final report by the end of the summer.

The report emphasizes that privacy and participation are the “necessary foundations” for the mass use of urban technology tools. It proposes a new law to regulate how city agencies (particularly the NYPD) collect and share data, and transparency and oversight measures for both the public and private sectors. It also addresses technology procurement by the city, proposing to consolidate technology-focused efforts under a new deputy mayor and a digital services team.

One of the more glaring issues that was brought to light by the pandemic is the digital divide across the city, with about 18% of New Yorkers lacking access to either a home or mobile internet connection. The Hub’s report proposes that the mayor and City Council establish a new Broadband Development Corporation to oversee the building of a citywide open-access fiber network. It also notes the need to address issues with electronic payments for those without bank account access and fixing difficulties in package deliveries.

Among the more immediate solutions proposed by the Hub are measures to improve how New Yorkers experience the built environment around them, particularly city streets and sidewalks. The report proposed technological remedies to traffic enforcement and management, expanding bike lanes to create wider New Mobility Lanes to accommodate new forms of mobility such as e-scooters, modernizing the design and construction industry, and testing the use of drones for building inspections to reduce the number of sidewalk sheds, also known as scaffolding.

One of the chief goals of the report is to ensure that New Yorkers have easier access to city services and can participate in local decision-making. It proposes creating secure “personal data lockers” that would store information about eligibility for city benefits, helping the city to streamline applications across agencies and allowing people to track their benefits — similar to what some mayoral candidates have been proposing. The report encourages the mayor and City Council to advocate for continuing virtual community board meetings (which would require a change in state law) and to provide community boards with technological support such as standardized webcasting kits, automatic transcription, captioning and translation services.

The report doesn’t just examine current problems, it is also forward looking. It urges the mayor to appoint an external body to develop regulations for emerging technologies and calls on the City Council to institute a permanent, independent Emerging Technology Advisory Panel that would issue reports every two years on those technologies and their potential impacts on the city.