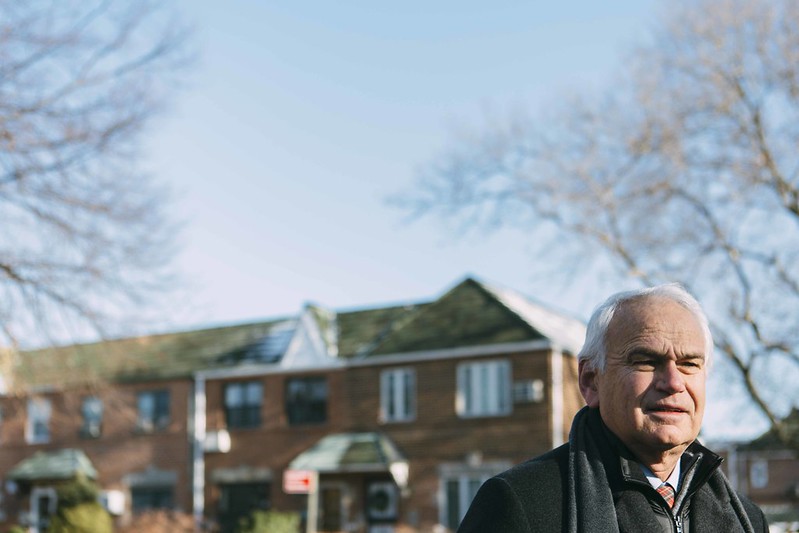 City Council Member Bob Holden, a first-term Democrat from Queens, is known for being one of the Council’s more moderate-to-conservative members, having won his seat running on the Republican ballot line in 2017 after losing the Democratic primary to the incumbent at the time. Especially in a legislative body that includes just three Republicans in 51 seats, Holden regularly takes among the more right-leaning positions on a number of issues, particularly policing, whether in his district or on a citywide basis.

As he runs for reelection this year, Holden faces a primary challenge from Juan Ardila, a young progressive who has criticized Holden’s legislative record and his political leanings. Competing in one of few one-on-one primary races in this city election year with dozens of contests featuring long lists of candidates, the two candidates represent different generations, backgrounds, and ideologies, and they accuse each other of being too out of touch with key cross-sections of the district. As the incumbent rallies some of his colleagues and other high-profile supports to his side, the challenger has been backed by a number of left-leaning officials and groups.

Holden, one of only about 10 Council members eligible to run for reelection this year due to term-limit cycles, was a civic leader for decades before being elected in 2017 to represent District 30, which encompasses Glendale, Maspeth, Middle Village, Ridgewood, Woodhaven, and Woodside. A registered Democrat, Holden first ran unsuccessfully in that primary against then-Council Member Elizabeth Crowley, but went on to narrowly defeat her – by only 137 votes – in the general election, running on the Republican, Conservative, and Reform Party lines, as well on the “Dump De Blasio” line that he created. His path to victory that year involved his ardent protests against the opening of a homeless shelter in his district, while also painting Crowley as soft on crime.

In his first term, Holden has followed through on that campaign. He has been a constant critic of the de Blasio administration and has regularly voted in the minority with a handful of fellow Democrats and the three Republican Council Members. He has, for instance, defended the NYPD against efforts to cut its funding and increase oversight – he was one of the few members who voted against the city budget last year because of reductions to the police budget. He introduced a bill to repeal the Council’s law criminalizing the use of chokeholds by police. He is one of the few members who supported Immigration and Customs Enforcement (ICE) when the federal agency came under fire for targeting undocumented immigrants in the city under the Trump administration. He is opposed to the closure of the Rikers Island jail complex.

Holden hasn’t been the prime mover on much legislation. He has introduced 72 bills, and just five have been passed into law, related to waiving fines and fees on signage violations by small businesses, notices for soil contamination, disposal of dead animals, spillage prevention for cement trucks, and removal of obstructive vehicles. Holden says he stays focused mostly on district concerns, constituent services, and the basics of city government. The most constituent calls his office received in 2019 were about libraries, according to the City Council website.

District 30 is mostly residential, with pockets of manufacturing zones to the west. It’s home to just under 280,000 residents with 92,606 registered voters as of February 1, including 47,267 Democrats and 17,366 Republicans. In Queens community district 5, which covers almost the entire Council district, nearly 40% of residents are foreign born. Just over half are white and more than a third are Hispanic.

“I think I've done an outstanding job,” Holden said in a phone interview. “I hired terrific staff and we get things done. Probably 99% of the work that I handle is quality of life.” He concerns himself more with issues like safety and street cleanliness, and rails against the “the bureaucratic hurdles that this administration throws at homeowners and also middle class and working class residents.”

His pitch for reelection is the same as it was four years ago, that he is civic-minded leader with no regard for political parties or politicking. His priorities are headlined by public safety, education, and ensuring that infrastructure projects in his district are completed, after being paused because of the pandemic. “I want to build a youth center. I want to build senior housing. I want to add more affordable housing...build more parks and hopefully build another high school,” he said. In a district that has been termed a “transit desert” with limited access to mass transit options, he supports creating dedicated busways, expanding express bus service, and building protected bike lanes.

Holden had more than a few choice words for his primary challenger, Ardila, calling the 27-year-old an “opportunist” with no record to speak of. “He's done absolutely nothing. I've done more as a civic leader than he will ever do,” said Holden, who is 69.

Ardila, a first-generation immigrant and Maspeth native, has been critical of Holden’s legislative record and conservative stances, which he says have been directly harmful to working people. As the son of a Honduran-Cuban mother and Colombian father, Ardila has taken particular issue with Holden’s anti-immigrant positions – he pointed out, for instance, that Holden was one of the few Council members who opposed a bill before the Council last year to replace the term “alien” with “noncitizen” in official city records and that Holden quit the Council’s committee on immigration in 2019 when other members refused to meet with ICE officials. “He's voted against diverse communities, immigrant communities, working class communities,” Ardila said in a phone interview.

“Of course he's gonna say these things because he's a socialist who is unhappy about everything that the middle and working class stands for,” Holden retorted.

Ardila, who does not identify or pitch himself as a socialist, said he isn’t running against Holden as much as he is running for the district, arguing for expanding mass transit, reducing class sizes, creating more green spaces, and building more affordable and supportive housing, and listening to its immigrant communities and communities of color. “It's about public service, bringing good representation in a district that's been completely underserved and unfortunately doesn't get the quality that it merits,” he said.

Ardila, who previously worked under Council Member Brad Lander, a Brooklyn Democrat running for city comptroller, has spent the last year as many candidates have, serving people suffering because of the pandemic. In his current position at the Legal Aid Society, he helps people navigate public benefits.

If elected, he has promised to bring back participatory budgeting in the district, which Holden opted out of these last few years. The program provides up to $2 million in grants for small infrastructure and community improvement programs, and allows residents to come up with ideas and vote on how the money is used.

Housing affordability is a significant concern in the district, which has a relatively large number of homeowners, but also a significant proportion of renters, and is somewhat suburban in feel in parts. More than 40% of people are rent burdened in the community district, while homeowners face disproportionate property tax bills. To ease those pressures, Ardila wants to legalize accessory dwelling units – for instance, basement apartments – which would increase housing supply while giving homeowners additional income and also create jobs in construction.

As a former Department of Education advisor, education is among Ardila’s top priorities. He wants to expand dual-language programs and childhood education, particularly since the district has not yet implemented the mayor’s 3K program.

He also wants to create busways and bike lanes, particularly to end the “over-reliance on car culture” and allow people easier access to the large parks that are at the far eastern end of the district.

Unlike Holden, Ardila has called for reducing the NYPD budget to invest in communities and a slew of reforms to policing including ending qualified immunity, which protects police officers from civil legal repercussions and removing police from mental health emergency responses, among other proposals.

Perhaps the one area of agreement between Ardila and Holden is their opposition to new homeless shelters in the district. Though, as Ardila noted, his reasons differ. Where Holden raised largely unfounded concerns about homeless shelters leading to increasing crime and worsening quality of life, Ardila believes the district does not have the support services that can help unhoused people get out of shelter. And with limited access to transit, it would ill serve those who cannot drive. Instead, he wants to “implement a housing-first model where you transition people into permanent housing instead. And we have the vacant land to do it but we just don't have the political will yet.”

Though Holden continues to be popular among the more moderate communities of the district, Ardila believes that it has become more diverse and progressive in recent years even if it may not be as “dark blue” as other gentrifying neighborhoods in Queens. “It's not Park Slope, it's not Astoria, but there's good Democrats here and there's space for inclusive politics for sure,” he said. The fact that Holden lost to Crowley (who is running for Queens Borough President this year) in the 2017 Democratic primary would appear to give Ardila room for optimism, though it looks like Holden is again lining up to run in the general election on multiple party lines.

Ardila’s campaign stumbled last month when the New York Post reported on his history of posting homophobic and racist insults online as a teenager. He subsequently deleted the posts and apologized. “As a high school student, I used offensive language in response to several Facebook comments amongst friends,” Ardila told The Post. “I fully understand how wrong and hurtful that language is and I wholeheartedly apologize.”

Holden does have a slight advantage in campaign fundraising. As of March 11, he had $193,507 in cash on hand while Ardila had $145,635. Ardila has, however, picked up a fair share of endorsements from prominent progressive electeds including a number from Queens such as Borough President Donovan Richards, State Senator Jessica Ramos, State Senator Michael Gianaris, Assembly Member Catalina Cruz, and Council Members Jimmy Van Bramer (who is running for Borough President) and Antonio Reynoso, and former Council Member Costa Constantinides. He’s also been endorsed by his former boss, Council Member Lander, progressive leader Zephyr Teachout, the Working Families Party, the Labor Strong 2021 coalition, which includes SEIU 32BJ, Communications Workers of America, DC37, Hotel Trades Council, and the New York State Nurses Association, and the Road to Justice NYC Coalition, which includes 1199SEIU, Make the Road Action, and Community Voices Heard Power.

Holden has been picking up endorsements recently in an apparent effort to shore up institutional support and show he is well-regarded by colleagues. He is backed by New York State Senators Leroy Comrie and Joe Addabbo, Assemblymember Catherine Nolan, and City Council Members I. Daneek Miller and Karen Koslowitz. He also has a slate of union endorsements including the United Federation of Teachers, the Police Benevolent Association, the FDNY Uniformed Firefighters, the Detectives’ Endowment Association, the NYS Court Officers Association, to name just a few.

Ardila expects that if he should win the primary, Holden will challenge him in the general as he did Crowley. “We're 100% anticipating that's what he's going to do,” Ardila said. There has been some speculation, as first reported by the Queens Daily Eagle in March, that the Republican Party’s candidate for the general, attorney John Spataro, is merely a placeholder though the Queens GOP denied the claim. Holden himself did not address it directly, when asked. “I'm not gonna lose the primary that's not even in my thoughts,” he told Gotham Gazette.