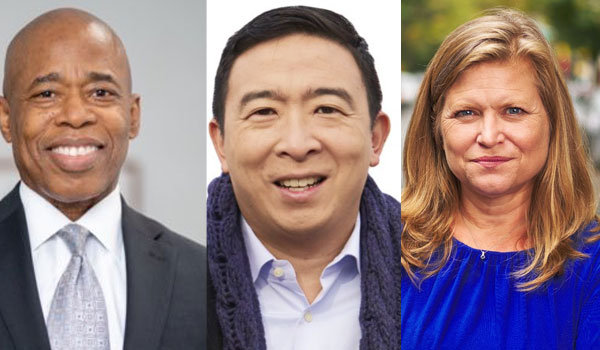 A new poll released late on Tuesday shows Brooklyn Borough President Eric Adams in the lead in the Democratic mayoral primary, with entrepreneur Andrew Yang and former sanitation commissioner Kathryn Garcia tied in second place, though half of all likely primary voters continue to remain undecided.

The poll was the final of three “Pulse of the Primary” polls released ahead of the June primary election by Fontas Advisors and Core Decision Analytics, which had previously surveyed likely primary voters in January and March. The latest poll was conducted between May 15-19 and sampled 800 likely voters by telephone, shortly after the first official Democratic primary debate, which included the top tier of eight candidates also included in the poll. Neither of the firms are associated with any of the mayoral campaigns.

With 50% of voters undecided, Adams received 13% of the vote in the poll, and Yang and Garcia both received 8%. Former nonprofit executive Dianne Morales received 7%, former counsel to the mayor Maya Wiley got 5%, and Comptroller Scott Stringer got just 4%. Former Citigroup executive Ray McGuire and former federal housing secretary Shaun Donovan tied for last place with just  2% of the vote each.

The Fontas/CODA poll also sought to judge whether undecided voters leaned towards any particular candidate. Only 26% said they were completely undecided while 23% expressed preferences for some of the candidates. With the leanings taken into account, Adams’ support rose to 18%, Yang’s increased to 13%, and Garcia was in third with 11%. Wiley and Morales tied with 9%; Stringer got 7%, and McGuire and Donovan were at 4% each.

This year’s race has been notoriously hard to predict, particularly because it will be the first time a citywide primary utilizes ranked-choice voting, which allows candidates to choose up to five candidates in order of preference, and there is a wide, deep, and diverse top tier of candidates, though most of them have been unknown to many voters before this race. Of the top eight Democrats, only two -- Stringer and Adams -- had run for city or state office before. Yang is the only other of the group to run for any office, having pursued the Democratic presidential nomination in the last cycle.

Another poll released Tuesday afternoon by Emerson College and PIX11 News showed Garcia leading with 21% of the vote. That poll surveyed 895 registered voters, including 570 likely Democratic primary voters, on May 23-24 and only used links sent by text message and an online panel to obtain results. It had Adams in second with 20%, Yang in third with 16%, Stringer in fourth with 10%, and Wiley in fifth with 9%.

In the two months since the last Fontas/CODA poll was released, the mayoral race has seen several significant developments. In late April, Stringer was accused of sexual assault and harassment by a former volunteer on a campaign from 20 years ago, at least temporarily stalling his campaign before the crucial closing stretch. He denied the allegations and while he lost several prominent endorsers, several stayed with him and still others have announced their support since. Adams has picked up the endorsement of the New York Post editorial board, among other prominent supporters, including the defection of Rep. Adriano Espaillat from Stringer, shoring up his position at the front. Garcia received the coveted endorsement of the New York Times editorial board and then that of the New York Daily News soon after, giving her a major boost. Meanwhile Yang has seemingly hit several stumbles on the campaign trail, undercutting the momentum he had built. Across a number of different polls he has not been able to grow his vote-share, though he has continued to pick up prominent endorsements like State Senator John Liu, and dominate many news cycles.

While the race appears wide open and fluid, Adams is showing broad support across the electorate. In the new Pulse of the Primary poll, he won the highest percentages among both men and women, voters aged 35 and older, Black and Hispanic voters, and in Brooklyn, Queens, and the Bronx. “Adams just clearly caught Yang and has solidified his position in the top tier, if not the top spot at this point in the campaign,” said George Fontas, founder and CEO of Fontas Advisors, in a zoom briefing on the poll. But Fontas noted the important caveat, that ranked-choice voting makes it hard to determine how the final votes will tally. “No one on this chart is running away with this race,” he added.

Garcia showed a clear advantage with white voters. Morales showed strong support among voters aged 18-34. Yang was almost even with Adams in Hispanic support but ahead with Asians and other racial groups beyond the four largest.

The poll shows that voters are finally beginning to pay attention to the mayoral race, as each of the candidates saw their name recognition increase since the previous poll released in May, with Garcia, Morales, McGuire, and Donovan experiencing significant boosts. Still, Yang, Adams, and Stringer are still well ahead in that category.

But there remains some uncertainty about ranked-choice voting, the poll shows, even if awareness is clearly growing. Only 27% of likely voters said they have heard, read, or seen “a lot” about ranked-choice voting recently while 30% said “some”; 15% said “not much” and 26% said “nothing at all.” Overall, only 57% of likely voters said they intended on picking a second candidate through RCV, while 30% said they would only vote for one additional candidate beyond their top pick, and the rest were unsure what they would do. Notably, Garcia’s supporters showed by far the largest intention to rank a second candidate. Voters are allowed to rank up to five candidates in order of preference in each primary race for city government positions, from mayor through the City Council.